President Barack Obama and his team scored an early success in the President’s visit to India that didn’t really require any effort on their part. The first 45 minutes of the President’s meeting with Prime Minister Narendra Modi was devoted to discussing China, with the U.S. side pleased to find Modi sharing their own concerns about implications of China’s rise for the strategic situation in the region.

Not only were the U.S. and Indian assessments about China congruent; Modi took the initiative in suggesting revival of an informal security network that included the United States, India, Australia, and Japan. 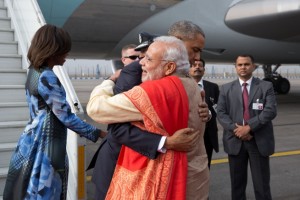 Modi’s posture on this subject was much different from what has characterized India’s overall strategic posture for most of its history since independence. Throughout the Cold War a major element of Indian diplomacy was what bore the label of neutralism, and later was more often called nonalignment.

Neutralism did not sit well at all with U.S. policymakers, some of whom, most notably Secretary of State John Foster Dulles, sharply criticized it. In 1956, Dulles stated, “These neutral governments do not seem to realize that the Communist intentions are so diabolical and so hostile to their freedom and independence.” He said that neutralist countries “would eventually succumb unless they could develop a crusading spirit against the evil forces of Communism.” Dulles especially angered the Indians by referring to their variety of neutralism as “immoral.”

Dulles may have been more unrestrained than most in the language he applied to this topic, but he was reflecting a strong and recurring American outlook that has been applied as well to other situations in international politics. That outlook is one of seeing the world divided fairly clearly between good guys and bad guys, of becoming impatient with those who do not see it the same way, and of using U.S. initiative to get the laggards to take their proper place in the good-vs.-bad lineup. That outlook manifested itself years after the Cold War when President George W. Bush told everyone else in the world that they were either with us or with the terrorists.

Two basic problems have limited the effectiveness of this habitual American approach. One is that many people and governments do not see the global lineup the same way, and they have good reasons not to.

International conflict is just not that simple, and cannot be reduced to such orderly lines. The other reason is that most people and governments do not like being prodded by the United States into standing in particular spots in the lineup as the United States defines it. They would rather reach their own conclusions and make their own decisions in acting on those conclusions. Certainly this last consideration has been for many years a major factor in shaping Indian policies.

A different and better approach for the United States would be more often to let the natural rhythm of the balance of power work. This would be understood by serious realists, for whom balancing in international politics is a core concept.

There is something of a hidden hand at work, akin to how such a hand works economically in free markets. The hidden hand does not write the same script each time, and political scientists have explored the conditions under which balancing rather than bandwagoning is most likely, and vice versa. But if something a would-be hegemon is doing worries us, it probably is worrying others as well.

And thus expansion of Chinese power, including into India’s own ocean, naturally makes Modi worry, without our having to tell him that he should be worried, and makes him willing to do something about it. The favorable result at the New Delhi meeting demonstrates how a balancing approach that relies on others’ own interests and conclusions usually will be more successful than lecturing people, pushing and prodding them into our preferred position, or casting moral aspersions on them.