Though Saudi King Abdullah was a repressive leader at home who contributed to political and sectarian violence across the Middle East, his death is mourned by Western leaders who were dependent on his vast ocean of oil and his vaults full of money, as Sam Husseini explains.

Many are voicing surprise at the comments of International Monetary Fund head Christine Lagarde following the death of the Saudi monarch: “He was a great leader. He implemented lots of reforms, at home, and in a very discreet way, he was a great advocate for woman. It was very gradual, appropriately so probably for the country, but I discussed that issue with him several times and he was a strong believer.”

After a reporter expressed surprise that a woman would say that, Lagarde added: “Very often, Saudi Arabia is portrayed as a place where women do not play quite the same role.” The last sentence hasn’t been seriously scrutinized, but it should be. 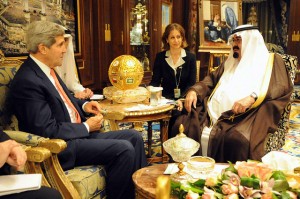 “Quite the same role” is a remarkable way to describe a country that has a system of male guardianship. But I think it’s noteworthy that the source of the comments was hardly some random woman. It was the head of the IMF, an international financial institution purported to aid the global development but that is frequently criticized as doing the bidding of the rich and powerful — such as the major U.S. and European banks.

And, like a good managing director, Lagarde is probably on the lookout for more funding for the IMF, it’s not straightforward to find out how much the Saudis have already ponied up. But once again, we see here the emptiness — even on the most limited basis — of a shallow diversity that seeks to put a woman or African American in a prominent position while maintaining incredibly oppressive power dynamics.

Back in 2011, when the Arab uprisings were in their seemingly promising first year, I vigorously questioned Saudi Ambassador Turki al-Faisal about the legitimacy of the Saudi regime. I did this because I could see what was happening: The uprisings were taking root — and deforming into violent proxy wars — in secular states (Libya and Syria), which were at times somewhat critical of the U.S. establishment — while the pro-U.S. establishment regimes, largely monarchies like Saudi Arabia, were getting let off the hook.

Those repressive monarchies would therefore be able to mold events in the formerly secular states. Democracy, equality and the voice of the people would not be on their list of goals.  So, when he came to the National Press Club, I asked Prince Turki what the legitimacy of the Saudi regime was. I was immediately suspended from the Press Club for my actions, though that was withdrawn by the Club’s Ethics Committee some ten days later.

I was very gratified for having received support from a good number of people during my suspension, but one unfortunate aspect of the suspension is that it drew attention away from what Turki said in our exchange. His first line of defense to my questioning the legitimacy of the regime was this: “I don’t need to justify my country’s legitimacy. We’re participants in all of the international organizations and we contribute to the welfare of people through aid program not just directly from Saudi Arabia but through all the international agencies that are working throughout the world to provide help and support for people.”

I thus wrote at the time: “Turki’s response that Saudi Arabia gets legitimacy because of its aid programs is an interesting notion. Is he arguing that by giving aid to other countries and to international organizations that the Saudi regime has somehow purchased legitimacy, and perhaps immunity from criticism, that it would otherwise not have received?

This is worth journalists and independent organizations pursuing.” I suspect that that’s exactly what we’re seeing manifested in Lagarde’s comments. Some have noted aspects of the collusion between international financial institutions like the IMF and the Saudis, see for example, Adam Hanieh’s piece “Egypt’s Orderly Transition? International Aid and the Rush to Structural Adjustment.”

Too often in poor countries around the world, the form of “development” that’s funded is a collusion between what the IMF wants and what states like Saudi Arabia want. Not exactly a prescription for fostering meaningful democratic development. But an excellent example of back-scratching between elites. Really, a manifestation of my first law of politics: the powers collude and the people get screwed (and not in a good way).

The relativistic part of Lagarade’s comment — “appropriately so probably for the country” — also echoed Turki: “After how many years since the establishment of the United States did women get to vote in the United States? Does that mean that before they got the vote that United States was an illegitimate country?”

Indeed, my questioning of Turki was cut off when I tried to follow up with “So are you saying that Arabs are inherently backward?” — that they should be 100 years behind the U.S.? Though perhaps the most amusing part of Turki’s comments about women was not in response to me, but the obsequious question that followed mine — asked by a worshiping female — where he refers to a “colleague” being “a woman as you can see.”  The initial media wave of calling King Abdullah a “reformer” has brought on some minimal backlash. But it’s largely constrained to domestic issues.

The geopolitical threats to democracy and peace are even more daunting — and full of myth. Saudi Arabia has been a center of counter-revolution and worse in Arab countries. The Tunisian dictator Zine El Abidine Ben Ali fled to Saudi Arabia, as did the Yemeni dictator Ali Abdullah Saleh for a time. The Saudi regime reportedly tried to prevent the Egyptian dictator Hosni Mubarak from stepping down. Saudi Arabia moved into Bahrain to stop a democratic uprising there.

But much of its power is more indirect — for example, through a sizable media infrastructure that highlighted uprisings in secular republics and ignored democratic moves in monarchies.

All this has totally deformed the Arab uprisings the last four years, leading to horrific civil wars and the prospect of wider wars — and it was foreseeable, which is why I and others sought to challenge it from the beginning.

On the U.S.-Saudi relationship, now, the Harvard Political Review tells us: “The partnership was straightforward: Saudi Arabia provided special access to oil for the United States, and in return the superpower developed military installations across Saudi Arabia to advance mutual security goals.”

In fact, it was not about “access” to oil as Noam Chomsky has noted, but about control of oil, as well as investment in Western banks, not in real regional or global development. As Eqbal Ahmed was fond of asking: How did the wealth of the Mideast get separated from the people of the region?

The Saudi regime paved the way for the U.S.’s wars against Iraq and elsewhere, postured as helping the Palestinians while in a tacit alliance with the equally hypocritical Israelis. Saudi regime fosters violent al-Qaeda type violent extremism and its U.S. violent mirror image.

In the 1950s and 1960s, the U.S. backed the Saudis to undermine Egypt’s Nasser and slay the prospect of pan-Arabism. Robert Dreyfuss has written: “Choosing Saudi Arabia over Nasser’s Egypt was probably the single biggest mistake the United States has ever made in the Middle East.”

Though “mistake” is probably wrong — it has benefited elites tremendously at the expense of people in Arab countries, the U.S. and around the world. Liberals love making much of the Bush-Saudi connection, which is true enough, but the Saudi-U.S. bond was forged by the great liberal Franklin Delano Roosevelt.

Shortly after World War I, the British Foreign Secretary “Lord” Curzon spelled out British aims: “Arab faÃ§ade ruled and administered under British guidance and controlled by a native Mohammedan and, as far as possible, by an Arab staff.”

So, similarly to Lagarde’s comments, how could any person awake to global dynamics be surprised by the sorrow from elites in the U.S. or that the British flag should be at half-mast with the passing of so useful a native?