In many ways, America has become the anti-empirical empire, a superpower where many political leaders divorce themselves from facts. Few examples are more glaring or dangerous than the continued denial of global warming despite the latest evidence of impending catastrophe, as ex-CIA analyst Paul R. Pillar explains.

The graphic that was on the front page of the New York Times on Saturday is striking. It accompanied a story about how 2014 was Earth’s hottest year on record. There is a bar chart showing how average global temperatures have been rising over the past century and markedly so since the 1970s, and how the ten warmest years have all occurred since 1997.

But just as eye-catching is a world map that uses color to depict how temperatures in different areas of the globe in 2014 differed from the average for each area: red for hotter and blue for colder, with the intensity of the color indicating how much of a divergence there was from the average. As would be expected with the hottest year on record, most of the map is red. 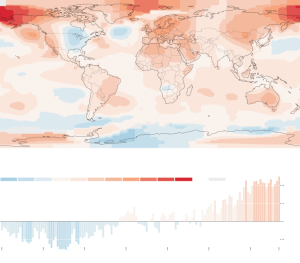 New York Times graphic based on data from NASA and the National Oceanic and Atmospheric Administration.

But given that temperatures do not vary uniformly around the world, there is some blue. And the one patch of blue that covers an area with any significant population happens to be over the central and eastern United States, with some adjacent parts of Canada. (Remember those wayward polar vortices last winter?) The only other blue areas that are over parts of continents are in eastern Antarctica, which is uninhabited, and a small piece of northern Namibia and southern Angola, in one of the more sparsely populated parts of Africa.

If weather were the product of some sort of intelligent design, this pattern might lead one to conclude that the designer wanted to tilt debate in the United States on climate change in favor of the climate-change-deniers. No matter how many reminders experts issue that short-term variations in weather are not to be equated with longer term climatological change, there is nothing like a good blast of cold air through Washington to cool receptivity to messages about the need to slow and arrest global warming.

There still would be plenty of ostrich-in-the-sand denial on this issue regardless of the current weather, but in general the less that Americans are directly and immediately feeling ill effects of a problem, the less likely that U.S. policy will be shaped to deal with the problem.

This correlation is most obvious with the climate change issue itself, but is not limited to it. Terrorism, for example, is a phenomenon rooted in circumstances and policies that are spread across many countries but that usually leads Americans even to recognize that a problem exists only if they themselves are hit with some of the consequences.

And even though terrorist attacks involve human volition, exactly where and how terrorist consequences emerge out of larger patterns of political and social dysfunction involves, like any one year’s weather, essentially unpredictable variation. There is no overall intelligent design.

Grabbing the American public’s attention requires not only an impact on Americans themselves but an impact that is, like a city full of hot uncomfortable air, obvious and impossible to miss. Consequences for Americans and U.S. interests can be substantial but still missed without that kind of immediacy and obviousness.

This is true even when the consequences flow from actions taken by the United States itself. It is true, for example, of the economic harm to the United States of U.S.-imposed sanctions. It is true as well of many ways in which other countries and peoples impede the projection and exercise of American power overseas.

The blue patch hovering over most of the United States in that map in the Times thus can stand for more than just last year’s respite for some of us from the heating up of the planet. It also can represent a more general pattern of ignorance of much of the red vastness beyond U.S. borders. It can be thought of as a blue haze that miraculously protects us from the immediacy of much of the world’s problems but also obscures our understanding of them. The only difference from what the map depicts is that the phenomenon does not stop in the high plains but instead also includes the western United States.

← The West’s Help to Islamic Jihadists
Jesus as Whistleblower →

4 comments for “The Anti-Empirical Empire”