The Western reaction to last week’s terror attacks in Paris has been rife with double standards as U.S. and European politicians and pundits reinvent themselves as purists on freedom of the press and compound the hypocrisy by ignoring the longstanding slaughter in the Middle East, John V. Walsh observes.

To understand the attack on Charlie Hebdo in Paris last week, we need only invert George W. Bush’s 2005 mantra that “We’re taking the fight to the terrorists abroad, so we don’t have to face them here at home”, into the more truthful: “They will continue to attack us over here so long as we slaughter them by the millions over there.”

In a word, this is one more instance of blowback, as Ron Paul tells us in his perceptive essay, “Lessons From Paris.” Among other things Paul points out: “The two Paris shooters had reportedly spent the summer in Syria fighting with the rebels seeking to overthrow Syrian President Assad. But France and the United States have spent nearly four years training and equipping foreign fighters to infiltrate Syria and overthrow Assad! In other words, when it comes to Syria, the two Paris killers were on ‘our’ side. They may have even used French or US weapons while fighting in Syria.” 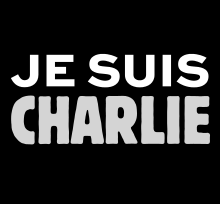 The slogan used to show support for the Charlie Hebdo journalists killed by Islamist terrorists in Paris on Jan. 7, 2015.

To grasp the magnitude of the neocolonial savagery of the U.S. and its allies in the Middle East, a catalogue of the recent offenses is a necessary beginning. A partial accounting of Western barbarism is to be found in “Destructive Western Mideast Policy Makes Radicals” by Muhammad Sahimi.

Sahimi closes his essay by saying, “Indeed, so long as the abuses of the Western dominance of the Islamic world provides the fertile ground for extremist Muslim clerics and preachers to espouse their reactionary interpretations of Islam, a religion of peace and mercy, things will not get any better.”

The killings in Paris, horrific as they are, are but pinpricks compared to the vast devastation visited by the West on the Muslim world and indeed on most of the planet over the last centuries of colonialism and neocolonialism which has brought humiliation, genocide and grinding poverty to entire continents and continues to do so.

What has been the response in the West to the attacks in Paris? On what do the apologists for Empire focus in the wake of this act of vengeance for the neocolonialism of the West against the Arab and Muslim world? With utter contempt for history and context, the pundits discuss freedom of speech as the central issue.

Freedom of speech in France where it is a criminal offense to “deny” the Holocaust of European Jews. Where an anti-Semitic remark, even one overheard in a bistro, can land one in considerable trouble, with loss of one’s job and a fine. Where an offhanded comment cost a writer at Charlie Hebdo his job because it was deemed anti-Semitic.

Where the predecessor to CharlieHebdo, Hari-Kiri Hebdo, was banned decades back when it took a swipe at Charles DeGaulle, just after his death, resulting in its rechristening itself as Charlie Hebdo on reopening. And where anti-Islamic insults in the mass media are just fine.

The most effective riposte to the canard that the attack on Charlie was an attack on freedom of the press has come from Glenn Greenwald in his piece entitled “In Solidarity With A Free Press. Some More Blasphemous Cartoons.” It is illustrated with some of the anti-Islamic hate cartoons that graced the pages of Charlie along with a number of others whose publication would be a criminal offense in France and elsewhere in the West.

Be sure to scroll all the way down. The piece should go viral, because the cartoons alone taken in sequence expose the hypocrisy of the Western punditocracy and its masters. They object to some of the cartoons but not others (the first two), whereas one should object to them all, except for the last eight by the Brazilian cartoonist Latuff.

Read, look and think. There is genuine fear in the West when it comes to publishing this essay because its points are piercing indeed, imperiling the bubble of hypocrisy.

On then to the grand march on Sunday in Paris, a march which Justin Raimondo rightly calls “March of the Hypocrites.” As Raimondo points out, there are many dimensions to this hypocrisy, but the most deserving of ridicule is perhaps the heinous record that most of the “world leaders” present have when it comes to freedom of the press.

A partial compilation of their abuses of the press has been assembled by Daniel Wickham, a student at the London School of Economics, titled “These ‘staunch defenders’ of the free press are attending today’s solidarity rally in Paris.”

The consequences of the Charlie Hebdo affair are all too certain. It will strengthen the hand of those who are clamoring for more military involvement by the Empire in the Middle East.

Chairman of the Joint Chiefs of Staff, General Martin Dempsey, in an interview reported on Fox, made it quite clear that “we” would have to do “more.” He describes a great “arc” of terrorism running from Pakistan to Nigeria and perhaps beyond where the U.S. would have to increase its operations and vigilance.

He was almost smiling with satisfaction. More money will surely come his way and the way of the entire Military Industrial Congressional Complex. (Dempsey cautioned that “we” are already doing “a lot,” but “more” is the order of the day.)

The head of the National Security Agency was also clamoring for “more,” to spy on you and me, dear reader. When these imperial potentates spoke I could hear the anguished cries of the Muslim peoples to be submitted to more attacks and bloodshed in the great “arc” that Dempsey was drooling over “patrolling.”

But this reaction may yet prove the undoing of the Empire. For the U.S., already gone mad with imperial arrogance and overreach, is being goaded to further frenzy by its client, the apartheid state of Israel, a European colonial settler state itself. Hence the U.S. is becoming ever more stuck to the Middle Eastern tar baby.

That gives breathing room for Russia and China and the rest of the developing world to grow and assert their independence from the Empire. The great crime is that the peoples of the Middle East are absorbing the lion’s share of the blows dealt by the Empire. Our job in the West is to get the U.S. out of the Middle East and to end the perpetual economic and military wars of the Empire across the planet.

As Mikhail Gorbachev and others have pointed out, the alternative is surely WWIII.

John V. Walsh writes for the Unz Review, Antiwar.com, CounterPunch.com and DissidentVoice.org. He can be reached at John.Endwar@gmail.com.

← NYC’s Riptides of Free Speech
‘Justice’ Hidden Behind a Screen →

3 comments for “A ‘Free Press’ and Double Standards”