Official Washington’s “tough-guy-ism” the one-upping macho rhetoric about how to respond to foreign crises makes it hard for leaders to avoid wars and perhaps even harder to end wars, a dilemma addressed by ex-CIA analyst Paul R. Pillar.

Americans are not very good at ending their involvement in wars. No, that’s not a pacifist statement about a need to stop fighting wars in general. It is instead an observation about how the United States, once it gets involved, for good or for ill, in any one war, has difficulty determining when and how to call it a day and go home.

A major reason for this difficulty is that Americans are not Clausewitzians at heart. They tend not to see warfare as a continuation of policy by other means, but instead to think of war and peace as two very different conditions with clear dividing lines between them. 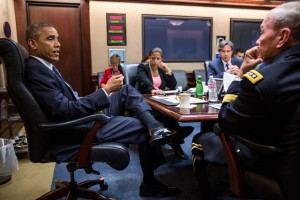 Americans thus are fine with wars that have as clear an ending as the surrenders of the Axis powers in World War II, which continues to be for many Americans the prototype of how a war should be begun, conceived, and concluded. But America’s wars since then have not offered conclusions this satisfying.

The one that came closest to doing so was Operation Desert Storm in 1991, which swiftly and decisively achieved its declared objective of reversing the Iraqi swallowing of Kuwait. Even that victory, however, left an unsatisfying aftertaste in some (mostly neocon) mouths, because Saddam Hussein remained in power in Baghdad.

It thus is difficult for U.S. leaders, even if they are capable of thinking in disciplined Clausewitzian terms, to explain and to justify to the American public, and to the political class that makes appeals to that public, the wrapping up of an overseas military involvement without a clear-cut, World War II-style victory. This is a problem no matter how well-founded and justified was the original decision to enter a war.

Other dynamics are commonly involved in such situations, including the one usually called mission creep, the tendency in an overseas military expedition for one thing to lead to another and for one’s military forces gradually to take on jobs beyond the one that was the original reason for sending them overseas. Any nation can get sucked into mission creep, but Americans are especially vulnerable to it.

The yearning for clear-cut and victorious conclusions to foreign military adventures is one reason. Others are the American tendencies to see any problem overseas as a problem for the superpower to deal with, and to expect that if the United States puts its minds and resources to the task it can solve any problem overseas.

Some insights about this subject can be gleaned from comparing two big recent U.S. military expeditions: the one in Iraq from 2003 to 2011 and the one in Afghanistan that began in 2001 and continues today. There is no comparison between the two regarding the original reasons for initiating them, and in that sense it is unfortunate how much the two came to be lumped together in subsequent discussion.

One was a a war of aggression with a contrived and trumped-up rationale; the other was a direct and justified response to a lethal attack on the United States. Iraq really was the bad war and Afghanistan the good one. But as time and costs dragged on and Afghanistan became America’s longest war ever, it gradually lost support among Americans and Afghans alike.

The failure in Afghanistan was in not finding, and taking, a suitable off-ramp. The off-ramp that should have been taken was reached within the first few months of the U.S. intervention, after the perpetrators of the 9/11 attack that was the reason for the intervention had been rousted from their home and their sometime allies, the Afghan Taliban, had been ousted from power.

Regardless of what would have happened in Afghanistan after that, there would not have been a return to the pre-September 2001 situation there, both because the Taliban would have no reason to ally again with a bunch of Arab transnational terrorists who had brought about such a result, and because the United States’ own rules of engagement changed so much that no such return would be allowed to occur whether or not U.S. troops were on the ground.

No good off-ramp was found with the Iraq War, and there never was going to be a really good one, given how ill-conceived the war was in the first place and how little thought the makers of the war had given to the post-invasion consequences.

The U.S. administration that perpetrated the war did a political finesse of the problem, using a surge of force to reduce the violence in the civil war enough to be able to say that they did not leave Iraq falling apart, and then setting with the Iraqi government a schedule for U.S. withdrawal that would have to be implemented by the next administration.

That set the stage, of course, for promoting the myth that the war had been “won” by the time power was handed over in the United States and for blaming the subsequent administration, when it duly implemented the withdrawal schedule it had been given, for all the later indications that the war clearly had not been “won.”

It also set the stage, now that the United States has troops back in Iraq, for talk about the need for a “long-term American presence” to avoid repeating the supposed mistake of cutting and running. How long is “long-term” does not get specified. In other words, no off-ramp is identified. In other words, it’s again the familiar problem of not knowing how and when to wind up involvement in a foreign war.

The error committed in Afghanistan, of missing the ramp and turning what had been a justified response to an attack on the U.S. homeland into an endless attempt at nation-building in a country thousands of miles away, risks being repeated in Iraq.

The problem of ISIS, the reason for the latest intervention in Iraq, will go away, but not in a sufficiently clear-cut manner to satisfy the American yearning for victory and for drawing bright lines to mark the division between war and peace. There won’t be a surrender ceremony on the deck of a tugboat, let alone a battleship.

The Obama administration needs to articulate as clearly and specifically as possible what the off-ramp will look like, a formulation such as “ultimately destroy” ISIS doesn’t cut it. Public opinion needs to be prepared for a departure from Iraq that makes sense in terms of the specific U.S. interests served while being much less satisfying than securing someone’s unconditional surrender or complete and unambiguous destruction. If departure is not to come from anything but impatience and exhaustion, the only other alternative is an endless U.S. military presence.

And an endless presence is no solution at all. It certainly is not from the standpoint of wise use of U.S. resources. Nor would it be from the standpoint of solving Iraq’s problems, given how any such solution depends on political accommodation of differences among Iraqis themselves, and given the resentments that arise from the inevitable damaging effects of the use of U.S. military force, another lesson from the war in Afghanistan.

2 comments for “The Challenge of Ending Wars”