James Risen sat alone in the far corner of the expansive hallway outside the courtroom. It was a fitting beginning for a day in which he seemed alone, even apart from his lawyers.

Risen was there in response to a government subpoena to testify in a pre-trial hearing in the case of Jeffery Sterling. The government claims that Sterling, while working for the CIA, was a source in Risen’s reporting on an alleged U.S. government scheme to transfer flawed nuclear weapons blueprints to Iran more than a decade ago. 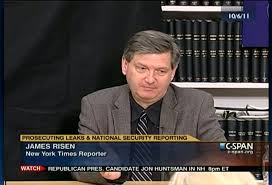 Risen’s testimony on Monday featured him stalling government questioning, but ultimately relenting and responding to limited queries from the government, defense and the judge regarding his reporting, as anticipated by Marcy Wheeler for ExposeFacts. However, Risen had made clear before, and repeated today, that he would not reveal who his confidential source or sources were, and in the end no one actually asked that question.

There was no dramatic: “The government calls Mr. Risen to the stand.” Instead, District Judge Leonie Brinkema, after noting that the government had called Risen, said: “Mr. Risen, would you go to the witness stand?”

After confirming from Risen that he’d authored numerous articles relevant to the government’s case against Sterling, the government lawyer repeatedly asked regarding chapter 9 of his book State of War some variation of: “Did you have a confidentiality agreement with source or sources?”

After several go-arounds, the judged chimed in: “Mr. Risen, that is not an answer to the question,” and then noted that his attorney did not object to the question about if he used confidential sources. Risen responded: “That’s not the question he asked.”

The judge asked the lawyer for the prosecution, James Trump, to rephrase and he did. The prosecution proceeded to unpack their questions, which Risen initially repeatedly refused to answer with some variation of: “I decline to answer that question because I don’t want to help prove or disprove the mosaic that the government is attempting to create here.”

This included questions regarding what other methods of reporting Risen might use besides confidential sources. However, the government lawyer eventually drew from Risen’s past affidavits where he did respond to such questions. At some points, it appeared Risen was unfamiliar with his prior affidavit, or was at least highlighting the fact that he was compelled to testify.

At one point the judge raised the prospect of perjury. After another question from the prosecution, Risen said: “Can I talk to my lawyers?” and the judge gave a five-minute recess.

After the recess, Risen gave terse, “yes” or “no” replies to the government lawyer. These included acknowledging that he used other methods in his reporting besides sources, including congressional testimony; that he went to Vienna to report on nuclear issues, and, finally, that Sterling was a named source in a previous story by Risen.

The prosecution repeatedly asked if Risen would divulge who his unidentified sources were if asked and he said he would not. But they never actually asked.

A seemingly exasperated Edward MacMahon for the defense stressed that in the drawn-out case of Mr. Sterling, the government had gone to such extraordinary lengths to compel Risen to disclose his source or sources and then, when they had him on the stand, never asked the question.

The defense also highlighted a document that had apparently been described by some as a book proposal for State of War, but that Risen described as promotional material for a book fair. At one point, Risen questioned how the government obtained such a document, leading to laughter in the court and the judge to respond: “It doesn’t work that way”, that Risen wasn’t permitted to ask questions here.

At least one question seemed to suggest that at times Risen may have presented information as true in his own voice when it may have been based on an allegation by an unidentified source.

The judge, whose court does not allow recording devices, asked the journalist about his use of quotes, italics and regular text. Risen hesitated and then remarked that writing books allows the writer to assert his own voice more than regular newspaper writing.

The defense quoted at length from prior statements by Risen about the need to scrutinize government claims about WMDs regarding Iran, citing the “flawed” intelligence prior to the 2003 invasion of Iraq.

Sam Husseini is communications director for the Institute for Public Accuracy. Follow him on twitter: @samhusseini. [This article was originally produced for ExposeFacts.org.]