The police officer who killed Michael Brown convinced a St. Louis grand jury not to indict by likening the unarmed 18-year-old black man to “a demon” who looked “mad that I’m shooting at him” language reminiscent of an earlier era when whites saw blacks as frightening sub-humans, writes William Loren Katz.

The murder of Michael Brown in Ferguson, Missouri, illustrates that even when an offending officer is brought before a grand jury, he can explain away why he fired shot after shot at an unarmed suspect — and have jurors wave him home unpunished, perhaps a hero.

The death of Eric Garner in New York shows that a police officer can commit murder using a banned chokehold in broad daylight while being videotaped by a bystander and still avoid indictment. [Remember the similar situation surrounding Rodney King’s beating in Los Angeles?] 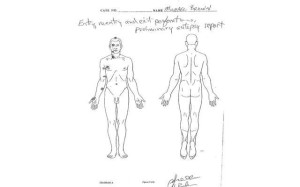 The autopsy drawing of Michael Brown’s body after the 18-year-o;d was gunned down by a police officer in Ferguson, Missouri.

In both instances, the police also left their victims on the street, Brown lying dead for four hours and Garner for precious minutes when swift medical treatment might have saved him. In their behavior, the police were twice giving a negative answer to the question: “Do black lives matter?”

Since nothing exists in the DNA of white police officers or other white people that leads to race-driven murder, the motivation of these armed guardians of the law lies elsewhere. The only available testimony today is from Officer Darren Wilson before the St. Louis County Grand Jury as he threw useful light on how he saw his deadly confrontation with Michael Brown.

Both Brown and Wilson were over six feet tall and over 200 pounds. But Wilson who was armed compared himself to “a five-year-old holding onto Hulk Hogan.” To him the unarmed suspect “looks like a demon, that’s how angry he looked.” Further he “was almost bulking up to run through the shots, like it was making him mad that I’m shooting at him.”

Wilson’s words rang bells in my historian’s mind; it took me back to 1900 when the American Book And Bible House of St. Louis published a popular justification of lynching entitled The Negro A Beast. This was during the long reign of “Judge Lynch” when white individuals, lawmen or mobs killed three or four black men and boys a week, enjoyed impunity and often the approval of governors, senators and local officials.

Even leading Northern politicians greeted lynching with indifferent shrugs or vague support. “Progressive” President Theodore Roosevelt, for example, advocated white “racial selfishness” and stated, “It is wholly impossible to avoid conflicts with the weaker races.” While TR stated his opposition to lynching, he also sternly lectured black audiences that their “rapists and criminals did more harm to their race than any white man can possibly do them.”

One of the historical echoes of Wilson’s striking testimony can be found in South Carolina Sen. Ben Tillman’s classic defense of lynching on the floor of Congress on Jan. 21, 1907. During his term as governor and four terms in the U.S. Senate, Tillman considered lynching a messy but needed part of the legal process.

This grew out of the Senator’s vision of a giant struggle “between barbarism and civilization, between the African and the Caucasian for mastery.” Violence assured the white community that the black enemies would be kept “in their place,” segregated, working for and fearful of whites and never dare to demand the right to vote, sue, testify in court or sit on a jury.

Tillman began by strumming a familiar Southern white chord: “the black rapist.” Tillman said: “I would lead a mob to seek the brute who had ravished a woman.” The “brute” he said, was “negroes . . . a black flood of semi-barbarians,” “a lurking demon,” “the Beast leans forward, huge and black.”

Despite this terror, Tillman said he was not in favor of burning accused rapists to death. Neither was he a bigot: “I have never called them baboons.” But he added, “some are so near akin to the monkey . . . the missing link,” “a creature in human form.”

Tillman’s words assured those who lynched African-Americans that they had the political support and the personal sympathy of powerful people and government institutions.

In our age of repeated police shootings of unarmed black men and boys, North and South, our schools and media rarely shine a light on America’s centuries of lynching nor the racist images and language that accompanied the violence. No leader of either race can seem to get a national discussion going about this painful topic.

More than a century ago, Tillman spun his provocative visions: “brute,” “lurking demon,” “bulk” “fiend.” Did Tillman’s words somehow seep into the largely white St. Louis Grand Jury that announced, in effect, that suspect Michael Brown did not deserve to live? Or the Staten Island Grand Jury that let off the police killers of Eric Garner?

Does Tillman’s fearful, angry nightmare still haunt today’s police departments, grand juries and many whites, even those who oppose racism? Hasn’t enough already gone wrong to prove we need to talk to each other openly and honestly before more bodies of unarmed black men and boys are left in the street like refuse?

William Loren Katz is the author of Black Indians: A Hidden Heritage and forty other history books. His website is: www.williamlkatz.com