Exclusive: Columbia Pike has long been the most neglected corridor in Arlington, Virginia, despite or perhaps because of its historic role as the freedom trail for thousands of African-Americans fleeing the Confederacy and slavery. That neglect now has a new chapter as a planned Streetcar is killed, reports Robert Parry.

When President Abraham Lincoln signed the Emancipation Proclamation on Jan. 1, 1863, thousands of African-Americans began trudging north escaping the slaveholding Confederacy, finally reaching Union defenses in Arlington, Virginia. Many came via Columbia Pike, then the principal roadway to Washington DC and what became their freedom trail.

Some of these former slaves joined the U.S. Colored Troops training at nearby Camp Casey and went on to fight to eradicate slavery once and for all. Considered “contraband” or runaway slaves by the Confederates, the Colored Troops were sometimes subjected to summary executions if captured in battle. By the end of the war, they represented ten percent of the Union Army. Some 2,751 perished as combat casualties during the last two years of the war. 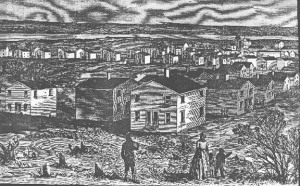 Freedman’s Village as it appeared in Harper’s Weekly in May 1864.

Meanwhile, many African-American families were settled along Columbia Pike in what had been Gen. Robert E. Lee’s plantation before he deserted the U.S. Army and became commander of Confederate forces. In 1863, as the flow of former slaves became a flood, U.S. Congress created Freedman’s Village as a semi-permanent refugee camp on land that now includes the Pentagon, Arlington National Cemetery and the Air Force Memorial.

Freedman’s Village survived until the end of the Nineteenth Century when it was disbanded with many of its residents moving into the historic black neighborhoods of South Arlington. However, by then, the white power structure had reasserted itself across the Old South. Segregation was the law of Virginia, enforced by lynching and other abuses while the federal government did little to intervene.

By the early Twentieth Century, there was also a fetish about honoring Confederate leaders. To drive home the point of who was in charge, the Daughters of the Confederacy in 1920 had the state government name a portion of Route One, which skirted South Arlington’s black neighborhoods, in honor of Confederate President Jefferson Davis, a dyed-in-the-wool white supremacist who had favored keeping African-Americans in chains forever.

This history is relevant again because it is the fact that South Arlington has remained the most racially diverse part of the county now with many Latinos and Asians as well as blacks and whites that has contributed to its perennial neglect. That was how things were during segregation and it is how they still are. Indeed, since the end of segregation in the 1960s, the divergence between predominantly white North Arlington and racially mixed South Arlington has widened, not narrowed.

Billions upon billions of taxpayers’ dollars have been invested in North Arlington, especially with the state-of-the-art Metro, both the Orange Line, which gives easy access to Washington, and the new Silver Line, which will reach Dulles Airport. This modern transportation system has spurred private development and has produced a financial windfall for residents lucky enough to have owned property in North Arlington.

There has also been pressure on the County Board to provide amenities suitable for the higher-income white professionals who live near the Orange Line, such as a $2 million “dog park renovation” near the Clarendon stop. By contrast, one of the biggest public works projects for South Arlington was an expanded sewage treatment plant to handle the increased sewage flow from North Arlington.

It’s not that there weren’t plans for some improvements along depressed and shabby Columbia Pike, where you’ll find check-cashing services and down-in-the-mouth strip malls. Initially, there was supposed to be a Metro line, but that was scrapped for financial reasons.

Then, early last decade, a series of neighborhood meetings were held to discuss how to improve the Columbia Pike corridor. It was at one of those meetings that an elderly black man rose to voice a longstanding complaint, that the historic black cemetery on Columbia Pike had been dug up to make room for a hotel.

A consensus emerged that it was important to retain the area’s ethnic diversity and its affordable housing while simultaneously making it less of a congested commuter pass-through. At the center of the plan was what amounted to a consolation prize for losing out on the Metro, a much cheaper light-rail Streetcar.

Finally, the County Board got around to the Columbia Pike Streetcar, though over the intervening decade the projected price tag had risen substantially. Some opportunistic politicians and the local newspaper, the Sun-Gazette, which doesn’t even bother to distribute in much of South Arlington with its less desirable demographics, saw a useful wedge issue: why should money be “wasted” on South Arlington.

It turns out that one of the easiest political sells in the Old Confederacy is still to get white people to resent spending money on the black and brown parts of town even though possibly as much as half of the Streetcar budget (or around $150 million) was coming from the state (with much of the rest coming from a business transportation tax and nothing from homeowners).

So, when Republican John Vihstadt, who was running as an Independent on what amounted to a Tea Party anti-government platform, made killing the Columbia Pike Streetcar the centerpiece of his County Board campaign, the outcome had the feel of inevitability. Money poured in to Vihstadt’s campaign, so much so that he was able to put on television commercials in prime time.

Though unable to compete financially, Vihstadt’s Democratic opponent, Alan Howze, managed to hold his own in South Arlington. But Vihstadt ran up huge margins in North Arlington and won in a landslide.

The shaken Democrats were soon ready to run up the white flag, though they still held a three-to-two majority on the County Board. Abruptly, two North Arlington Democrats, Jay Fisette and Mary Hynes, switched sides on the Columbia Pike Streetcar, leaving only Walter Tejada, the County’s top Hispanic leader, favoring going forward.

But almost no one in Arlington wants to talk about the issue of race or the historical reasons why Columbia Pike and South Arlington are the way they are. The white people of North Arlington seethe over any suggestion that the continuing neglect of South Arlington has any racial aspect to it at all. They see themselves as living in a post-racial world with enlightened attitudes about non-white people.

However, everyone knows that it remains common practice in Arlington for realtors to steer young white professionals away from South Arlington because of “the schools,” which amounts to a code word for the area’s racial diversity. My disgust with this sly appeal to racism was why I bought a house in South Arlington in 1978 and sent all four of my children to “the schools.”

What I didn’t anticipate was that Arlington County would blithely continue to favor white North Arlington and do so little for racially diverse South Arlington, essentially maintaining the discriminatory pattern of public investments that were the rule during segregation.

So, when it comes to investing public money in Columbia Pike, the road that became the pathway to freedom for thousands of African-Americans escaping slavery, it has been decided that those people along the Pike don’t deserve anything approaching a modern, fast-moving and neighborhood-friendly system — even if that decision means turning back $150 million to the state for spending in other parts of Virginia.

While many of the upwardly mobile people of North Arlington now can operate almost car-free by using the Metro augmented by Zip cars and Uber taxis the people of South Arlington are told to make do with buses and the assurance that race has nothing to do with the disparity.

And, in case you’re wondering, the stretch of Route One through South Arlington is still called Jefferson Davis Highway. When I tried to make this outrage a county issue, I was told by a senior Arlington Democrat that any effort to rename it would simply be too divisive.

[For more on this topic, see Consortiumnews.com’s “Shameful History of Jeff Davis Highway” and “Is Arlington County, VA, Racist?”]

← Asking Christians about Tolerance of War
The Impending Failure in Afghanistan →