Isaiah, one of the great Jewish prophets, was an advocate of peace whose words inspired Jesus’s non-violent teachings centuries later and continue to resonate to the present day, writes Rev. Howard Bess.

African-Americans have given us a great gift of songs that we call “spirituals.” One of the greatest is “Down by the Riverside,” which paints a picture of a new Christian believer walking down to a river to be baptized. The song begins “I’m gonna lay down my sword and shield down by the riverside.”

The song’s refrain ends with the words “and study war no more,” words drawn from Isaiah 2:4, part of the great anti-war writings in the Old Testament. 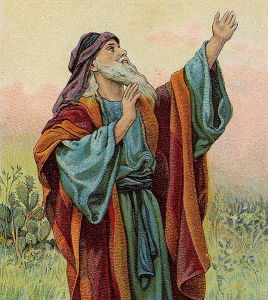 In the Eighth Century BC, the prophet Isaiah was weary of the wars of the nation of Judah, with the Israelite nation split in two through a fight for control of the throne of David. The leadership of the nation of Judah (the southern portion of ancient Israel) believed peace (shalom) could be established through power of shield and sword, but Isaiah argued that peace would come when people took the ways of the Lord seriously. According to Isaiah, the process must begin with the laying aside of sword and shield, and forever forsaking the absurdity of war.

A “school” of Isaiah developed around this prophet that lasted at least 200 years. His followers maintained his anti-violence, anti-war stance. Centuries later, Jesus from Nazareth embraced the thinking of the Isaiah school as an anti-war, anti-violence prophet.

These Bible truths surged into my thinking over the last few weeks of the 2014 political campaign. Both Sen. Mark Begich and now Sen.-elect Dan Sullivan vowed that they would “fight for Alaska.” Other candidates shouted the same message: “I will fight for you.”

But I reject the offer. My response is to say “No thanks; I do not need or desire someone fighting for me.” I make this response as a believing and practicing Christian.

We are still involved in searching for the facts of the life of the Jesus of history. However, some issues are clear. Jesus was born and raised in the village of Nazareth in Galilee, an area populated by poor, disenfranchised Jews. They were powerless and angry.

Reza Aslan’s book Zealot does a great job of describing the political, social, economic and religious context in which Jesus grew up. Galilee was the seed-bed of the Zealot movement. In the days of Jesus’s ministry, the Zealot movement was not unified and self-appointed leaders abounded, although it eventually became organized and unified. Yet, one thing characterized the entire movement. It advocated the violent overthrow of Roman occupiers, the oppressive rich and those who controlled the Temple in Jerusalem. Many Zealots carried concealed knives.

Was Jesus a Zealot or was he a prophet in the Isaiah tradition of no swords or shields? Aslan concludes that Jesus was a Zealot at heart and did not back away from the Zealot commitment to violence. Many other scholars are taking the opposite view, insisting that Jesus ministered in the context of the Zealot movement, shared the same concerns and wanted justice for all, but Jesus advocated a different path. He taught love, kindness and justice as the way to establish the kingdom of God on earth.

I believe that Jesus was a political, social, economic and religious activist with non-violent commitments, which I think is the better reading of the material that we now have. Seeing Jesus as a devout Jew in the Isaiah tradition of non-violence makes sense to me and it is consistent with the best of modern scholarship.

How does all this translate into American politics in the early 21st Century? First, if Jesus was in fact as active in the political world as it now appears, no serious follower of Jesus can avoid involvement in the public arena. The idea of keeping your religion out of the political world is not an option.

One of the pleasures of living in Alaska is the ease with which a person can become acquainted with political office holders. I have a first-name relationship with ex-governors, U. S. senators, members of the state legislature, heads of state departments, mayors and city councilmen. I have expressed my opinions to them on a variety of subjects; I have contributed to political campaigns; however, I have never asked for a favor for myself.

After the November election here in Alaska, I decided to ask every political figure that I know to stop using the word “fight” to describe their public service. I will make the request to help rid our society of fighting public officials. I want to be represented; I want my public officials to advocate, serve, work, even argue on behalf of justice, generosity, grace and peace.

I have decided to lay down my sword and shield and clean up my political vocabulary. I am going to ask every political person I know to do the same and to study war no more. We need good government, but we have no need for fighting representatives. This is the Jesus way.

5 comments for “Learning the Lessons of Peace”