A week has passed since President Obama surprised everyone with a strong statement in support of Net neutrality, declaring that the Internet should be available to everyone, reclassified under Title II of the Telecommunications Act as a common carrier a public utility like telephone service or electricity without special privileges to companies willing to pay a premium for faster, more exclusive access.

In those seven days, opposition from the telecom and cable companies and their supporters in Congress has countered the initial, intense burst of enthusiasm from the media reform community. And the big question remains: when push comes to shove, where will Federal Communications Commission Chair Tom Wheeler an Obama loyalist but former lobbyist for the telecom and cable industries land? 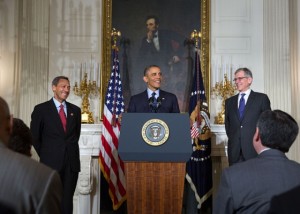 Opinions vary, and conflicting accounts of a meeting with Wheeler deepen the uncertainty. In theory at least, the FCC’s decision-making process is independent from presidential or congressional pressure, and whatever choice Wheeler makes will need the support of the other two Democrats on the commission to make it stick. Most believe he’ll have that backing but the roller coaster ride continues.

Here’s a summary of the state of play.

Public opinion. Consistently, surveys indicate that Americans strongly favor Net neutrality when they know what it is. That includes those who consider themselves politically conservative, contrary to this Alex Jones rant.

A poll from the University of Delaware’s Center for Political Communication, released on the day of President Obama’s announcement, finds that 81 percent of those surveyed oppose “allowing internet service providers [ISPs] to charge some websites or streaming video services extra for faster speeds,” with only 17 percent in favor.

A poll by Vox Populi conducted in late October for the Internet Freedom Business Alliance concludes, “When confronted with some of the implications of ending net neutrality such as ISPs having the power to charge tolls, give different access speeds to a variety of providers and limit freedom to access content, conservatives were as concerned or more concerned than liberals. Conservatives also shared the concern of liberals that giving ISPs these powers could worsen the digital divide. This suggests that conservatives do indeed support the underlying principles of net neutrality.”

The problem, as the University of Delaware poll reveals, is that “most Americans say they have heard little or nothing about the topic;” fully half of them answering “nothing at all.” But interestingly, their survey “reveals that viewers of satirical shows such as John Oliver’s Last Week Tonight and The Colbert Report are far more aware of the issue than consumers of traditional news sources.”

Congress. We mentioned last week that although Congress does not have direct control of the FCC, it can make trouble through control of the commission’s purse strings and its power to call for endless hearings about every decision the FCC makes. As if on cue, the Communications and Technology Subcommittee of the House Energy and Commerce Committee scheduled oversight hearings on Net neutrality for Wednesday, Dec. 10.

Michigan Republican Fred Upton, House and Energy chair, told Variety, “Ignoring the term ‘independent agency,’ the president this week wanted the world to know who was boss when it comes to net neutrality. As the FCC moves closer to a vote that could put the government in control of the Internet, it is imperative that Congress hears directly from all five commissioners and leading stakeholders.”

But according to Dana Liebelson at The Huffington Post, Silicon Valley insiders say “Republicans’ bombastic opposition to net neutrality is threatening [their] support, even as it wins the party political favor with the telecom and cable companies bankrolling their campaigns.” She writes:

“Between January 2011 and June 2014, executives, employees, and political action committees affiliated with nine of the companies that oppose net neutrality, including Verizon, AT&T, and Cisco Systems (and excluding those companies’ subsidiaries), gave $762,000 to the National Republican Congressional Committee and $733,915 to the National Republican Senatorial Committee. The same groups gave less than $500,000 each to the equivalent Democratic committees.

“Some of the Republicans who criticized net neutrality most vocally this week have also collected big donations from the telecom industry. House Speaker John Boehner (R-Ohio) received $317,825 from these companies, while incoming Senate Majority Leader Mitch McConnell (R-Ky.) received $159,925. The five members of Congress who received the biggest donations from this group are all Republicans.”

Liebelson also notes that Silicon Valley has “historically leaned towards Democrats. From January 2011 to June 2014, executives, employees, and political action committees affiliated with nine tech companies, including Google, Facebook, and Netflix, gave $481,788 to the Democratic Senatorial Campaign Committee and $366,043 to the Democratic Congressional Campaign Committee. The same group gave less than $324,000 each to the two Republican counterparts. Of the five members of Congress who received the highest contributions from these companies, four are Democrats.”

Over at CNN’s “State of the Union” on Sunday, Minnesota Democratic Sen. Al Franken blasted Texas Republican Ted Cruz’s Twitter characterization of Net neutrality as “Obamacare for the Internet.” Franken said, “He has it completely wrong and he just doesn’t understand what this issue is.”

Asked by CNN’s Candy Crowley whether Net neutrality would stunt “innovation” among ISPs, Franken replied, “That’s baloney. They’ve been doing this all along. They’ve been doing this since the beginning of the Internet. This isn’t going to stop this. All this stop[s] them from doing is making a whole bunch of extra money. But this is not going to stop them from, from wiring the country.”

ISP reaction. Which makes the comments of John Chambers, CEO of Cisco Systems, all the more interesting. He told CNBC last week that reclassifying the Internet under Title II “would be a tremendous mistake for our country.”

Cisco manufactures networking equipment for the ISPs, most of which are in opposition to Net neutrality. “This will cost the country jobs and economic leadership,” Chambers declared, adding that, “Our broadband buildout over the last four to five years has been very good, probably one of the best in the world.”

But as Susan Crawford said on Moyers & Company last year, “It’s fair to say that the US at the best is in the middle of the pack when it comes to both the speed and cost of high speed internet access connections.”

Also at stake: the multibillion dollar merger of Comcast with Time Warner. Last week, there was speculation that Obama’s stand on Net neutrality might be part of a tradeoff for government approval of the deal.

But Steven Davidoff Solomon wrote in The New York Times late last week, “President Obama’s statements only add to the troubles for this deal. Potentially, the F.C.C. could require that the two companies agree to a form of net neutrality as part of the needed regulatory clearance.”

This, Solomon suggested, leads to speculation as to “whether Comcast wants to complete the deal at all in light of the net neutrality issue. If not, can Comcast get out of the transaction if the F.C.C. approves the deal but then separately adopts a net neutrality rule in a way that would hurt cable and other broadband companies?” Watch this space.

As Jamie Surowiecki recently wrote in The New Yorker, “The brute fact is that most mergers don’t work,” and he quoted NYU finance professor Aswath Damodaran: “More value is destroyed by acquisitions than by any other single action taken by companies.” Can you say Time Warner/AOL?

Meanwhile, the National Cable and Telecommunications Association, the lobby group of which current FCC Chair Wheeler is a past president and CEO, has a blog full of reasons why Title II reclassification is a terrible idea, including this chart, designed, presumably, to make your eyes cross at just how difficult the NCTA believes it would be.

So whither Wheeler? The $64,000 question. Late the day after Obama’s official statement, Brian Fung and Nancy Scola at The Washington Post wrote that in a meeting at the FCC, Wheeler “told a group of business executives that he was moving in a different direction a more nuanced solution. That approach would deliver some of what Obama wants but also would address the concerns of the companies that provide Internet access to millions of Americans, such as Comcast, Time Warner Cable and AT&T.

“ ‘What you want is what everyone wants: an open Internet that doesn’t affect your business,” a visibly frustrated Wheeler said at the meeting, according to four people who attended. “What I’ve got to figure out is how to split the baby.’

“The dissonance between Obama and Wheeler has the makings of a major policy fight affecting multibillion-dollar industries.”

But on Wednesday, Dana Liebelson and Ryan Grim at The Huffington Post reported that on the contrary, “multiple sources in the meeting” had told them that Wheeler had said he “was taking the president’s comments under advisement.” One said, on background, “Personally, my sense coming out of the meeting was it was more likely than not that he would wind up doing what the president asked.”

Two days later, Brian Fung at the Post was back, reporting that Obama’s statement “undermined weeks of work by the chairman to develop an alternative policy, which he has said in private meetings could preserve a free and open Web while also addressing concerns by the Internet providers. Wheeler, while publicly saying he has been open to all options including the full use of Title II, still appears to favor the hybrid plan that uses some of the FCC’s Title II authority only in some circumstances, according to the people who have met with him over the past few weeks.”

One of Brian Fung’s sources described a meeting in which Wheeler was “openly hostile to just about every other idea that was mentioned, to the point where he would bite people’s heads off after they opened their mouths.” Another said, simply, “The dude needs a vacation.”

What everyone agrees is that Wheeler wants to take it slow. The FCC has announced, “There will be no vote in the December meeting agenda. That would mean rules will now be finalized in 2015.”

And there is one guarantee: no matter the FCC’s decision, legal action will keep Net neutrality in play and in the news for a long time to come. We’ll keep you informed and on top of actions you can take to let the FCC and Chairman Wheeler know what you think.