The Republican mid-term victories were viewed as a big win for global-warming deniers and their oil-and-coal industry backers, but China’s surprising acceptance of greenhouse gas limits removes one of the chief arguments against the U.S. doing something about the climate crisis, writes ex-CIA analyst Paul R. Pillar.

This week’s announcement of a U.S.-Chinese agreement on curbing greenhouse gases is very important, including in some ways that Michael Levi’s expert analysis effectively captures. As Levi notes, this agreement was a marked departure for China not only in terms of the numerical goals set but also in the manner of setting them, in the form of an agreement negotiated with the United States.

This goes against the prior Chinese habit of treating climate change, like Beijing treats many things, as a subject on which China must firmly assert its independence. 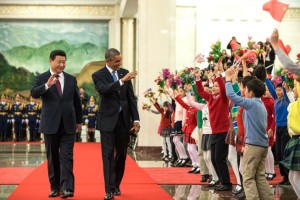 The agreement surprised many from the standpoint not only of Chinese policy-making habits but also of American politics. The dominant story line as President Obama left on his current trip was that, with his party having just gotten whupped in the mid-term election, he would struggle to assert U.S. power and influence. But instead his visit to China has been productive.

Getting Beijing’s signature on the environmental accord has been the biggest achievement, but other deliverables have included a substantial trade agreement and progress toward averting U.S.-Chinese incidents at sea. As Sarah Palin might remark if her political allegiances were different, “How’s that weak-president-shuffling-off-to-Beijing thing workin’ out for ya?”

Much more important than political story lines are the substance, symbolism and momentum contained in the emissions accord itself. The sheer fact of the two biggest emitters of greenhouse gases jointly arriving at such an objective is itself significant. Any direct benefit involved will have a multiplier effect to the degree that it imparts momentum to efforts to negotiate broader multilateral commitments and action.

The effects also will be beneficial insofar as they affect debates in the United States, where pre-Enlightenment opposition to doing something about climate change is still all too deeply entrenched. The accord with China will at least help to refute the argument that it wouldn’t make sense for the United States to get out in front on this issue when other emitters, and China is the biggest emitter of all, are not doing their part.

Failed Hewlett-Packard executive and unsuccessful senatorial candidate Carly Fiorina made exactly this argument the other day in a pro-pollution op-ed in which she blithely observed that “no form of energy is perfect” and that “action by a single state or nation will make little difference.”

The domestic political task of getting the United States to live up to negotiated goals and to doing its necessary share will still be formidable. The election result earlier this month made it even more formidable. Probably the person who personifies this unfortunate fact the most is Sen. James Inhofe, R- Oklahoma, who has declared that “manmade global warming is the greatest hoax ever perpetrated on the American people.” In a fox-overseeing-the-henhouse situation, Inhofe will take over as chairman of the Senate Environment and Public Works Committee.

Maybe, just maybe, the accord announced in Beijing will nudge the deniers and other opponents of action at least slightly away from their Dark Ages attitude toward science, from their narrow focus on denying not just scientifically derived knowledge but also anything that smells like an accomplishment for Barack Obama, and from a short-sighted focus on quarterly results of the coal industry on Kentucky or the oil industry in Oklahoma, and lead them to give some thought to doing the responsible thing to preserve a habitable environment.

Another of the standard knocks on President Obama is that he plays only small ball and hits only singles, and that he doesn’t think strategically enough and go for home runs. There is nothing more strategic and big-picture than saving the planet. The agreement announced in Beijing cannot count for a home run because it is only the setting, and not yet the achieving, of a goal. But it is an important step toward getting around the bases.

← When Henry Kissinger Makes Sense
Can the World Avert a New Cold War? →