The battle to protect “Net Neutrality” got a boost from President Obama’s strong recommendation to the FCC in favor of reclassifying the Internet as a public utility, but the newly empowered Republicans are demanding that private industry have more control, writes Michael Winship.

On Monday, the White House released a statement from President Barack Obama in support of Net neutrality, his strongest and most direct since the 2008 election campaign.

“An open Internet is essential to the American economy, and increasingly to our very way of life,” he began. “By lowering the cost of launching a new idea, igniting new political movements, and bringing communities closer together, it has been one of the most significant democratizing influences the world has ever known. 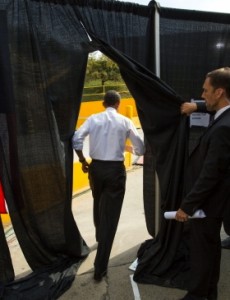 “Net neutrality has been built into the fabric of the Internet since its creation, but it is also a principle that we cannot take for granted. We cannot allow Internet service providers (ISPs) to restrict the best access or to pick winners and losers in the online marketplace for services and ideas. That is why today, I am asking the Federal Communications Commission (FCC) to answer the call of almost 4 million public comments, and implement the strongest possible rules to protect net neutrality.”

Most important, unlike previous remarks, the President came down directly in favor of reclassifying the Internet as a public utility a common carrier, like telephone service: “I believe the FCC should reclassify consumer broadband service under Title II of the Telecommunications Act while at the same time forbearing from rate regulation and other provisions less relevant to broadband services.”

In other words, as Jacob Kastrenakes writes in The Verge, “This means that Internet providers would just be pumping Internet back and forth through pipes and not actually making any decisions about where the Internet goes providers would be stuck allowing consumers to use the Internet as they want to, using whatever services they like without any penalty. If that sounds pretty great, it’s because that’s basically how the Internet has worked up until now.”

While Federal Communications Commission Chair Tom Wheeler has said on various occasions that reclassification was not out of the question, past attempts to preserve Net neutrality without it have been thrown out of court and new proposed rulemaking still has focused on non-reclassification alternatives that could allow providers to provide fast lanes of access for customers with deeper pockets.

A so-called “hybrid” proposal was floated in The Wall Street Journal last month: “The plan now under consideration would separate broadband into two distinct services: a retail one, in which consumers would pay broadband providers for Internet access; and a back-end one, in which broadband providers serve as the conduit for websites to distribute content. The FCC would then classify the back-end service as a common carrier, giving the agency the ability to police any deals between content companies and broadband providers.”

Reaction? As The Washington Post headlined, “The FCC offers a middle-ground take on net neutrality. And everyone hates it.” Scott Harris, “a telecom lawyer and former FCC official,” told the Post, “I didn’t think it was possible to find a solution that would both accomplish nothing useful and outage everyone. Yet they seem to have hit the sweet spot.”

As the President noted, “The FCC is an independent agency, and ultimately this decision is theirs alone,” but the force of his statement Monday could make a difference and response from the media reform movement has been overwhelmingly positive.

“Thank you, Mr. President,” former FCC Commissioner Michael Copps, now a special advisor to Common Cause’s Media and Democracy Reform Initiative, said. “As someone who has been pushing for Title II since 2002, when the FCC wrongly classified broadband, I am thrilled. Now the FCC must show the same kind of leadership and courage.”

Rashad Robinson, executive director of ColorOfChange, said his organization “applauds President Obama’s strong statement in favor of Title II classification of the Internet Enough with cloak and dagger rules that no one can seem to effectively explain, and the favoring of corporations and their bottom line over the consumers that the FCC is charged with protecting.”

And Anna Galland, executive director of MoveOn.org Civic Action, declared, “Americans from all walks of life, from everyday Internet users, to mom and pop business owners, to artists and major tech industry leaders — stand with President  Obama in support of treating the Internet as a public utility and preserving its equal use for future generations.”

One dissenting voice: Matt Kibbe, president of the right-wing group FreedomWorks, said in a statement, “Keeping the Internet ‘free and open’ through federal oversight is an oxymoron that only government logic can create. We have seen the messes created by federal bureaucrats trying to micromanage industries they know nothing about. Net neutrality enforced by a bunch of suits in Washington, DC would be as successful as the HealthCare.gov website, a disaster from day one.”

And there are rumors that an agreement on reclassifying the Internet as a common carrier may be part of a horse trade in exchange for FCC approval of the proposed $45 billion Time Warner-Comcast merger. Would a new multimedia monolith controlling more than a third of Americans’ access to the Web obey the Net neutrality rules?

In response to President Obama’s remarks, FCC Chair Wheeler said, “The reclassification and hybrid approaches before us raise substantive legal questions We must take the time to get the job done correctly, once and for all, in order to successfully protect consumers and innovators online.”

The FCC may take action on Net neutrality by the end of the year but unconfirmed reports indicate that a decision will be delayed until 2015, when the new GOP-dominated House and Senate take office. Many feel the new Congress won’t affect the commission’s final decision but there are ways the House and Senate have to make a government agency’s life uncomfortable like unending hearings and budget cuts, to name two.

Republican Texas Sen. Ted Cruz already has bumper stickered the issue. After the President’s statement on Monday, he tweeted, “Net Neutrality is Obamacare for the Internet.”

← Standing in an Adversary’s Shoes
Obama Slammed for Iran Outreach →