Exclusive: For six years, President Obama has bent to the will of Official Washington by reneging on promises to the American people for “transparency” and operating instead as an out-of-touch “insider.” Now, the Democratic election debacle offers him a last chance to remember why he was elected, writes Robert Parry.

Most notably, President Barack Obama and the Democrats shelved all the “contentious” issues that might have rallied their “base” to turn out and vote. Immigration reform was put on hold; release of the Senate report on “torture” was postponed; what to do about “global warming” was ignored; the argument about the value of activist government was silenced; etc., etc., etc. 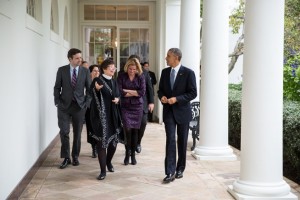 On a personal level, supposedly polarizing “liberal” candidates, such as actor Ashley Judd in Kentucky, were pushed aside in favor of supposedly more “electable” candidates, like Alison Lundergan Grimes. Unwilling to say whether she had voted for President Obama in 2012, Grimes managed to win only 41 percent of the vote against the perennially unpopular Republican Sen. Mitch McConnell.

Obama himself was virtually sidelined from many races in what was an implicit Democratic admission of the Republican theme that Obama was a failure and that he deserved an electoral repudiation. The smell of fear pervaded the Democratic ranks and panic is not the most inspiring of emotions.

In some states, the Democrats seemed enamored with what might be called the “nepotism strategy,” counting on the “magic” of political names and family connections to somehow overcome their lack of message and their image of timidity: Pryor in Arkansas, Grimes in Kentucky, Nunn in Georgia all went down to decisive defeat.

In the bigger picture, the Democratic failure seems part and parcel with the broader weakness of progressivism in the United States. The Right continues to dominate in areas of media and messaging, investing billions upon billions of dollars in a vertically integrated media apparatus, from the older technologies of print, radio and TV to the newer ones around the Internet. The Right also has layers upon layers of think tanks and other propaganda outlets.

By comparison, the Left has never made anything close to a comparable investment. And, even the ostensibly “liberal” network MSNBC and the purportedly “liberal” New York Times fall into line behind neoconservative foreign policy initiatives at nearly every turn, such as the “regime change” campaigns in Syria, Iran and Ukraine. So, too, do many of the supposedly “liberal” think tanks, such as the Brookings Institution and the New America Foundation.

Though President Obama may be something of a “closet realist” hoping to work quietly with foreign adversaries to resolve international crises he has never taken firm control over his own foreign policy.

Obama apparently thought that neocon holdovers from the Bush years, like Gen. David Petraeus or Assistant Secretary of State for European Affairs Victoria Nuland, and Democratic neocons, such as his first Secretary of State Hillary Clinton, would somehow drop their ideological certitudes and cooperate with his approach.

Instead, the neocons and their “liberal interventionist” allies burrowed deep into the foreign policy bureaucracy and pop up periodically to press for their war-mongering agendas. A distracted President Obama always seems outmaneuvered from the 2009 Afghan “surge,” to the 2010 stand-off over Iran’s nuclear program, to the 2011 civil wars in Libya and Syria, to the 2014 Ukrainian coup d’etat.

Arriving late at each new crisis, Obama usually signs off on what the neocons want, although he intermittently pushes for his “realist” approach, such as collaborating with Russia’s President Vladimir Putin in avoiding a U.S. war on Syria in 2013 and negotiating a peaceful settlement to Iran’s nuclear program, which could be completed in 2014 if Obama doesn’t lose his nerve.

The big question now is whether the Democrats’ humiliating defeat on Nov. 4 will teach Obama and the party any meaningful lessons or will the Democrats just kid themselves into thinking that “demographics” will save them or that they will prevail in 2016 by avoiding controversial stands and putting up another famous “name,” in Hillary Clinton.

Will Obama finally realize that he has to revert back to his inspiring messages of 2008 on issues such as his promise of government transparency? For the past six years, transparency has worked only one way: the government gets to look into the secrets of citizens while the citizens have no right to know about the government’s secrets.

What I’m hearing from many young progressives is that they are so resentful of government intrusions into their lives that they are veering more toward libertarianism, even though it offers no solutions to most environmental, economic and social problems. If Obama hopes to stanch this flow of progressive youth to the right, he needs to finally recognize that the people need transparency on the government and the government must learn to trust the people.

An obvious first step would be to override CIA objections and release the report on torture during the Bush years. And while Obama is at it, he should make public the secret pages from the 9/11 report relating to Saudi funding for al-Qaeda terrorists.

I’m also told that Obama has information that contradicts his administration’s early claims blaming the Aug. 21, 2013 sarin gas attack on the Syrian government and faulting Russia for the July 17, 2014 shoot-down of Malaysia Airlines Flight 17 over Ukraine. Those two incidents fueled dangerous international confrontations with the United States nearly going to war against the Syrian government in 2013 and starting a new Cold War with Russia in 2014.

If Obama has U.S. intelligence information that points the finger of blame in different directions, he should correct the impressions left by Secretary of State John Kerry and other U.S. officials. The neocons won’t like that and some “liberal interventionists” may have egg on their faces, too but misleading propaganda has no place in a democracy. False information must be removed as quickly as possible.

Similarly, Obama should commit his administration to expediting release of historical secrets. Currently, it takes many years, even decades, to pry loose embarrassing “secrets” from the U.S. government, often allowing false historical narratives to take hold or creating a hot house for conspiracy theories. It’s way past time for the U.S. government to give the American people their history back.

By releasing as much information as possible about important topics, Obama could finally begin to win back the people’s trust, not just in him but in the government. Nothing is as corrosive to democratic governance as a belief by the people that the government doesn’t trust them and that they, in turn, have no reason to trust the government.