It is an article of faith on the American Right that government is bad or at least inept and business is good and efficient. But the reality is often quite different especially in areas where safety should be paramount and the public interest is at stake, such as space travel, as ex-CIA analyst Paul R. Pillar notes.

Private enterprise that is engaged in transportation to space and the upper atmosphere had two catastrophic failures within the last week: the explosion seconds after liftoff of an Antares rocket launched by Orbital Sciences Corporation under a NASA contract to ferry supplies to the international space station; and the crash, killing one of the test pilots, of a rocket plane that Virgin Galactic hopes to use to give passengers rides through the mesosphere.

Accidents can happen to anyone, but the incidents point to some issues regarding the relative roles and performance of the public and private sectors and how those roles are commonly viewed. Two issues in particular. 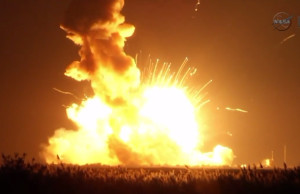 One concerns how a well-founded appreciation for the working of free markets has too often been translated into a crude and unfounded, and ideologically driven, belief that the private sector is inherently better than the public sector over a very wide range of activities.

Genuinely free markets are indeed wonderful mechanisms for using competition and pecuniary incentives to get the best possible product or service at the best possible price. But large parts of the private sector are far from operating as classic free markets. There are numerous possible reasons for this, involving departures from unfettered competition and small numbers of buyers or sellers.

Orbital Sciences contracting with NASA is not like General Motors trying to sell cars, in which success of the business depends on large numbers of potential customers deciding for themselves what they like or don’t like about the products offered by GM and its competitors. Instead there is only one customer, NASA, that presumably is applying the same standard that it always applied under its previous model of managing space launch projects itself and using private industry only as suppliers for segments of the project.

There is no more incentive to get things right, and to avoid incidents like last week’s launch failure, whether the work is contracted out or not. Of course, Orbital Sciences would not want a string of failures that would lead NASA to redirect its business to SpaceX or someone else, but NASA would not want that either.

It is hard to see where private enterprise is offering any cost savings with an arrangement like this. For government to contract with a for-profit business means starting with the need to make up for additional overhead, including the business’s profit. It also is hard to see where any extra innovation is being offered. Indeed, pecuniary motives may have been working against innovation.

The main engine that Orbital Sciences was using in the booster that exploded is a modified version of a Russian engine that dates from the 1970s. An independent consultant remarked about the incident with the Antares, “Coming up with new engines is a very expensive proposition. That was probably one of the reasons the Russian engine was so attractive.”

The other issue concerns the standards that the public and the political class commonly apply to success and failure in the public and private sectors. Frequent failure and creative destruction, of failed products and sometimes of whole companies, are central to the working of free markets. It is thus appropriate that as long as no one else is getting hurt, we are nonchalant about such failures. (The awful situation of financial institutions that are “too big to fail” should be an exception precisely because a lot of other innocent people do get hurt by failure.)

But a far more rigorous standard often gets applied to activities by government, even activities that are at least as inherently risky and subject to failure as what those in the private sector who introduced the Edsel or New Coke were doing. The zero-tolerance standard applied to stopping terrorist attacks is one example. NASA’s exploration of space has been another, especially where human lives were involved.

We are taking more notice of failures by private sector space enterprises than we otherwise would because private enterprise is getting into an activity that government had previously performed and to which the higher standards of success and failure had historically been applied.

The nature of a project and its relationship to any public purpose ought to be prime criteria in success and failure and who ought to do the project. Virgin Galactic’s project is designed to provide brief thrill rides to people wealthy enough to want to spend a quarter of a million dollars per ticket for that sort of thrill. Obviously there is no role for government in anything like that.

One can even question why the National Transportation Safety Board is using its resources to investigate last week’s crash. Let the market handle it all. If would-be thrill riders have enough concern about safety to turn their backs on Virgin Galactic’s project, or even on the entire space tourism business, so be it; there would be no harm to the public interest.

As for the many other endeavors, including some bold, risky endeavors, where the public interest is involved, let us remember that some of those are suitable for markets to play a role but others are not.