From Editor Robert Parry: In December 1996, I participated in a remarkable joint appearance with journalist Gary Webb to discuss the Contra-cocaine scandal at the Midnight Special bookstore in Santa Monica, California.

I spoke about how my Associated Press colleague Brian Barger and I broke the first story on the Contras’ involvement in cocaine trafficking in 1985, and then Webb described how, in 1996, he exposed the Contra-cocaine’s impact on the crack epidemic that ravaged U.S. cities in the 1980s.

Our two speeches were later broadcast by FAIR’s “Counterspin” in a two-part special, but those programs have largely been lost to history. Yet, we have now recovered the audio and have copied it onto CDs and into MP3 files. 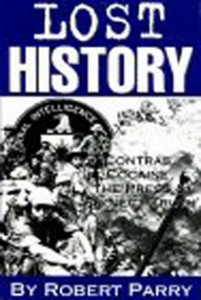 With the upcoming release of the movie “Kill the Messenger” recounting how the CIA and major U.S. newspapers collaborated in “discrediting” the story and ultimately driving Webb to suicide, we are offering the audio of these historic speeches as part of our fall fundraiser to keep Consortiumnews.com afloat.

For a donation of $100 or more, you can get the CD and an autographed copy of my book, Lost History: Contras, Cocaine, the Press and Project Truth, which describes how the CIA’s inspector general finally acknowledged that the CIA did know about the Contra-cocaine smuggling and helped cover it up.

For a $50 donation, we can e-mail you the two MP3 files containing the two speeches.

You can use a credit card online (we accept Visa, Mastercard or Discover) or you can mail a check to Consortium for Independent Journalism (CIJ); 2200 Wilson Blvd., Suite 102-231;
Arlington VA 22201. For readers wanting to use PayPal, you can address contributions to our account, which is named after our e-mail address: “consortnew @ aol.com”. (Since we are a 501-c-3 non-profit, donations by American taxpayers may be tax-deductible.)

After making your donation, simply send a follow-up e-mail to consortnew@aol.com telling us the mailing address where you want your CD-and-book sent or the e-mail address where we should send the MP3 files.