Exclusive: The longer President Obama has been in office the less honest he has become, a problem growing more apparent in his second term as he reads speeches containing information that he knows to be false or at least highly misleading, Robert Parry recounts.

During President Barack Obama’s first term, he generally was careful in making comments about world affairs not that he was always completely honest but he was circumspect about outright lying. Over the past two years, however, he appears to have lost any such inhibitions.

That’s the case even when he is engaged in something as serious as addressing the United Nations General Assembly on issues of war or peace as occurred both last year and this year. In September 2013, Obama made what he knew was a deceptive comment about the mysterious Sarin gas attack in Syria a month earlier. He did something similar on Wednesday in describing the Ukraine crisis. 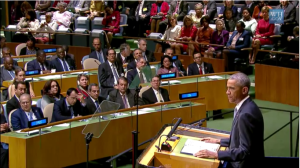 Regarding the Sarin case, Obama knew before his 2013 speech that many of his own intelligence analysts believed Syrian rebels were behind the Aug. 21 attack that killed several hundred people outside Damascus. These analysts suspected the incident was part of a scheme to blame the government of President Bashar al-Assad and get the U.S. military to attack Assad’s forces. [See Consortiumnews.com’s “Fixing Intel Around Syria Policy” and “Was Turkey Behind Syria-Sarin Attack?’]

Despite this knowledge, Obama delivered a formal address to the UN General Assembly on Sept. 24, 2013, declaring: “It’s an insult to human reason and to the legitimacy of this institution to suggest that anyone other than the regime carried out this attack.”

Similarly, Obama knew the complex reality in Ukraine when he took to the podium on Wednesday. He knew that the crisis was instigated not by Russia but by the European Union and the United States. He knew that the elected President Viktor Yanukovych had been targeted for “regime change” by officials within the U.S. State Department, led by neoconservative Assistant Secretary of State for European Affairs Victoria Nuland, who literally hand-picked the new leadership with the aid of U.S. Ambassador Geoffrey Pyatt who described the need to “midwife this thing.”

Obama knew that Nuland had told Ukrainian business leaders that the U.S. government had invested $5 billion in support of their “European aspirations” and that the U.S.-funded National Endowment for Democracy had subsidized scores of “non-governmental organizations” to help destabilize the Yanukovych government. He also knew the key role played by Ukraine’s neo-Nazi militias in seizing presidential buildings on Feb. 22 and forcing Yanukovych’s officials to flee for their lives.

Obama was aware, too, that the ethnic Russians of eastern Ukraine had rejected this coup regime and rose up in resistance to the imposition of what many saw as illegitimate authority. He knew that the people of Crimea faced with this coup regime in Kiev voted overwhelmingly in a referendum to secede from Ukraine and rejoin Russia, a move the Russian government supported and accepted.

Obama knew that the Kiev regime brutalized southern and eastern Ukraine, with the regime’s activists burning alive dozens of ethnic Russian protesters in Odessa and its military killing thousands with heavy weaponry fired into towns and cities of eastern Ukraine. The coup regime in Kiev even dispatched Nazi militias, such as the Azov battalion, to engage in bloody street fighting the first time since World War II that any government had deployed armed Nazi forces to attack a European population. Obama knew that, too. [See Consortiumnews.com’s “Ukraine’s ‘Romantic’ Nazi Storm Troopers.”]

Obama also knew that some of his own intelligence analysts had concluded that extremist elements within the Ukrainian government were probably responsible for the shoot-down of Malaysia Airlines Flight 17 on July 17, possibly using anti-aircraft missiles deployed close to rebel-controlled territory and aided by one or more Ukrainian fighter planes in the air. Obama knew, too, that the Ukrainian military attacked the crash site, driving investigators away and apparently setting fire to a wheat field containing remnants of the plane. [See Consortiumnews.com’s “Flight 17 Shoot-down Scenario Shifts.”]

Yet, this is how Obama presented the Ukrainian crisis to the world: “Recently, Russia’s actions in Ukraine challenge this post-[World War II] order. Here are the facts. After the people of Ukraine mobilized popular protests and calls for reform, their corrupt president fled. Against the will of the government in Kyiv, Crimea was annexed. Russia poured arms into eastern Ukraine, fueling violent separatists and a conflict that has killed thousands.

“When a civilian airliner was shot down from areas that these proxies controlled, they refused to allow access to the crash for days. When Ukraine started to reassert control over its territory, Russia gave up the pretense of merely supporting the separatists, and moved troops across the border.

“This is a vision of the world in which might makes right — a world in which one nation’s borders can be redrawn by another, and civilized people are not allowed to recover the remains of their loved ones because of the truth that might be revealed.

“America stands for something different. We believe that right makes might — that bigger nations should not be able to bully smaller ones, and that people should be able to choose their own future. And these are simple truths, but they must be defended. America and our allies will support the people of Ukraine as they develop their democracy and economy.

“We will reinforce our NATO Allies and uphold our commitment to collective self-defense. We will impose a cost on Russia for aggression, and we will counter falsehoods with the truth. And we call upon others to join us on the right side of history for while small gains can be won at the barrel of a gun, they will ultimately be turned back if enough voices support the freedom of nations and peoples to make their own decisions.”

An honest person would have described all these events very differently, including what “America stands for.” There could have been at least some acknowledgement of how the United States in the post-World War II era has often relied on “the barrel of a gun” or cruise missiles and smart bombs to impose its will on other countries, including “regime change” in Iraq in 2003 and in Libya in 2011.

Obama could have acknowledged, too, that the United States has often used coups d’etat to unseat governments not to its liking, even when the leaders have been popularly elected. A partial list would include Mossadegh in Iran in 1953, Arbenz in Guatemala in 1954, Allende in Chile in 1973, Aristide in Haiti twice, Chavez in Venezuela briefly in 2002, Zelaya in Honduras in 2009, Morsi in Egypt in 2013, and now Yanukovych in Ukraine in 2014.

But instead Obama chose to present a simplistic, propagandistic version of what has transpired in Ukraine. Essentially he’s saying: It’s all Russia’s fault and everyone on the U.S. side is a good guy, on “the right side of history.”

It is interesting, however, that Obama did not come out directly and implicate Russia and the eastern Ukrainian rebels in the shooting down of Malaysia Airlines Flight 17. Given his access to detailed U.S. intelligence on the topic, he should have been able to point the finger directly, if indeed that’s what the facts showed. Instead, he played word games to create the impression that the rebels and Russia were to blame without actually spelling out any evidence against them.

This was similar to how President George W. Bush gave speeches in 2002 and 2003 juxtaposing the names Saddam Hussein and Osama bin Laden to create the perception among Americans that the two were joined at the hip when they were, in fact, bitter enemies. Now, President Obama has come to replicate these Bush-like deceptions.

There is also new evidence of how the supposedly “popular” government in Kiev has been developing its democracy — by incarcerating people who dare to protest against its policies. As the New York Times’ Andrew E. Kramer reported on Thursday, the Kiev regime has been padding its prisoner exchanges by throwing in political dissidents arrested far from any battlefield.

Kramer wrote: “The Ukrainians, widely understood to be lacking enough prisoners of their own to effect a one-for-one exchange, set free a motley group of men, women and teenagers wearing tracksuits or dirty jeans, and taken, they said, from jails as far away as Kiev.

“Soon enough, many of them were objecting to anybody who would listen there on the highway that they had never fought for pro-Russian separatists, and in fact had no idea how they ended up in a prisoner exchange in eastern Ukraine.
“In interviews at their point of release and in a dormitory where former detainees are housed in Donetsk, a dozen men freed in exchanges over the weekend by the Ukrainian Army gave similar accounts. Some said they were arrested months ago in other parts of Ukraine for pro-Russian political actions, such as joining protests calling for autonomy in eastern Ukraine or for distributing leaflets.”
In other words, the Kiev regime does not only send Nazi storm troopers to attack people in eastern Ukraine but it jails citizens elsewhere who pass out leaflets.
Recognizing some of these darker truths rather than simply reciting a litany of shiny propaganda could have given President Obama’s UN address more credibility. Perhaps the old Obama would have made a stab at greater intellectual honesty but the new one has taken on the personality of his predecessor, who famously didn’t do nuance.
Investigative reporter Robert Parry broke many of the Iran-Contra stories for The Associated Press and Newsweek in the 1980s. You can buy his new book, America’s Stolen Narrative, either in print here or as an e-book (from Amazon and barnesandnoble.com). For a limited time, you also can order Robert Parry’s trilogy on the Bush Family and its connections to various right-wing operatives for only $34. The trilogy includes America’s Stolen Narrative. For details on this offer, click here.
Post Views: 195