As President Obama launched the first waves of U.S. airstrikes against Islamic State and other targets in Syria, the risks of further military escalation or other expected developments abound, as ex-CIA analyst Paul R. Pillar explains.

The wisdom of any application of military force will involve much more than the goals initially laid out and the resources initially applied to achieve those goals. Those initial conditions are only a snapshot in time of what is inevitably a dynamic process.

History has repeatedly shown that overseas military endeavors have a way of becoming something much different from what they began as. History also has repeatedly shown that the dominant type of change is escalation to something bigger and costlier than originally intended, sometimes even to the point of expanding to blunders of tragic proportions. 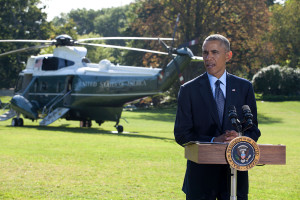 President Barack Obama delivers a statement on confronting the terrorist group ISIL in Syria, on the South Lawn of the White House prior to departure for New York, N.Y., Sept. 23, 2014. (Official White House Photo by David Lienemann)

Several processes, working together or independently, drive the process of escalation. Some of these processes are, considered in isolation, logical and reasonable. Some of them are rooted in universal human nature; some are more characteristically American.

The “Win the War” Objective. A distinctively American (and non-Clausewitzian) way of approaching the use of military force is to believe that if something is worth fighting for, then we ought to realize that we are “at war” and ought to do whatever it takes to “win” the war. This mindset has had a huge influence through the years on discourse in the United States about using the military instrument in foreign affairs, including in more recent years with a so-called “war on terror.”

The attitude severs the use of force from all other calculations about the costs and benefits of using it in particular ways and particular circumstances. There thus is no limit to potential escalation as the sometimes elusive “win” is pursued.

Standard Procedures and the Military’s Operational Requirements. Military forces, for quite understandable reasons of operational security or effectiveness, insist that if they are called on to perform certain missions then they must be permitted to use certain minimal levels of forces, to put their troops in certain places, or to operate in certain other ways regardless of the political or diplomatic side-effects.

Some of the classic and most consequential examples occurred at the onset of World War I, when mobilization schedules of armies helped to push statesmen into a much bigger armed confrontation than they wanted, and when German troops violated Belgian neutrality because that’s what a military plan called for. More recent U.S. military history has had many more modest examples of military requirements driving escalation, such as ground forces being needed to provide security for air bases. In the interest of force security, a remarkably large amount of firepower has sometimes been used in support of quite small objectives (such as the deposition and capture of Manuel Noriega in Panama in 1989).

Hoping That Just a Little More Will Do It. If a given level of force does not accomplish the declared objective, then an understandable and quite reasonable next question is whether a bit more force will be sufficient to do the trick. It may be logically sound to decide that it is worth trying some more force. The calculation of the moment weighs the marginal costs of doing so against the marginal benefits.

The marginal cost of a slight escalation may be low, with the benefit being the chance of a significant breakthrough. But a series of individual decisions like this, while they may be individually justifiable, can result in escalation to total costs that are far out of proportion to any possible benefit. The U.S. escalation of the Vietnam War from 1965 to 1968 is an example.

One Objective Leads to Another. The nature of some objectives is such that if they are to be achieved, or as a consequence of being achieved, some other objective needs to be pursued as well. Or even if it does not really need to be pursued, it comes into play naturally and is not easily dismissed amid the momentum and fog of war. This is the process that often is given the name mission creep. An example is how Operation Enduring Freedom in Afghanistan, which began as an offensive to oust the Taliban, became a long-term nation-building effort.

Responding to the Adversary’s Escalation. It takes two to tango and to make war. The adversary has many of these same reasons to escalate a conflict against us, and perhaps other reasons as well. When he does, we are apt to counter-escalate, not only for emotional reasons of revenge but also perhaps for more justifiable reasons of deterrence. This is the chief type of escalation that was the subject of much strategic doctrine developed during the Cold War.

Domestic Political Vulnerability. Statesmen do not make their decisions about military force in a political vacuum. They have domestic political flanks to protect. Mitigating charges of weakness or wimpiness is an added, and possibly even the principal, motivation to escalate the use of force against what is widely perceived as a threat.

The emerging military campaign against ISIS will not become another World War I or Vietnam War, but all of the above factors are seeds of escalation of that campaign, possibly to levels well above what either the Obama administration or its more hawkish critics are talking about. Some of the factors are already quite evidently in play.

The absolutist vocabulary about being at war and having to win the war is very prevalent. The President already has been pushed by the political and rhetorical forces this vocabulary represents toward greater use of military force than he otherwise would have preferred. The dynamic of each side in the armed conflict escalating in response to the other side’s escalation also has already begun.

A major stimulant for the American public’s alarmist and militant attitude toward ISIS was the group’s intentionally provocative videotaped killings, which the group described as retaliation for U.S. military strikes against it.

The military’s operational requirements are also starting to come into play as a mechanism of escalation, as we hear military experts telling us how air and ground operations really are inseparable, and how effective air strikes depend on reliable spotters on the ground. There also will no doubt be decision points ahead about whether a little more use of force will do the job, as the United States pursues the impossible to accomplish declared objective of “destroying” ISIS.

Finally, the potential for mission creep is substantial, with unanswered questions about what will follow in the countries in conflict even if ISIS could be “destroyed.” Perhaps the most glaring such question is in Syria, where, given the anathema toward dealing with the Assad regime, it remains unclear what would fill any vacuum left by a destroyed ISIS, and what the United States can, should, or will do about it. The much-discussed “moderate” forces are far from constituting a credible answer to that question

There is significant danger of the campaign against ISIS and the costs it incurs getting far, far out of proportion to any threat the group poses to U.S. interests.

5 comments for “Obama’s Risks of Escalation”