The political imperative to “do something” against the brutal Islamic State has brought President Obama and congressional majorities together on a plan for a limited U.S. military response, but this strategy could actually make matters worse, says the Independent Institute’s Ivan Eland.

Although President Obama insists that no American military “boots on the ground” will be used to degrade and defeat the radical Islamist group Islamic State (IS), which is well funded and has captured much heavy military equipment from the Syrian military and U.S. trained and equipped Iraqi army and Kurdish peshmerga militias, that will make his objective much harder to obtain.

My recent book, The Failure of Counterinsurgency: Why Hearts and Minds Are Seldom Won, which summarizes the lessons learned from many historical wars against irregular armies such as IS, concludes that is almost impossible to win against guerrillas by only attacking from the air. 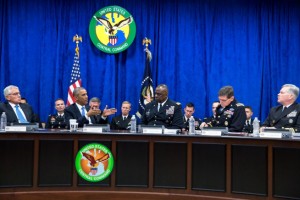 Some damage can be done to armored vehicles, fixed targets such as supply depots, etc. if the guerrillas have any (IS does). Eventually, however, insurgents will blend back into the general population, and airstrikes will simply generate more fighters as a result of the outrage caused by the spike in civilian casualties.

So if boots on the ground are needed to effectively fight IS and Obama and the American people, as a result of the Afghanistan and Iraq debacles, vehemently veto that idea, what is to be done? Surprisingly, the best option is for the U.S. government to do nothing.

IS is a threat to Iraq, Syria, and neighboring countries, but not a direct threat to the United States. But John McCain, his equally belligerent sidekick Lindsey Graham, and other hawks will scream about how naive is the belief that IS will not eventually get around to attacking the United States.

Yet, unlike al-Qaeda, the group’s main purpose is not to attack the United States. Its primary objective is to do what it has already done, construct an Islamic State in the Sunni parts of Iraq and Syria, where it wins the support of many Sunnis as a result of oppressive Shi’ite governments.

So it is not obvious that IS would focus its attacks on the United States in the future, if the United States discontinues airstrikes. Besides, many of the easy IS targets have been hit, at least in Iraq, and such attacks may quickly become counterproductive as civilian casualties mount.

In fighting an insurgency, the main objective should be, and which most traditional military organization have trouble getting their arms around, is to win the “hearts and minds” of the local population, not kill them. Mao Zedong, one of the most effective guerrilla fighters in world history, noted that winning the support of the population is key to winning this kind of irregular warfare because the population is the sea that the guerrillas swim in.

Unlike regular warfare, in which both sides wear distinctive uniforms, guerrillas without uniforms attack and then just blend back into the local populace from which they receive sanctuary, supplies and fighters. Despite Mao’s later ruthlessness upon taking power, when fighting guerrilla-style to gain power, he cautioned his fighters to treat the people with respect and fairness.

When going into Afghanistan and Iraq, the U.S. military initially failed to learn the lessons of Vietnam War and made many of the same mistakes all over again. Instead of trying to win hearts and minds using a less violent counterinsurgency strategy, it once again wailed away with excessive firepower, thus killing or alienating too many civilians.

However, that said, fighting guerrillas is difficult, because a foreign occupier never gets the benefit of the doubt when fighting locals, even brutal locals like the Afghan Taliban or IS. Also, foreign occupiers don’t know the culture as well as locals and therefore have much less intelligence about who supports the guerrillas and who doesn’t. Thus, for great powers, if they are using their own forces to fight guerrillas, they are much more likely to lose.

Thus, boots on the ground in the fight against insurgents should be local ones anyway. That said, the Iraqi army and Kurdish pesh merga militias have not done too well so far against the battle-hardened and well-equipped IS. Fortunately, neighboring Shi’ite Iran, Turkey, Jordan, Saudi Arabia and the other conservative Gulf Sunni monarchies have an incentive to train and equip Shi’ite militias (Iran), the Iraqi army, or the Kurdish militias.

Only if such terrorist training camps are discovered should the U.S. launch low-key, but congressionally approved, drone attacks to wipe them out; such fixed infrastructure can be targeted effectively by such limited airstrikes.

If pressure builds for the United States to get more deeply involved in the fight against IS, perhaps Congress could approve private U.S. companies, staffed with ex-U.S. Special Forces, to conduct the training of Kurdish militias, the Iraqi army, or even Shi’ite militias using weapons provided by regional powers.

Avoiding the use of U.S. military personnel for training locals might avoid the danger of later U.S. escalation, as occurred during the Vietnam War. If President Obama says it will take three years to subdue IS, try 10 or 12 or 20 years. If they succeeded at all (which most didn’t), many of the counterinsurgency episodes my book surveyed took that long.

In sum, boots on the ground are needed to effectively fight IS. However, inserting U.S. military personnel for fighting or training locals likely would be counterproductive and would paint a big, red bulls-eye on the United States.

Ivan Eland is Director of the Center on Peace & Liberty at The Independent Institute. Dr. Eland has spent 15 years working for Congress on national security issues, including stints as an investigator for the House Foreign Affairs Committee and Principal Defense Analyst at the Congressional Budget Office. His books include The Empire Has No Clothes: U.S. Foreign Policy Exposed, and Putting “Defense” Back into U.S. Defense Policy

← Cameras to Detect ‘Abnormal’ Behavior
The Self-Interest in Climate ‘Denial’ →

7 comments for “How Obama’s New War Could Backfire”