President Obama’s decision to expand U.S. attacks against ISIS radicals into Syria without that government’s approval is fraught with risks, including that U.S. forces might be sucked into yet another Mideast civil war, but the New York Times seems all right with that, notes Norman Solomon.

The editorial board of the New York Times has an Orwellian knack for war. Sixteen months ago, when President Barack Obama gave oratorical lip service to ending “perpetual war,” the newspaper quickly touted that end as a democratic necessity. But now — in response to Obama’s speech Wednesday night announcing escalation of war without plausible end — the Times editorial voice is with the endless war program.

Under the headline “The End of the Perpetual War,” published on May 23, 2013, the Times was vehement, calling a new Obama speech “the most important statement on counterterrorism policy since the 2001 attacks, a momentous turning point in post-9/11 America.” The editorial added: “For the first time, a president stated clearly and unequivocally that the state of perpetual warfare that began nearly 12 years ago is unsustainable for a democracy and must come to an end in the not-too-distant future.” 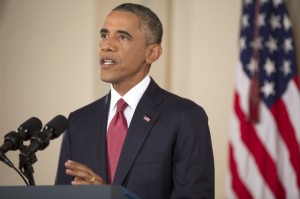 President Barack Obama delivers an address to the nation on the U.S. Counterterrorism strategy to combat ISIL (or ISIS), in the Cross Hall of the White House, Sept. 10, 2014. (Official White House Photo by Pete Souza)

The Times editorial board was sweeping in its conclusion: “Mr. Obama told the world that the United States must return to a state in which counterterrorism is handled, as it always was before 2001, primarily by law enforcement and the intelligence agencies. That shift is essential to preserving the democratic system and rule of law for which the United States is fighting, and for repairing its badly damaged global image.”

But the “essential” shift is now dispensable and forgettable, judging from the New York Times editorial that appeared hours after Obama’s pivotal speech Wednesday night. The newspaper’s editorial board has ditched the concept that the state of perpetual war is unsustainable for democracy.

Under the headline “The Attack on ISIS Expands to Syria,” the Times editorial offers only equivocal misgivings without opposition “as President Obama moves the nation back onto a war footing.” Without a fine point on the matter, we are to understand that war must be perpetuated without any foreseeable end.

The concluding paragraph of the New York Times editorial in the Sept. 11, 2014 edition is already historic and tragic. It sums up a liberal style of murmuring reservations while deferring to the essence of U.S. policies for perpetual war: “The American military’s actions in the Middle East has (sic) often fueled Arab anger, even when the United States was spending billions of dollars on beneficial programs, including health and education. Mr. Obama expressed confidence that the plan against ISIS will work and, at the moment, seems aware of the risks he takes.”

Like the vast bulk of the rest of U.S. mass media, when push comes to militaristic shove, the New York Times refuses to make a break from the madness of perpetual war. In fact, with rare exceptions, the dominant media outlets end up fueling that madness. A strong challenge to it will have to come from elsewhere. From us.

Norman Solomon is executive director of the Institute for Public Accuracy and co-founder of RootsAction.org. His books include War Made Easy: How Presidents and Pundits Keep Spinning Us to Death. Information about the documentary based on the book is at www.WarMadeEasyTheMovie.org.

10 comments for “NYT Reverses on Merits of ‘Perpetual War’”