Israel’s new plan for appropriating nearly 1,000 acres of West Bank land for more Jewish housing underscores the trend toward accelerated ethnic cleansing of Palestinians, a strategy that is stirring revulsion in much of the world and tarnishing the noble principles of Judaism, as Lawrence Davidson observes.

If you are over 50 and were raised in a Jewish household, you either heard the question — “but is it good for the Jews?” — explicitly asked numerous times or were subtly encouraged to think the question to yourself.

It reflects a group-centered concern born of the memory of anti-Semitic hostility and a seemingly unending vulnerability, and it can apply to almost any public action: federal or local legislation, cultural trends, foreign policy decisions, etc. 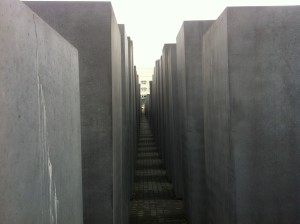 A scene from inside Berlin’s Holocaust memorial. (Photograph by Robert Parry)

I do not know how many of the younger generation of American Jews, known to be very secular and prone to religious intermarriage, still ask this question, but there can be no doubt that it is still there on the tips of almost every Jewish tongue of that generation for whom World War II is still well remembered.

After World War II, most Jews assumed that the Zionist movement and the Israeli state were good for the Jews. Indeed, they assumed that they were necessary goods — necessary for the very survival of the Jewish people. To that end, it was alleged, Israel would provide a haven from the anti-Semitism that so devastated the Jews of Europe.

There were those who took issue with this perspective, but they were few in number and without influence. Zionism triumphed and in 1948 the State of Israel was proclaimed.

Today we have 66 years of history to judge Zionism and Israeli nationalism. So, after these six-and-a=half decades, it is time we ask the question once more. Can we still assume that Zionism and Israel are good for the Jews?

Looking for the Answer

Here are some observations, given by thoughtful and knowledgeable people, both Jews and non-Jews, and some facts easily accessed, that help us answer the question:

–Israeli behavior toward the Palestinians has involved tactics of ethnic cleansing and mass murder, often justified as “self-defense.” In terms of the latest violence in Gaza, the United Nations estimates that at least 73% of the fatalities inflicted by Israel were civilians.

There is good evidence that Israel has been purposely targeting Gaza economic assets so as to impoverish its people. To this end Israel’s Deputy Interior Minister Eli Yishai proclaimed that the “goal of the operation [code-named Protective Edge by the Israeli military] is to send Gaza back to the Middle Ages.”

–How do Israeli Jews feel about this situation? Or perhaps a better way of putting this would be: how have Israeli Jews been culturally programmed to judge such behavior on the part of their government? According to the latest polls up to 97 percent of them support the current operation in Gaza. Do outside opinions matter to them? Not to most. Sixty-three percent assume that “the whole world is against us.”

These numbers suggest that only a very few Israeli Jews understand what is happening to them as they live their lives in a state dedicated to the displacement of another people and the absorption of their land.

–One of those who sees the damage to the Jews is Zeev Sternhell, a well-known scholar and “Israel prize laureate.” He equates present-day Israel to Vichy France — a country “falling into the hands of the right-wing with the support of a vast majority of the population.” This includes the intellectuals, whom he defines as the “professors and the journalists.”

Thus, the attack on Gaza has led to “absolute conformism on the part of Israel’s intellectuals” and the “intellectual bankruptcy of the mass media.” According to Sternhell, “democracy crumbles when the intellectuals, the educated classes, toe the line of the thugs or look at them with a smile.”

–There is also a sense of alarm among some Jews outside of Israel. Henry Siegman is president of the U.S./Middle East Project and former national director of the American Jewish Congress. Referring to the latest Israeli attack on Gaza, Siegman observes that “the slaughter of Palestinian civilians and the Dresden-like reduction to rubble of large parts of Gaza by Israel’s military forces in the name of its own citizens’ security has exposed the hypocrisy that lies at the heart of Israel’s dealings with the Palestinians. Israel’s claim to the right of self-defense in order to prevent its victims’ emergence from under its occupation is the ultimate expression of chutzpa.”

In addition, Siegman notes that “too many Israelis seem to believe – indeed, to take absolutely for granted – that they have the God-given right to occupy, suppress, disenfranchise and displace non-Jews in Israel.”

Siegman is not alone in his condemnation. Recently a number of Holocaust survivors and children of survivors placed a notice in the New York Times. In part it stated: “We are alarmed by the extreme, racist dehumanization of Palestinians in Israeli society. In Israel, politicians and pundits in The Times of Israel and The Jerusalem Post have called openly for genocide of Palestinians and right-wing Israelis are adopting Neo-Nazi insignia.”

–Scott McConnell, the founding editor of the American Conservative is not Jewish, but he too has been observing Israeli behavior and its evolution. Here is how he describes the country’s present state:

“This now is Israel, a country where imposing collective punishment of innocents is the main point, whose elected officials pine openly for concentration camps and genocide. Hyper-nationalistic, loaded with nuclear weapons, deeply racist, persuaded that opposition to it is derived from anti-Semitism, feeling that the Holocaust gives it license to do whatever it wants and that the normal rules of international conduct will never apply to it.”

So, we must ask, just how good is all this for the Jews?

Let’s recall that Israel’s reason for being was to give Jews shelter from the ravages of anti-Semitism. That was certainly Theodor Herzl’s motivation. By any rational standard, Zionist Israel has failed in this regard.

Indeed, with but very few exceptions, it is hard to imagine anywhere less safe for Jews than present-day Israel. And, there is growing evidence that Israeli behavior is a major source of today’s increasing anti-Semitism.

M. J. Rosenberg, a well-known Jewish American commentator, has analyzed this latter issue and noted the difference in levels of publicly expressed anti-Semitic feelings during the leadership of Yitzhak Rabin and Benjamin Netanyahu. His suggestion is that when it appeared, during Rabin’s prime ministership, that Israel wanted a just peace with the Palestinians (whether this appearance was accurate or not), public expressions of anti-Semitism went down. However, when Israel behaves with wanton aggression against Palestinians, as it has in Gaza, instances of anti-Semitism go up.

Since wanton aggression has certainly characterized most of the history of Israeli behavior toward Palestinians, it is fair to say that such actions constitute an important source of growing anti-Semitism.

Most Zionists and Israeli Jews are ideologues. That is, they see the world through the ideology of Zionism and Israeli nationalism, and this narrows their ability to see things, especially their own behavior, in an objective way.

For instance, they insist that their economic impoverishment, ethnic cleansing and periodic slaughter of the Palestinians are carried out in “self-defense.” However, they absolutely refuse to consider that Palestinian violence against Israel is a reaction to Israeli policies and practices, particularly those of occupation, land confiscation and police state rule.

In other words, Zionism and Israeli nationalism have blinded Israeli policymakers and their supporters to the consequences of their actions. That state of mind is not good for anyone, be they individuals or groups.

So we are brought back to our original question — can we assume that Zionism and Israel are good for the Jews? The answer is no, we cannot. Zionism failed the Jews by insisting on an Israel for one group alone. That insistence has inevitably led to racism, discrimination and ethnic cleansing.

These are not practices that have characterized modern Jewry and so it is simply wrong to equate Zionism with Judaism and insist that Israel stands in for the world’s Jews — errors now made by both Zionists and real anti-Semites. The more Jews who understand this, and begin to publicly distance themselves from both Zionism and Israel, the better, for they can safely assume both are bad for the Jews.

16 comments for “Is Israel Bad for the Jews?”