The neocons who plunged the U.S. into the disastrous Iraq War never say they’re sorry. Instead, it’s all about how their idea was great but President Bush bungled the implementation or how the war was “won” but President Obama chose defeat. Still, the real neocon “victory” could be their success in inflicting endless chaos on the Middle East, as JP Sottile observes.

Neocons do like to declare victory, especially regarding the Iraq War. So it came as no surprise that Paul Wolfowitz, apparently unimpressed by Iraq’s mounting crisis, regaled a recent panel discussion at the U.S.-Africa Summit with the blunt proclamation, “We have won it, in  2009.” Unsurprisingly, that’s when Team Bush left the White House — and approximately 150,000 troops behind in Iraq.

Perhaps also not surprisingly, war-weary Americans didn’t pay much attention to Paul’s pronouncement. No doubt they are as tired of Wolfowitz as they are of the war he helped to start. It probably rang as hollow as the faint echo of his earlier pitch for a quick, all-expenses-paid war against 2003’s Hitler of the Moment, Saddam Hussein. 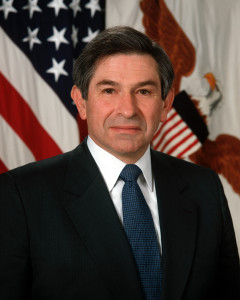 But it’s not quite as simple as that. The issue got more complicated shortly after the Africa summit when President Barack Obama, who had pinned his legacy on extricating the United States from Iraq, suddenly found himself at a podium to announce limited, but open-ended military action to halt the dreaded march of The Islamic State (often called ISIS or ISIL) through the repeatedly rocked Cradle of Civilization.

Many have explained the organization’s plan for creating a fundamentalist caliphate and its reliance on shockingly brutal tactics that make ISIS something that even al-Qaeda could never be, nor perhaps ever wanted to be. Many others have prodded the dying corpse of Iraq to assign blame here, there and everywhere. But the most basic reason for more bombing is found right there in the self-aggrandizing quip by Paul Wolfowitz.

The simple fact is that the Iraq War was a smashing success at least for the neocons because it smashed the keystone in the arch of the region’s stability. By removing Saddam Hussein, his government and the Republican Guard, neocons removed a bulwark against the very jihadism that has policymakers and pundits forever wringing their hands raw, military contractors ringing their cash registers, and the denizens of the national security state resting assured under a blanket of secrecy.

Considering the persistent ubiquity of U.S. forces in the Persian Gulf, their growing presence around the Horn of Africa and extension into Sub-Saharan Africa, Wolfowitz’s declaration of victory may not be ironic or delusional; it may have some measure of truth at least from his perspective but for a reason most would not consider victorious. That “victory” achieved something the neocons could only dream of during a fitful slumber brought on by counting the media’s sheep, i.e. a permanent war in the Middle East.

The Iraq War made it functionally impossible for the United States to ever fully walk away from Iraq, the Persian Gulf or anywhere Muslims and oil mix. And for Wolfowitz, Don Rumsfeld, Dick Cheney and William Kristol, it’s a dream come true. Regime change in Iraq created a power vacuum that was and is too strong to resist.

In fact, that vacuum allowed a wandering Jordanian jihadist named Abu Musab al-Zarqawi and his group of international also-rans to run amok in the chaos of post-Saddam Iraq. After a series of suicide attacks and a pledge to al-Qaeda, the anti-Shi’ite, anti-American, anti-almost-everything group became “al-Qaeda in Iraq,” and, as Bobby Ghosh explains, eventually metastasized into ISIS.

ISIS’s regional road show took off after Zarqawi was killed in June 2006 and a tenuous stability was literally bought by the U.S. during the Sunni Awakening and the much-ballyhooed Surge. The Sunni Awakening was a cash-incentivized purchase of cooperation from just enough angry Iraqis to force interlopers and internecine adversaries to retreat, retool or retire. And that cash made it safe to hang the trappings of democracy over a vacuum that would eventually suck America back in again. And did it ever suck.

Although Team Obama was content to let ISIS grow in war-torn Syria’s radicalized incubator, ISIS’s unimpeded advance onto the doorstep of Erbil, the shining oil metropolis at the heart of the Kurdish semi-state, could not be tolerated.

While Chevron and ExxonMobil evacuated employees, Obama sent in tactical assistance for the Yazidi religious minority trapped on a mountain. While the humanitarian crisis and looming “genocide” came and went quickly, perhaps a little too quickly for credulity’s sake, the all-too predictable chaos unleashed by the legacy of regime change and left behind by a legacy-minded Obama made this latest action almost inevitable.

Alas, the policy of regime change has been replicated, with many thanks to the “stupid stuff” both Obama and Hillary Clinton have done in Libya and Syria. After having wrung the traditional idea of diplomacy out of the State Department i.e. advancing your country’s interests without warfare Hillary has climbed atop a growing stack of her unsold books so everyone can hear some classic Clintonian “triangulation” and pre-election posturing. It’s still early. Maybe she can create distance between herself, her former boss and her rumored, if perpetually disproved, ideals.

Since Obama didn’t go as far as Hillary now says she wanted to go in smashing Syria, it’s even more likely that she played a significant role sucking two more secular regimes down the jihadist rabbit hole, Muammar Gaddafi’s Libya and Bashar al-Assad’s Syria (although “regime change” has come up a little short in Damascus). True enough, some Syrian rebels were only helped covertly through her State Department’s Conflict Bureau (and the CIA) and, although never officially linked to the U.S., through Libyan weapons transferred to the fight against Assad, another Hitler du jour, reportedly via a little-known port at a place called Benghazi.

But now there is little doubt Clinton was present at the creation of yet more reasons for Muslim radicals to organize and arm themselves against U.S. aims, allies and proxies, from drone strikes in Yemen and Pakistan to Muslim persecution after the “foreign policy success” of Myanmar.

However, the Mother of All Sucking Sounds is still the powerful vacuum created by destroying an entire country under false pretenses. That Iraq vacuum sucked trillions of dollars out of the U.S. Treasury, sucked hundreds of thousands of Americans into a vortex of deployments and redeployments, and created the impetus for millions of Muslims around the world to quite rightly think that they were being targeted by America.

As if decades of dances with dictators and America’s oil-slicked machinations weren’t enough evidence, the neocon agenda for Rebuilding America’s Defenses established once and for all through facts on their sandy ground, through pictures from Abu Ghraib and with extrajudicial imprisonment at Gitmo that Muslims make easy targets (in more ways than one).

Perhaps by taking out a contract on Saddam’s uncooperative regime, they were, in effect, taking out a “bridge loan” for their corporate sponsors until another wave of neocon-men and con-women could breathe life into the long-since dead Cold War with their chess moves in Ukraine. But the real action was and is still at the “other” Ground Zero, in Iraq and around the oil-enriched Persian Gulf.

The bait-and-switch of 9/11 for Saddam, of Colin Powell’s show-stopping vial of fake anthrax for actual evidence of chemical weapons, of aluminum tubes as proof for non-existent nuclear centrifuges, it all set a trap that, in the final analysis, America cannot really free itself from, no matter how rabidly Uncle Sam gnaws at the exposed bone of his blood-soaked leg.

And somehow, the planners of the Great Remaking of the Middle East have been surprisingly unbowed in spite of the colossal failures and the supposed “blunder” of a strategy gone wrong. Their lack of penance has made them the butt of jokes, but the joke may be on us.

These were not stupid men. They knew that the only way to keep their version of “the peace” was to keep America trapped in Middle East wars in perpetuity. They planned on it. Sure, Obama’s pull-out provided momentary relief from the trap, but with each passing month the death and destruction and body count mounted in a “free” and “democratic” Iraq until it predictably collapsed upon itself, unable to make whole what American indifference to facts, law and human life tore asunder.

Now that vacuum has sucked in the detritus of the Obama administration’s own failed policy of regime changes. In Syria and in Libya and, somewhere outside the news media’s bubble, in Yemen, a supposedly feckless Obama has played the same damnable game with the targeted “smashing” of drones, airstrikes and anti-terrorism initiatives.

Meanwhile, the result of illegally smashing Iraq still speaks for itself. So maybe, just maybe, Wolfowitz is, technically speaking, correct when he said “we won.” The problem is that the “we” is not America or even most Americans. The “we” is the quirky cabal of desk jockeys, chicken-hawks and Sunday showmen who, through their interconnected web of think tanks and political appointments and corporate connections, ensnared the United States into a conflagration that is beginning its second act.

And if the U.S. somehow avoids getting sucked into a long-term battle against disaffected, dislocated and disenfranchised Muslims? Cold War 2.0 ensures that the perpetual machine designed to continually “rebuild” America’s defenses has a never-ending supply of financial fuel and antagonistic grist for its multi-generational mill.

Either way, the neocon mission has truly been accomplished.

12 comments for “The Neocons’ Grim ‘Victory’ in Iraq”