Official U.S. policy is to decry torture at least when done by adversaries but ambiguities abound when U.S. operatives do the torturing. Then, torture becomes debatable and its defenders go on TV talk shows and even get honors from universities, as ex-CIA analyst Ray McGovern notes.

John Rizzo, the CIA’s former Acting Counsel General, is feeling the heat for his role in blessing what President Barack Obama has now admitted was “torture” during the Bush/Cheney administration. Rizzo went on friendly Fox News to charge that the (still withheld) Senate Intelligence Committee investigation report on torture reflects a “Star Chamber proceeding” and accused some lawmakers of “craven backtracking,” claiming that they had been briefed on the interrogation program years ago.

Rizzo also revealed that he and other former CIA officials implicated in the torture scandal have found an ally of sorts in current CIA Director John Brennan, who was a senior aide to CIA Director George Tenet when the torture practices were implemented and who is now leading the rear-guard defense against the Senate report. 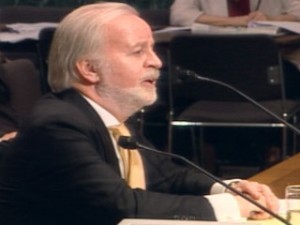 John Rizzo, who was acting General Counsel at the CIA during the first nine years of the “war on terror.”

“He’s been with us ‘formers’ during this period. He has been the honest broker,” Rizzo told Fox News. “He has done the best he can. He is in an extraordinarily difficult position.”

Rizzo’s audacity in defending torture should have prompted some kind of reaction like the one that finally called Sen. Joe McCarthy to account: “Have they no sense of decency, at long last? Have they left no sense of decency?” But Rizzo, like other defenders of the “war on terror” torture policies, have yet to face any meaningful accountability. Rather, some like Rizzo remain respectable figures.

Exhibit A was the fawning reception accorded Rizzo earlier this year at Fordham Law School. After that event, I wrote the following column for “The Catholic Worker,” where people care about public issues of morality:

I could hardly believe my eyes as I read that John Rizzo, the CIA lawyer who got the Justice Department to approve CIA interrogations using “enhanced interrogation techniques,” had been invited to speak at Fordham Law School on Jan. 30, 2014.  Rizzo would be discussing his book, Company Man: Thirty Years of Controversy and Crisis in the CIA an unapologetic apologia for his behavior in cooperating with faux lawyers in the White House and the Justice Department who authorized techniques like waterboarding, when he had ample legal precedent to justify his simply saying “No,” and trying to stop the torture. What lessons would aspiring lawyers at Fordham learn from Rizzo?

I traveled up from Washington, DC, because I needed to see for myself how Rizzo would try to defend abhorrent practices now euphemistically labeled “EITs,” but formerly known as torture.  Indeed, the very term “enhanced interrogation techniques” is a literal translation of “verschaerfte Vernehmung” from the Gestapo Handbuch, and most of the specific techniques Rizzo told CIA officers they could legally use were from the Gestapo Hadbuch’s list 75 years ago under the heading “verschaerfte Vernehmung.”

I thought I had somewhat outgrown my outrage at seeing those who gave “legal” justification for torture (not to mention those who ordered it and carried it out), walking free, writing tell-some books, and being invited into otherwise respectable places, when they should be behind bars.

The only difference I can see between those responsible for verschaerfte Vernehmung and those responsible for enhanced interrogation techniques is that Germany lost the war, and German torturers were held accountable. Nazi lawyer, Wilhelm Frick, defended his lawyerly approach to torturing and killing Jews with these words: “I wanted things done legally. After all, I am a lawyer.” Frick was one of the 11 defendants the Nuremberg Tribunal sentenced to death. He was hanged on Oct. 16, 1946.

The thought of Rizzo at Fordham was downright disorienting from a moral, as well as legal point of view. This is my alma mater, Fordham the Jesuit University of the City of New York where I spent nine years studying, teaching and earning two degrees. And this was Fordham Law School from which my father graduated in 1933, and where he was a professor of law until 1963, teaching a whole generation of budding lawyers.

Had the catastrophe of 9/11 changed Fordham’s moral assessment of torture, just as it had changed other formerly accepted moral and legal norms? Had torture slid out of the moral category of “intrinsic evil?”

There was no ambiguity on this issue 55 years ago at Fordham College, where we were taught that torture, together with rape and slavery, were “intrinsically evil.” Fordham’s permissive slide on torture was shown in bas-relief two years ago when Fordham President Joseph M. McShane SJ described the morality of torture as a “gray area.”

Succumbing to the “celebrity virus,” McShane had invited kidnapping-torture-and drone aficionado (now CIA director) John Brennan to give the main address at Commencement, and threw in an honorary doctorate in “humane letters” (sic). It was, I suppose, because Brennan was a Fordham alumnus who worked in the White House. Does it matter what he actually did there?

When a number of graduating seniors objected to this profaning of their graduation, McShane gave a glib gloss on torture and drone killings in these words: “We don’t live in a black and white world; we live in a gray world.”

And so it is with President Barack Obama and Attorney General Eric Holder, each of whom has said waterboarding is torture but left the CIA torture lawyers and waterboarders in place. Now the country’s two most senior lawyers are winking at another torture practice force-feeding of men without hope who have chosen death by starvation as their only way out of Guantanamo.

If moral reasoning is a shambles, so is a pitiful legal profession that cannot find its institutional voice amid gross violations of the Constitution and other legal and moral norms. It strikes me that this amounts to a petri dish in which the celebrity virus can grow and flourish and law students can be given scandal. What was it that Jesus said about giving that kind of scandal? Something to do with millstones and necks, I think.

Ray McGovern works with Tell the Word, a publishing arm of the ecumenical Church of the Saviour in inner-city Washington.  He served as a CIA analyst for 27 years.

8 comments for “The Rear-Guard Defense of Torture”