Exclusive: The mainstream media’s big takeaway from Richard Nixon’s Watergate resignation is that “the cover-up is always worse than the crime.” But that’s because few understand the crime behind Watergate, Nixon’s frantic search for a file on his 1968 subversion of Vietnam peace talks, reports Robert Parry.

To fully understand the Watergate scandal, which led to President Richard Nixon’s resignation 40 years ago, you have to know the back story starting in 1968 when candidate Nixon took part in a secret maneuver to scuttle the Vietnam peace talks and salvage a narrow victory over Vice President Hubert Humphrey.

In essence, what Nixon and his campaign team did was to contact South Vietnamese leaders behind President Lyndon Johnson’s back and promise them a better deal if they stayed away from Johnson’s Paris peace talks, which President Nguyen van Thieu agreed to do. So, with Johnson’s peace talks stymied and with Nixon suggesting that he had a secret plan to end the war, Nixon edged out Humphrey. 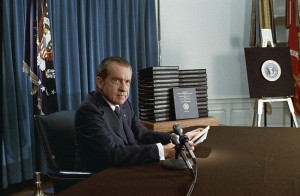 After his election, Nixon learned from FBI Director J. Edgar Hoover that President Johnson had amassed a detailed file on what Johnson called Nixon’s “treason,” but Nixon couldn’t locate the file once he took office and ordered an intensive search for the material that explained why the Paris peace talks had failed. But the material stayed missing.

Nixon’s worries grew more acute in mid-June 1971 when the New York Times and other major U.S. newspapers began publishing the Pentagon Papers leaked by former Defense Department official Daniel Ellsberg. Though the Pentagon Papers covering the years 1945 through 1967 exposed mostly Democratic deceptions, Nixon knew something that few others did, that there was a potential sequel that could be even more explosive than the original.

By mid-1971, an increasingly angry and radical anti-war movement was challenging Nixon’s continuation of the conflict. In early May, a series of demonstrations had sought to shut down Washington. Some 12,000 protesters were arrested, many confined at RFK Stadium in a scene suggesting national disorder.

In June, the Pentagon Papers further fueled the anti-war fury by revealing many of the lies that had led the nation into the bloody Vietnam quagmire. So, Nixon recognized the political danger if someone revealed how Nixon’s pre-election maneuvers in 1968 had prevented President Johnson from bringing the war to an end. Nixon became desperate to get his hands on the missing report (or file) about the failed peace talks.

In a series of tape-recorded meetings beginning on June 17, 1971, Nixon ordered a break-in (or even a fire-bombing) at the Brookings Institution where some Nixon insiders believed the missing material might be hidden in the safe.

“I want it implemented,” Nixon fumed to his senior aides, Henry Kissinger and H.R. “Bob” Haldeman. “Goddamnit, get in and get those files. Blow the safe and get it.”

On June 30, 1971, Nixon returned to the topic, berating Haldeman about the lack of action and suggesting that a team be formed under former CIA officer E. Howard Hunt to conduct the Brookings break-in. “You talk to Hunt,” Nixon told Haldeman. “I want the break-in. Hell, they do that. You’re to break into the place, rifle the files, and bring them in. Just go in and take it. Go in around 8:00 or 9:00 o’clock.”

There was even talk about fire-bombing the centrist Washington think tank, but the break-in never apparently happened, although Brookings’ historians say there was an attempted break-in during that time frame. The historians also say that Brookings never possessed the missing file or report.

Nevertheless, Nixon and his advisers had crossed an important Rubicon, creating a team of burglars who would become known as the Plumbers.

This team, under Hunt’s command, would break into the office of Ellsberg’s psychiatrist seeking information to discredit the whistleblower and into the Democratic National Committee at the Watergate building on May 28, 1972, to plant bugs and rifle through files. On June 17, 1972, when the team returned to the Watergate to plant more bugs, five of the burglars were arrested by Washington police.

Though Nixon and his team were able to keep a lid on the scandal until the November election, which he won handily over Sen. George McGovern, the cover-up eventually proved to be Nixon’s undoing. As investigators closed in on Nixon’s use of hush money and other obstructions, some insiders, such as White House counsel John Dean, began to talk.

When Congress learned that Nixon had taped many of his Oval Office conversations, the President faced demands for these recordings, which Nixon fought furiously to protect. Eventually, however, the U.S. Supreme Court ordered the tapes be turned over and Nixon’s political fate was sealed. On Aug. 8, 1974, he announced to the nation that he would resign and, on Aug. 9, he signed the official papers and departed from the White House aboard a Marine helicopter.

But the mistaken lesson that the U.S. mainstream media derived from the scandal was that “the cover-up is always worse than the crime,” a silly saying that reflected the media’s ignorance about what the underlying crime was. In this case, the historical record now shows that Nixon set the Watergate scandal in motion in 1971 out of fear that perhaps his greatest crime would be exposed how he sabotaged Vietnam peace talks to gain a political edge in an election.

Of the 58,000, U.S. soldiers who died in Vietnam more than 20,000 died during Nixon’s presidency. Possibly a million more Vietnamese died in the Nixon years. But, in the end, Nixon accepted a peace deal in late 1972 similar to what Johnson was negotiating in 1968. And the final outcome was not changed. After U.S. troops departed, the South Vietnamese government soon fell to the North and the Vietcong.

Several years ago, I located the missing file at the LBJ Library in Austin, Texas. Before leaving office in January 1969, Johnson had ordered his national security adviser Walt Rostow to take the top secret material out of the White House with instructions to hold it until after Johnson died and then decide what to do with it.

Rostow labeled the file “The X-Envelope” and retained possession until after Johnson’s death on Jan. 22, 1973, just two days after Nixon began his second term. Eventually, Rostow decided to turn over the file to the LBJ Library with instructions to keep it sealed for at least 50 years. However, library officials decided to open “The X-Envelope” in 1994 and began the process of declassification.

The documents many based on FBI wiretaps show that Johnson had strong evidence about Nixon’s peace-talk sabotage, particularly the activities of campaign official Anna Chennault who passed messages to South Vietnamese Ambassador Bui Diem in Washington urging the South Vietnamese leaders to maintain their boycott of the Paris peace talks.

On Nov. 2, the FBI intercepted a conversation in which Chennault told Bui Diem to convey “a message from her boss (not further identified),” according to an FBI cable. Chennault said “her boss wanted her to give [the message] personally to the ambassador. She said the message was that the ambassador is to ‘hold on, we are going to win’ and that her boss also said, ‘hold on, he understands all of it.’ She repeated that this is the only message ‘he said please tell your boss to hold on.’”

That same day, Thieu recanted on his tentative agreement to meet with the Viet Cong in Paris, pushing the incipient peace talks toward failure.

Several years ago, the National Archives released tape recordings of Johnson’s phone calls further clarifying the depth of Johnson’s knowledge and anger. On the night of Nov. 2, Johnson telephoned Senate Republican Leader Everett Dirksen of Illinois and urged him to intercede with Nixon.

“The agent [Chennault] says she’s just talked to the boss and that he said that you must hold out, just hold on until after the election,” Johnson said. “We know what Thieu is saying to them out there. We’re pretty well informed at both ends.”

Johnson then issued a thinly veiled threat to go public. “I don’t want to get this in the campaign,” Johnson said, adding: “They oughtn’t be doing this. This is treason.”

Johnson continued: “I think it would shock America if a principal candidate was playing with a source like this on a matter of this importance. I don’t want to do that [go public]. They ought to know that we know what they’re doing. I know who they’re talking to. I know what they’re saying.”

Though Johnson personally spoke with Nixon about the Chennault issue, Nixon simply denied doing anything wrong and the peace stalemate continued through the final days of the campaign. On the day before the election, Johnson had one last chance to expose Nixon’s “treason” when the White House was asked by the Christian Science Monitor to respond to a Saigon-datelined article drafted by correspondent Beverly Deepe who had discovered the Republican obstruction from her South Vietnamese sources.

Johnson consulted with Rostow, Secretary of State Dean Rusk and Defense Secretary Clark Clifford in a Nov. 4 conference call. Those three pillars of the Washington Establishment were unanimous in advising Johnson against going public, mostly out of fear that the scandalous information might reflect badly on the U.S. government.

“Some elements of the story are so shocking in their nature that I’m wondering whether it would be good for the country to disclose the story and then possibly have a certain individual [Nixon] elected,” Clifford said. “It could cast his whole administration under such doubt that I think it would be inimical to our country’s interests.”

Johnson concurred with their judgment. An administration spokesman refused to confirm or deny the story, leading the Christian Science Monitor’s editors to spike Deepe’s scoop.

Nixon’s interference with the Paris peace talks remained secret as Americans went to the polls, many believing that Nixon did have a plan to end the war. Instead, once in the White House, Nixon escalated the war with heavier bombing of North Vietnam and an invasion of Cambodia. U.S. combat involvement would continue for four more years.

Yet, even as the historical record has become clearer in recent years, the old conventional wisdom about Watergate as a “third-rate burglary” that only proved politically devastating to Nixon because he engaged in an ill-advised cover-up remains the prevailing narrative. If you ask most mainstream U.S. journalists about the prime lesson of Watergate, they’ll probably tell you that it shows that “the cover-up is always worse than the crime.”

7 comments for “The Heinous Crime Behind Watergate”