While Official Washington excuses Israel’s latest slaughter of Gazans as justifiable self-defense, many thoughtful Jews are lamenting how the traditional humanism of Judaism is being despoiled by the brutal practices of the Israeli government, writes Danny Schechter.

When I was growing up in a Jewish community in New York in the late Fifties, there was a predictable collective response to news events that expressed itself in one question: “Is it good for the Jews?”

Many persecuted minorities made up largely of immigrants operate in an inward looking culture characterized by a fear of persecution and, among Jews, there was a desire to keep a low profile for fear of stirring up anti-Semitism or just “trouble.” 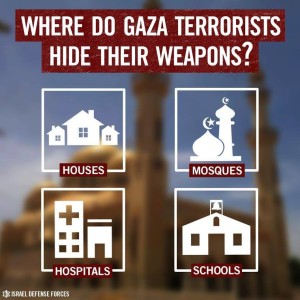 A graphic released by the Israeli Defense Forces to justify Operation Protective Edge’s destruction of so many civilian structures in Gaza. (Israeli government graphic)

Jews who have been victimized throughout history tend to look at the world though the prism of that victimization, even when their own community is being viewed by others as victimizers. Their fears are easily manipulated with appeals to a collective memory.

Back in my youth, every time some big crook’s picture was splashed in the tabloids, I was reassured by being told,

“at least he isn’t Jewish.” Although later, I learned about Jewish gangsters like Meyer Lansky who practically ran the Mafia. If you want proof, rent one of those “Godfather” movies.

Later, I learned from YIVO, the Institute for Jewish Research, there had been as many Jewish criminals in our community as in others. Learning about this helped me contextualize what I came to see as a perversion of Jewish values into a dominant Zionist narrative that embraced or ignored crimes from the earliest days of the conquest of Palestine up through the current war on the people of Gaza.

Jewish writers have not downplayed this history, reports the YIVO Encyclopedia that even speaks of Jews from Latin America:

“Literary stereotypes, exemplified by the refined Jewish pimp in Sholem Aleichem’s short story ‘A mentsh fun Buenos-Ayres’ (‘A Man from Buenos Aires’; 1909) created the image of white slavery as a quintessentially Jewish occupation. Scholars remain divided as to the extent to which Jews were disproportionately represented in the trade. The association of Jews with international prostitution prompted energetic communal initiatives in Europe and in the Americas against gangs of Jewish procurers.”

Once Israel was established after a war of terror against the British, the new government began to eradicate all vestiges of ancient Jewish institutions that represented thousands of years of Yiddish-language culture which was viewed as a culture of weakness and replaced it with Hebrew and the cult of the macho sabra and military heroism.

This attitude infests the whole society despite formal equality for woman. In a recent interview, Joanne Zack-Pakes, director of Open Door Counseling Centers, the flagship project of the Israel Family Planning Association, speaks of an Israeli Culture “that is very sexual, but specifically a culture shaped by macho sexuality and male power.”

No wonder, soon the Kibbutzim that relied on Jewish labor to avoid exploiting Arabs were gone. The Labor Movement was gone. The Right became ascendant. The seeds of hatred and contempt towards Palestinians were planted and nurtured as their communities were displaced from the own lands by a settler-run almost colonial society, which based its claim to the occupied lands on a questionable biblical mythology. Noam Chomsky says it is not like South Africa’s apartheid. It’s worse.

Now, let’s fast-forward into the present and the era of Wall Street with a disproportionate number of leading Jewish bankers and lawyers. Until recently, that group included Bernard Madoff, who typified the hypocrisy of being a prominent philanthropist while at the same time a skillful and serial financial gangster. He was not above ripping off Jewish charities and the rich and poor alike. He even took money from Eli Wiesel, the pro-Israeli author of prize-winning books on the Holocaust and a backer of the Israeli firsters.

I cite all this not to feed the racist and fabricated conspiracy theorists that have been blaming “the Jews” for everything from time immemorial, from the fraudulent “protocols of Zion” conspiracy through the ravings of Nazis then and now.

My concern is more internal. What has our community done to reinforce our own stereotypes and actively if not aggressively cultivated a reputation for “toughness” as an antidote to the well known but misleading image of a people who passively went to the gas chambers?

In some circles, Jews blame themselves while vowing “Never Again” and supporting or rationalizing extreme militarism and systematic human rights abuses in the name of Israel and Jewish survival.

The extremist Jewish right-wing encourages us to be even tougher, to forget about standing up for justice and identifying with oppressed people. An article in leftist-turned-rightist David Horowitz’s website, FrontPage, features a prominent U.S. PR expert, Ronn Torossian, singing the praises of “the top Ten Living Tough Jews.”

“The list of the Top 10 Living Tough Jews it is not only about brute physical strength,” he writes, “it is about a people who are smart, strong, resilient, rugged, bold and fearless. This is a reflection of good, tough Jews who are positive representations of the Jewish people, (no gangsters here) don’t let a yarmulke fool you.”

And, yet, who tops his toughness list of role models, the people he wants us to emulate?

1.“Israel Defense Forces: All of the men and women of the Israel Defense Forces the holy Jewish army are the toughest (and holiest) Jews one can ever imagine. They protect the people of Israel against tremendous odds, and with Israel’s survival threatened daily these Jews are consummate warriors, fighting not only for a country but for an important ideal.”

Weighing in at number 8 is none other the number one funder of America’s right-wing politicians, the man every GOP hopeful sucks up to:  Sheldon Adelson. “The richest Jew in the world, Adelson, is famously resilient, stubborn and focused on winning. The son of Jewish immigrants, Adelson grew up lower-class, dropped out of the City College of New York and has built one of the largest casino empires in the world?”

You get the idea. Be tough. Become a zillionaire. And run a country that now has the fourth-largest military in the world (U.S. funded of course) that can target an overcrowded ghetto like Gaza, not unlike those many Jews were once forced to live in, turning it into a shooting gallery for the most sophisticated weaponry, all justified as necessary for their country’s survival.

“The Big Lie makes it clear to the Palestinians that Israel will continue to wage a campaign of state terror and will never admit its atrocities or its intentions,“ he writes.

“The vast disparity between what Israel says and what Israel does tells the Palestinians that there is no hope. Israel will do and say whatever it wants. International law, like the truth, will always be irrelevant. There will never, the Palestinians understand from the Big Lie, be an acknowledgement of reality by the Israeli leadership.”

Hedges adds, “Israel’s ambassador to the United States, Ron Dermer, in a Big Lie of his own, said last month at a conference of Christians United for Israel that the Israeli army should be given the Nobel Peace Prize   a Nobel Peace Prize for fighting with unimaginable restraint. The Big Lie destroys any possibility of history and therefore any hope for a dialogue between antagonistic parties that can be grounded in truth and reality.”

To Jewish Rabbis like Michael Lerner of Tikkun Magazine, it’s not just the truth that is being trashed. It is Judaism itself. He writes on Salon: “it is the brutality of that assault which finally has broken me into tears and heartbreak. While claiming that it is only interested in uprooting tunnels that could be used to attack Israel, the IDF has engaged in the same criminal (emphasis mine) behavior that the world condemns in other struggles around the world: the intentional targeting of civilians (the same crime that Hamas has been engaged in over the years in its bombing of Sdeyrot and its current targeting of Israeli population centers, thankfully unsuccessfully, which correctly has earned it the label as a terrorist organization).

“Using the excuse that Hamas is using civilians as ‘human shields’ and placing its war material in civilian apartments, a claim that a UN human rights investigatory commission found groundless when it was used the last time Israel invaded Gaza in 2008-2009 and engaged in similar levels of killing civilians), Israel has managed to kill over 1,500 Palestinians and has wounded over 8,000 thousand more.”

On and on he goes, as someone who has backed Israel for years,  excoriating the way Israel’s needs and a Zionist ideology as defined by a harsh right-wing government and a military-dominated “security cabinet “has come to speak for and define the needs of Jews in the world.”

Rabbi Lerner realizes that Israel — by its use of military power, political lobbying and media manipulation — now defines the narrative of  what being Jewish is supposed to be. Critics, especially Jews like myself, are dismissed and marginalized, if not attacked violently in Israel and labeled as “self-haters” for not embracing this redefinition of Judaism as militarism. Idealism has become authoritarianism, a new fascism with a Hebrew face.

Rabbi Lerner adds, “I’m heartbroken to see the Judaism of love and compassion being dismissed as ‘unrealistic’ by so many of my fellow Jews and rabbis. Wasn’t the central message of Torah that the world was ruled by a force that made possible the transformation from ‘that which is’ to ‘that which can and should be’? And wasn’t our task to teach the world that nothing is fixed, that even the mountains can skip like young rams and the seas can flee before the triumph of God’s justice in the world?

“Instead of preaching this hopeful message, too many rabbis and rabbinical institutions are preaching a Judaism that places more hope in the might of the Israeli army than in the capacity of human beings (including Palestinians) to transform their perception of ‘the other’ and overcome their fears.”

So whatever Israel is “winning” the Jewish People are losing. The key lesson of the Holocaust was human rights of all peoples need protection. That is not a lesson that the droning on robots of Israel’s Sparta-like Israeli PR Army has any use for. The rest of the world is judging us. Jews have to judge us as well.

Let me close with the words of Ahmad Kathrada who spent 26 years in prison in South Africa alongside Nelson Mandela and was considered his closest comrade. He recently visited Palestine and said it felt all too familiar. He wrote recently:

“What worries me is the sheer impunity with which Israel acts. It reminds me of the many years that apartheid was allowed to flourish in South Africa with little constructive action on the part of the major powers such as the US, France, Germany and the UK, including some of the leading Arab states such as Saudi Arabia and Egypt.

“While writing this, my thoughts go back to August-September of 1951, when I visited the Auschwitz concentration camp in Poland. I find myself asking: ‘Has apartheid Israel so quickly forgotten the millions of Jews, communists and gypsies who were exterminated by the Nazis, that they now commit the same crimes?’”

Can his observation also be applied to Israel and to all the countries like our own that fall over each other endorsing what Israel says and then ignoring what it does. Among the other more immediate crimes against Palestinians, international law and history, Israel gives Jews a bad name.

10 comments for “How Israel Trashes Judaism”