The U.S. economy’s long slog back from the 2008 financial crisis has tried to ignore the looming question of whether a repeat is likely. Some economists think the Dodd-Frank reforms have largely ended “too big to fail” risk-taking but others aren’t so sure, as Michael Winship notes.

Analyzing a government report is like eating and digesting a meal, better to take it slowly than gobble quickly and suffer the possible consequences. Example: last Thursday’s report from the Government Accountability Office (GAO) on whether or not large financial institutions were still perceived as “too big to fail.”

The immediate takeaway by many in the media, government and investment community was that the need for a taxpayer subsidy like the bailouts of 2008  “may have declined or reversed in recent years” and, in the words of Mary J. Miller, the Treasury Department’s under secretary for domestic finance, “We believe these results reflect increased market recognition of what should now be evident Dodd-Frank ended ‘too big to fail’ as a matter of law.” 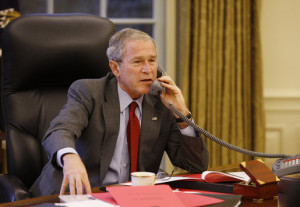 But with just a little time to digest the GAO’s findings, much of the response has shifted to, “Not so fast.”

On the day of the report’s release, Sen. Sherrod Brown, D-Ohio, who, with Sen. David Vitter, R-Louisiana, requested the GAO analysis and co-sponsors the Terminating Bailouts for Taxpayer Fairness Act, held hearings.

Stanford University economist Anat Admati, a recent guest on Moyers & Company, testified that, “The main problem with the guarantees is they reinforce and create perverse incentives and intensify the conflicts of interest between the banks and the rest of society. Requiring that banks fund themselves so that those who benefit from the upside of risk bear more of its downside brings about more safety and corrects distortions.”

In The New York Times, columnist Gretchen Morgenson writes, “Six years after the financial crisis, it’s clear that some institutions remain too complex and interconnected to be unwound quickly and efficiently if they get into trouble.

“It is also clear that this status confers financial benefits on those institutions. Stated simply, there is an enormous value in a bank’s ability to tap the taxpayer for a bailout rather than being forced to go through bankruptcy.”

Morgenson adds, “Were we to return to panic mode, the value of the implied taxpayer backing would rocket. The threat of high-taxpayer bailouts remains very much with us.”

Financial professionals echo her concern. Camden Fine, president and CEO of the Independent Community Bankers of America, notes in American Banker (not without self-interest) that while the size of big bank subsidies may have “diminished since the crisis the larger point is that the biggest and riskiest financial firms still have a competitive advantage in the marketplace. They can still access subsidized funding more cheaply than smaller financial firms because creditors believe the government would bail them out in the event of a crisis. No matter how you cut it, a subsidy is a subsidy. And this subsidy is one that puts the American taxpayer on the hook.

“Meanwhile, the largest financial institutions are only getting bigger. According to our analysis of call report data from the Federal Deposit Insurance Corp., since the end of 2009, the assets of the six largest financial institutions have grown each year. Their total assets rose from $6.41 trillion in 2009 to $7.22 trillion in 2014, a total increase of $800 billion. The top six banks are also responsible for more than half of the $2 trillion increase in total U.S. banking assets in the years since 2009.”

In those same pages, Mayra Rodriguez Valladares, managing principal at a capital markets and financial regulatory consulting firm, is concerned that there are “signs that banks have failed to learn from the detrimental effects of the global credit crisis and pleas from bank regulators. This year, large banks are loosening their credit underwriting standards and are extending leveraged loans to companies.

“Additionally, large banks continue to exhibit incredibly weak operational risk management. Operational risk is the threat of a breach in the day-to-day running of a business because of people, processes, systems, and external events. Since big banks have yet to make ethics a top priority, not a day goes by that one does not see examples of operational risk. Market rate manipulations and incorrect foreclosure procedures continue to plague banks and their reputation.”

She concludes, “As the U.S. economy continues to grow and the financial crisis is relegated to the dustbin of history, big banks are taking bigger chances. The challenge for regulators now is to remember that when the party gets going, it is difficult to stop the champagne flowing.”

Gretchen Morgenson’s colleague at the Times, Paul Krugman, has a more positive point of view, while asking the crucial question, “How do you rescue a banking system without rewarding bad behavior?

“The answer is that the government should seize troubled institutions when it bails them out, so that they can be kept running without rewarding stockholders or bondholders who don’t need rescue. In 2008 and 2009, however, it wasn’t clear that the Treasury Department had the necessary legal authority to do that. So Dodd-Frank filled that gap, giving regulators Ordinary Liquidation Authority, also known as resolution authority, so that in the next crisis we can save ‘systemically important’ banks and other institutions without bailing out the bankers.”

The GAO report, he writes, “suggests that reform has done at least part of what it was supposed to do Wall Street and its allies wouldn’t be screaming so loudly, and spending so much money in an effort to gut [Dodd-Frank], if it weren’t an important step in the right direction.”

Nonetheless, as Senators Brown and Vitter stated, “Today’s report confirms that in times of crisis, the largest megabanks receive an advantage over Main Street financial institutions. Wall Street lobbyists may try to spin that the advantage has lessened. But if the Army Corps of Engineers came out with a study that said a levee system works pretty well when it’s sunny, but couldn’t be trusted in a hurricane, we would take that as evidence we need to act.”