The U.S. Congress is rushing to give Israel another $225 million to replenish its supply of “Iron Dome” anti-missile missiles depleted during its war with Gaza, a boost to Israel’s war effort and a shot in the arm for its arms industry, as Danny Schechter explains.

When you go to a dictionary to look up dome, you find lots of references to hemispherical structures or forms. You also find that it is slang word for the human head.

And so, it may not be much of a stretch to look at the “Iron Dome” counter-missile system utilized by the Israeli forces as a perfect metaphor for the men authorizing its deployment and use, the iron domes of the heads who head up Israel’s military, and orchestrate its most assuredly not defensive war against Gaza. 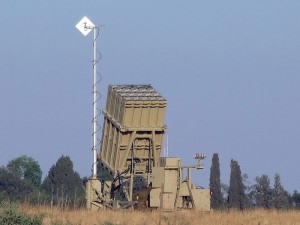 It is also a metaphor for the war itself. The finger pushing reliance on computer technology, whether with domes or drones, tends to block all sensitivity of the human costs and consequences.

CNN reports that, “Israel uses Iron Dome to block rockets from striking its major population centers. It targets incoming rockets and fires an interceptor missile to destroy them in the air. The Israeli government says Iron Dome has intercepted more than 400 rockets fired from Gaza since the conflict broke out in early July.”

Newsweek adds that it is not a perfect system, “Israeli and U.S. officials have said Iron Dome systems are responsible for shooting down more than 90 percent of the rockets they have engaged, while ignoring missiles on a trajectory to fall wide. That accounts for about a fifth of the rockets Israel has said militants have fired into the country during the latest crisis.”

(Interesting about this paragraph is that it does not mention that as an occupying power, Israel has an obligation to protect the people in Gaza. It also does not mention Hamas, a political party/movement, but refers only to “militants,” many of whom are Palestinians who fled Israel, the country now pulverizing Gaza.)

If true, that means that only a fifth or 20 percent of the missiles fired have been intercepted, a fact that is at variance with the impression Israel fosters about the precision nature of its technology. Also, missing from most of the coverage is the fact that the United States poured nearly a billion dollars into building the project.

Foreign Policy reported in July before Israel invaded Gaza again: “Iron Dome, the anti-missile system that is seen as so successful at preventing Hamas’ rocket attacks from being effective that it is credited, in part, for having kept Israeli troops from mounting a ground invasion of Gaza, is getting major new funding from Congress. The infusion of cash will radically bolster the program even if can’t guarantee peace in the region – even in the short term.”

FP’s Kate Brannen: “The additional money for Iron Dome cleared one of its final hurdles Tuesday, when a key Senate appropriations subcommittee unanimously voted to double the Pentagon’s $175 million request for fiscal year 2015. The full committee will consider the defense appropriations bill on Thursday. Meanwhile, three other panels have already signed off on the funding expansion, making it all but certain the additional money will be provided. Iron Dome has received $720 million in American funding since 2011, when the United States became directly involved in the program.”

Of course, the Dome did not stop Israel’s dome-heads from invading Gaza, but it may be playing another mostly unreported role, argues Samer Jaber, a former Palestinian political prisoner who graduated from Brandeis and studied at Harvard and MIT, speaking on Al Jazeera:

“Reporting on the Dome has provided near-real time televised war coverage. The media has repeated statistics demonstrating its success rates – although there appears to have been a reluctance to scrutinize official Israeli figures and an absence of voices from those who might question its effectiveness.

“It is understandable that Israeli officials would want to promote the idea of the Dome’s success. It gives the Israeli public a sense of safety and security. It demonstrates that the state is fulfilling one of its commitments to its citizens – the duty to protect.

“But it is undeniable that this unquestioning tone helps provide a certain marketing messageFollowing Operation Pillar of Defense, launched against Gaza in November 2012, seven nations, including the United States and South Korea, expressed interest in buying some variant of the Iron Dome system. As the Israeli economy depends on the sale of weapons and other military equipment, this latest round of war on Gaza is another opportunity for Israel’s weapon consortium to boost its business around the world.”

One reason for the timing of this Gaza invasion may be that sales of the Dome may soon have lower-cost competition, thanks to hacking, allegedly, by a cyber-war crew from China.

RT reported: “In addition to taking information on the Iron Dome, the attackers were also able to nab plans regarding other projects including Unmanned Aerial Vehicles, ballistic rockets, and ‘detailed schematics and specifications’ for the Arrow III missile interceptor.

“According to independent journalist Brian Krebs, the intrusion occurred between 2011 and 2012 and was carried out by China’s infamous ‘Comment Crew’ a group of cyber warriors linked to the Chinese People’s Liberation Army (PLA).”

Chinese hacking is not unique in looking for short cuts to commercial applications. The underlying technology is not all Israeli either, with Boing credited with developing missile targeting.

The political and military costs have to be factored in as well: Again, Foreign Policy: “Israel is reporting that Iron Dome has had a 90 percent success rate, though it has only been used against 27 percent of the Hamas rockets. Because of the high cost of each interceptor — which the Washington Post pegs at roughly $20,000 a piece — Israel only uses the system when its radars indicate that a rocket seems likely to hit a populated area. The Hamas rockets are thought to cost less than $800 each.”

Note, how the statistics in all of these articles supplied by the salesmen/generals behind the Dome marketing effort differ from publication to publication.

It’s also significant that Israeli propagandists seem to now be dropping their focus on the threat of missiles by focusing instead on “Terror Tunnels” as their more visible media talking point.  Of course they don’t reference the tunnels in Warsaw that enabled some Jews to escape the Nazis, or the Cu-Chi Tunnels in Vietnam that allowed resistance fighters to hide from the savage bombing of U.S. napalm and Agent Orange and other war crimes.

Noura Erakat debunks these Israel’s talking points on Gaza in The Nation: “Israel claims that its current and past wars against the Palestinian population in Gaza have been in response to rocket fire. Empirical evidence from 2008, 2012 and 2014 refute that claim.”

She argues that diplomacy that led to a “lull arrangement” was what stopped missile attacks, as confirmed by a press release of the Israeli Ministry of Foreign Affairs at the end of July in 2008:

“During its first month, the lull arrangement resulted in a significant drop in rocket and mortar fire at Israel. A relative calm has settled over Sderot and Israeli population centers near the Gaza Strip, occasionally broken by rockets and mortar bombs fired by terrorist organizations which oppose the lull (mostly local Fatah networks, with the Palestinian Islamic Jihad violating the lull only on one occasion).”

Jaber’s final point merits a media investigation as well: “Israel’s intransigent approach to the political issue of the colonization of Palestine – whereby it employs security solutions rather than working towards a political settlement – may in some part be explained by the Iron Dome’s profitability.”

War has always been about business, just as the constant propaganda use of the Holocaust itself as the subtext is often denigrated as “Shoah business” by critics of Israel’s reliance on fear-mongering as a way of raising money and support while disguising offensive warfare as defensive action.

Dome-heads in Tel Aviv now have orchestrated their legions of often empty-minded cult-like bi-partisan dome-head supporters in Congress backed not just by Jewish groups but right-wing evangelical Christians for Israel who are trying to silence all debate about the massive killing of civilians in Gaza, despite all their rhetoric about curtailing government spending and the sad state of the U.S. economy.

Their mantra is now built around the Iron Dome show with its underlying arrogance: See how clever we are!

The media does its bit by blaming the war on the resistance to the war and, then, refusing to investigate and report on massive spending to fund Israel in an atrocity that shows how domed their own consciences are.

← Postponing Costs for Bad Decisions
Putting the Dollar in Jeopardy →