The Tea Party extremism boiling from beneath the Republican Party bubbled to the top in the GOP’s Texas state platform revealing ugly bigotries and a frantic know-nothing-ism, writes Michael Winship.

Imagine the official presentation of a worldview concocted by conspiracy theorists and an assortment of cranks and grumpy people. Conjure a document written by scribes possessed of poison pens soaked in the inkpots of Ayn Rand and the Brothers Grimm, caught in the grip of a dark dystopian fantasy of dragons and specters, in which everyone’s wrong but thee and me and we’re not sure of thee.

No, this is not some “Game of Thrones” spinoff. Ladies and gentlemen, we give you the official 2014 platform of the Republican Party of Texas, 40 pages of unrestrained, right-wing bluster against you name it, women, minorities, immigrants, Muslims, gays, Obamacare, the Internal Revenue Service, red light cameras, the EPA, the World Bank, vaccinations, well, you get the picture. In the spirit of the Alamo, this is a work straight out of the 19th century with no option for surrender. 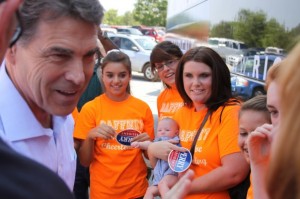 Pick a page, any page, and you’ll find yourself pitched through the rabbit hole into an alternate reality. Homosexuality? “ Chosen behavior that is contrary to the fundamental unchanging truths that have been ordained by God in the Bible Homosexuality must not be presented as an acceptable alternative lifestyle, in public policy, nor should family be redefined to include homosexual couples.”

But it can be cured! The Texas Republicans “recognize the legitimacy and efficacy of counseling, which offers reparative therapy and treatment for those patients seeking healing and wholeness from their homosexual lifestyle.”

That’s about as close to George W. Bush’s “compassionate conservatism” as the good ole boys (and 12 or so women) of the platform committee get. Corporal punishment? By all means: spare the rod and spoil the child.

Guns, yes, please, more! “No level of government shall regulate either the ownership or possession of firearms.” Foreign aid no way, “except in cases of national defense or catastrophic disasters, with congressional approval.”

As for public schools, who needs them? “Since data is clear that additional money does not translate into educational achievement, and higher education costs are out of control, we support reducing taxpayer funding to all levels of education institutions.”

And Social Security let ‘em eat pork rinds: “We support an immediate and orderly transition to a system of private pensions based on the concept of individual retirement accounts, and gradually phasing out the Social Security tax.”

Roe v. Wade must be overturned: “We revere the sanctity of human life.” And yet, “Properly applied capital punishment is legitimate, is an effective deterrent, and should be swift and unencumbered.”

Climate change is “a political agenda which attempts to control every aspect of our lives. We urge government at all levels to ignore any plea for money to fund global climate change or ‘climate justice’ initiatives.” This despite the assessment of the Texas Commission on Environmental Quality that “Large sections of the state are experiencing exceptional or extreme drought.”

All of this is disturbing enough, but what may be the most troubling are the platform planks urging the elimination of virtually any federal authority, the repeal of certain parts of the Constitution or insisting on archaic interpretations that most of us thought were put to bed more than a century ago.

Executive decisions by any agency would have to be approved by Congress and as for all “unelected bureaucrats” you mean civil servants, too? “we urge Congress to use their constitutional authority to defund and abolish these positions and return authority to duly elected officials.”

Further, the FBI, DEA, ATF, immigration officers ANY federal enforcement activities within Texas “must be conducted under the auspices of the county sheriff with jurisdiction in that county.”

The Texas GOP supports repealing the 17th Amendment, which in 1913 established the direct election of U.S. senators by the voters, taking that power away from state legislatures, which famously could be bought for pretzels and cheese. In the Gilded Age, in part because of the ease of wholesale bribery at the state level, corporations like Standard Oil and Union Pacific had the U.S. Senate in their pocket (not that it’s much better these days).

In their frenzied dreamland, what’s left of the Voting Rights Act would be repealed and more stringent restrictions on who’s allowed to vote would be put in place, further disenfranchising minorities. What’s more, Congress is to “withhold Supreme Court jurisdiction in cases involving abortion, religious freedom and the Bill of Rights” (!) and the Texas state legislature is to “ignore, oppose, refuse, and nullify any federal mandated legislation which infringes upon the states’ 10th Amendment Right.”

State nullification of federal law has been consistently forbidden by the Supreme Court since 1809 and, with slavery, was at the core of the losing Confederate cause 150 years ago. Then it was again used unsuccessfully by those opposed to the civil rights movement of the Sixties. Still, it refuses to go away, like an antibiotic-resistant strain of strep.

No wonder the current slogan of Texas’ official tourism campaign is, “It’s like a whole other country.” They ain’t just whistling “Dixie.”

But for all the platform’s Texas-style bravado, there is no mention of Gov. Rick Perry’s much touted “Texas miracle,” his and other state Republicans’ boast that since 2009, “about 48 percent of all the jobs created in America were in Texas” due to low taxes and little regulation.

There is in the document a general opposition to taxes, a call for the elimination of the minimum wage and this: “We believe that a favorable business climate and strong economy emerges when government is limited by low taxation, sensible regulation, and tort reform. The American private sector powers our economy and is the true creator of jobs.”

Maybe the bragging was backburnered because, as Phillip Longman points out in Washington Monthly magazine, the state may have no income tax, “But Texas has sales and property taxes that make its overall burden of taxation on low-wage families much heavier than the national average, while the state also taxes the middle class at rates as high or higher than in California

“And unlike in California, middle-class families in Texas don’t get the advantage of having rich people share equally in the cost of providing government services. The top 1 percent in Texas have an effective tax rate of just 3.2 percent. That’s roughly two-fifths the rate that’s borne by the middle class, and just a quarter the rate paid by all those low-wage ‘takers’ at the bottom 20 percent of the family income distribution. This Robin-Hood-in-reverse system gives Texas the fifth-most-regressive tax structure in the nation.

“Middle- and lower-income Texans in effect make up for the taxes the rich don’t pay in Texas by making do with fewer government services, such as by accepting a K-12 public school system that ranks behind forty-one other states, including Alabama, in spending per student.”

In the words of “Texas on the Brink,” the annual report written by the progressive Legislative Study Group, a research caucus in the Texas House, “In Texas today, the American dream is distant. Texas has the highest percentage of uninsured adults in the nation. Texas is dead last in percentage of high school graduates. Our state generates more hazardous waste and carbon dioxide emissions than any other state in our nation. If we do not change course, for the first time in our history, the Texas generation of tomorrow will be less prosperous than the generation of today.”

Instead of real solutions trying to come to grips with real problems, the Texas GOP went for the chimerical bucket list of the extreme right. Granted, there are plenty of excellent reasons to be angry with the federal government, and like any party platform this document is more for show than anything else. But it is a frightening reminder of what’s happening within the Republican Party in Texas and elsewhere in the country.

As Mark Binelli recently wrote in Rolling Stone, “After nearly six years of pumping out cynical horror stories involving our nefarious president and a Washington bureaucracy run amok, the right-wing fear machine has managed to reduce its target audience to a quivering state of waking nightmare, jumping at shadows.

“If, to paraphrase Baudelaire by way of The Usual Suspects, the devil’s greatest trick was to convince the world he didn’t exist, the modern GOP’s greatest trick might have been convincing its electorate that he does, and that the federal government exists as some kind of infernal machine. While impressive, this trick has also proved to be a very dangerous one, as states of panic have a tendency to produce rather extreme results.”

Binelli quotes Texas Democratic strategist Harold Cook: “When I moved to Austin in 1989, Texas politicians were conservative in the classic sense of the term: They wanted to make sure government was small and unintrusive. There were pretty strong libertarian and populist streaks, and that still exists among the electorate, but what’s new, I think, is a litmus test driven by the Tea Party wing, where if you’re not mad enough, if you don’t demonstrate a certain level of hatred, then your motives are suspect.

“Your final votes on legislation don’t matter. These two politicians might be voting exactly alike but the one the Tea Party loves is running around the district all the time screaming about how much he hates Obama.”

More than 150 years ago, the state’s governor, Sam Houston, hero of the Texas War of Independence, recognized this same spirit of suicidal extremism, tinctured with bigotry and fantasy, infecting his fellow Texans as they prepared to leave the United States and join forces with the Confederacy. Houston, while no fan of abolition, warned against secession; that the South would be overwhelmed.

In a speech on September 22, 1860, at a mass meeting in Austin, he declared, “You are asked to plunge into a revolution; but are you told how to get out of it? Not so; but it is to be a leap in the dark, a leap into an abyss, whose horrors would even fright the mad spirits of disunion who tempt you on

“Are we to sell reality for a phantom?”

The Texas GOP and far too many others, say yes.