The passing of former Soviet Foreign Minister Eduard Shevardnadze has roused praise from the West  though opinions are mixed among the people he served but one point missing in the obits was the U.S. promise made to him (and broken) not to exploit Moscow’s retreat, ex-CIA analyst Ray McGovern writes.

Absent from U.S. media encomia for recently deceased former Soviet Foreign Minister Eduard Shevardnadze is any mention of the historic deal he reached with his U.S. counterpart James Baker in 1990 ensuring that the Soviet empire would collapse “with a whimper, not a bang” (Mr. Baker’s words).

Mr. Baker keeps repeating that the Cold War “could not have ended peacefully without Shevardnadze.” But he and others are silent on the quid pro quo. The quid was Moscow’s agreement to swallow the bitter pill of a reunited Germany in NATO; the quo was a U.S. promise not to “leapfrog” NATO over Germany farther East. Washington welched on the deal. 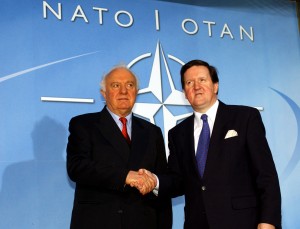 It began to unravel in October 1996 during the last weeks of President Bill Clinton’s campaign for re-election. Mr. Clinton bragged that he would welcome Poland, Hungary and the Czech Republic into NATO, explaining, “America truly is the world’s indispensable nation” (and, sotto voce, can do what it wants).

Those three countries joined NATO in 1999, and by April 2009, nine more became members, bringing the post-Cold War additions to 12, equal to the number of the original 12 NATO states. The additional nine included the former Baltic Republics that had been part of the USSR, but not Ukraine. NATO intentions, however, were made clear at its summit in Bucharest in April 2008, which formally declared, “Georgia and Ukraine will be in NATO.”

Even hawkish former American national security adviser Zbigniew Brzezinski now concedes, “It is reasonable for Russia to feel uncomfortable about the prospect” of Ukraine in NATO. And that is the nub of today’s crisis there, not the “chauvinistic fanaticism” Mr. Brzezinski attributes to Russian President Vladimir Putin.

The foundering of the unique opportunity in 1990 to create a lasting peace in what President George H. W. Bush called a “Europe whole and free” was a tragedy. The expansion of NATO to the east, especially the decision to bring in Georgia and Ukraine, led, among other things, to Georgian-Russian hostilities in August 2008 and now to the current violence in Ukraine.

The fact that the Shevardnadze-Baker agreement was not recorded in an official document has helped revisionists to create alternative history, but there is compelling evidence testifying to Washington’s reneging on key oral commitments to Moscow.

Then-U.S. Ambassador to the USSR Jack Matlock, who took part in both the Bush-Gorbachev early-December 1989 summit in Malta and the Shevardnadze-Baker discussions in early February 1990, told me, “The language used was absolute, and the entire negotiation was in the framework of a general agreement that there would be no use of force by the Soviets and no ‘taking advantage’ by the U.S. … I don’t see how anybody could view the subsequent expansion of NATO as anything but ‘taking advantage,’ particularly since, by then, Russia was hardly a credible threat.”

On Feb. 10, 1990, German Foreign Minister Hans-Dietrich Genscher told Shevardnadze, “For us, one thing is certain: NATO will not expand to the east.” Melvin Goodman, co-author of The Wars of Eduard Shevardnadze, has told me that, during an interview of Shevardnadze in March 1994, the former foreign minister said Mr. Baker had assured him that NATO “would not jump over” East Germany for new members.

Three months after the overthrow of Ukrainian President Viktor Yanukovych and installation of a pro-Western government in Kiev, Russian President Putin complained: “But tomorrow Ukraine might become a NATO member, and the day after tomorrow missile defense units of NATO could be deployed in this country.”

Mr. Putin keeps coming back specifically to “missile defense” in NATO countries, or adjacent waters. On April 17, he said the issue is “probably even more important than NATO’s eastward expansion. Incidentally, our decision on Crimea was partially prompted by this logic: If we don’t do anything, Ukraine will be drawn into NATO and NATO ships would dock in Sevastopol.”

President Putin added: “If these systems are deployed closer to our borders, our ground-based strategic missiles will be within their striking range.” Even Mr. Brzezinski might agree that “it is reasonable for Russia to feel uncomfortable” about NATO ships docking in Crimea. Among the chief reasons: The current version of the missile defense plan includes ship-borne systems.

In his book, Duty, former Defense Secretary Robert Gates notes that the Russians consider the latest plan even worse than earlier ones because it might eventually have capabilities against Russian ICBMs. He added dismissively, “Making the Russians happy wasn’t exactly on my to-do list.”

Ray McGovern was a CIA analyst for 27 years, serving as chief of the Soviet Foreign Policy Branch and then deputy national intelligence officer for Western Europe. Now retired, he co-founded Veteran Intelligence Professionals for Sanity (VIPS) in January, 2003. [This article previously appeared in the Baltimore Sun and is republished with the author’s permission.]

4 comments for “The Broken Promise to Shevardnadze”