Amid continued splurging on war with the U.S. government still far-and-away the world’s leader there are a few hopeful signs as common citizens learn from the likes of Gandhi and become more suspicious of advocates for violent conflict, writes Lawrence S. Wittner.

National officials certainly assume that war has a future. According to a report by the Stockholm International Peace Research Institute, world military expenditures totaled nearly $1.75 trillion in 2013.  Although, after accounting for inflation, this is a slight decrease over the preceding year, many countries increased their military spending significantly, including China, Russia, and Saudi Arabia.

Indeed, 23 countries doubled their military spending between 2004 and 2013. None, of course, came anywhere near to matching the military spending of the United States, which, at $640 billion, accounted for 37 percent of 2013’s global military expenditures.  Furthermore, all the nuclear weapons nations are currently “modernizing” their nuclear arsenals. 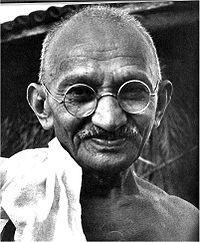 Meanwhile, countries are not only preparing for wars, but are fighting them — sometimes overtly (as in Syria, Iraq, and Afghanistan) and sometimes covertly (as in portions of Africa and the Middle East). Nevertheless, there are some reasons why war might actually be on the way out.

One reason, of course, is its vast destructiveness.  Over the past century, conventional wars (including two world wars) have slaughtered more than a hundred million people, crippled, blinded, or starved millions more, consumed vast stores of nonrenewable resources, and laid waste to large portions of the globe.

And this enormous level of death, misery, and ruin will almost certainly be surpassed by the results of a nuclear war, after which, as Nikita Khrushchev once reportedly commented, the living might envy the dead. After all, Hiroshima was annihilated with one atomic bomb. Today, some 16,400 nuclear weapons are in existence, and most of them are far more powerful than the bomb that obliterated that Japanese city.

Another reason that war has become exceptionally burdensome is its enormous cost. The United States is a very wealthy nation, but when it spends half of its annual tax-collected budget on the military, as it now does, it is almost inevitable that its education, health care, housing, parks and recreational facilities, and infrastructure will suffer.

That is what the AFL-CIO executive council – far from the most dovish institution in American life- concluded in 2011, when it declared:  “There is no way to fund what we must do as a nation without bringing our troops home from Iraq and Afghanistan. The militarization of our foreign policy has proven to be a costly mistake. It is time to invest at home.” Many Americans seem to agree.

Furthermore, a number of developments on the world scene have facilitated the abolition of war.  One of them is the rise of mass peace movements. Many centuries ago, religious groups and theologians began to criticize war on moral grounds, and non-sectarian peace organizations began to emerge in the early Nineteenth Century. Even though they never had an easy time of it in a world accustomed to war, these organizations became a very noticeable and, at times, powerful force in the Twentieth Century and beyond.

Drawing upon prominent figures like Albert Einstein and Bertrand Russell, sparking new thinking about international relations and world peace, and mobilizing millions of people against war, peace groups created a major social movement that government officials could not entirely ignore.

Another new development one originally proposed by peace organizations is the establishment of international institutions to prevent war. The vast destruction wrought by World War I provided a powerful incentive for Woodrow Wilson and other officials to organize the League of Nations to prevent further disasters.

Although the League proved too weak and nations too unwilling to limit their sovereignty for this goal to be accomplished, the enormous carnage and chaos of World War II led government officials to give world governance another try. The resulting institution, the United Nations, proved somewhat more successful than the League at averting war and resolving conflicts, but, like its predecessor, suffered from the fact that it remained weak while the ambitions of nations (and particularly those of the great powers) remained strong.

Even so, the United Nations now provides an important framework that can be strengthened to foster international law and the peaceful resolution of international disputes.

Yet another new factor on the world scene one also initiated by peace activists is the development of nonviolent resistance. As staunch humanitarians, peace activists had pacifist concerns and human rights concerns that sometimes pulled them in opposite directions for example, during the worldwide struggle against fascist aggression.

But what if it were possible to battle for human rights without employing violence? This became the basis for nonviolent resistance, which was not only utilized in dramatic campaigns led by Mohandas Gandhi and Martin Luther King, Jr., but in mass movements that, subsequently, have challenged and toppled governments. Indeed, nonviolent resistance has become a new, powerful, and more successful tool for people to drawn upon in conflicts without slaughtering one another.

In addition, the modern world has produced many other alternatives to mass violence. Why not expand international exchange and peace studies programs in the schools? Why not dispatch teams of psychologists, social workers, conflict resolution specialists, mediators, negotiators, and international law experts to conflict zones to work out settlements among the angry disputants? Why not provide adequate food, meaningful employment, education, and hospitals to poverty-stricken people around the world, thus undermining the desperation and instability that often lead to violence?

Wouldn’t the U.S. government be receiving a friendlier reception in many countries today if it had used the trillions of dollars it spent on war preparations and destruction to help build a more equitable, prosperous world?

Of course, this scenario might depend too much on the ability of people to employ reason in world affairs. Perhaps the rulers of nations, learning nothing since the time of Alexander the Great, will continue to mobilize their citizens for war until only small bands of miserable survivors roam a barren, charred, radioactive wasteland. But it’s also possible that people will finally acquire enough sense to alter their self-destructive behavior.

Lawrence Wittner (http://lawrenceswittner.com), syndicated by PeaceVoice, is Professor of History emeritus at SUNY/Albany. His latest book is What’s Going On at UAardvark?
(Solidarity Press), a satirical novel about campus life.