In theory, many people hail the idea of independent thinking and praise the courage of speaking truth to power. In practice, however, the pressure of “group think” and the penalties inflicted on dissidents usually force people into line even when they know better, as Lawrence Davidson notes.

World Wars I and II created watershed moments in the lives of Western intellectuals, defined here as those who are guided by their intellect and critical thinking and who understand various aspects of the world mainly through ideas and theories which they express through writing, teaching and other forms of public address.

Just how were they to respond to the call of patriotic duty that seduced the vast majority of citizens to support acts of mass slaughter? What constituted a proper response is often debated. How most of them did respond is a matter of historical record. 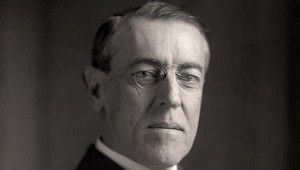 During the world wars most intellectuals on all sides of the conflicts uncritically lent their talents to their government’s war efforts. Some did so as propagandists and others as scientists. Some actually led their nations into the fray, as was the case with President Woodrow Wilson.

Wilson held a doctorate from Johns Hopkins University, had taught at Cornell, Bryn Mawr and Wesleyan, and became president of Princeton University. Eventually he was elected President of the United States and, having taken the nation to war, sanctioned the creation of a massive propaganda machine under the auspices of the “Committee on Public Information.” He also supported the passage of the Sedition Act of 1918 to suppress all anti-war sentiments.

Wilson never experienced combat, but another intellectual, the British poet Siegried Sassoon, did so in the trenches of the Western front. After this experience he wrote, “war is hell and those who initiate it are criminals.” No doubt that was his opinion of the intellectual President Woodrow Wilson.

In 1928, the French philosopher and literary critic Julien Benda published an important book, The Betrayal of the Intellectuals. In this work Benda asserted that it is the job of the intellectual to remain independent of his or her community’s ideologies and biases, be they political, religious or ethnic. Only by so doing could he or she defend the universal practices of tolerance and critical thinking that underpin civilization.

Not only were intellectuals to maintain their independence, but they were also obligated to analyze their community’s actions and, where necessary, call them into question.

However, as the memory of the intellectuals’ complicity in World War I faded, so did the memory of Benda’s standard of behavior. By World War II it held little power against the renewed demands of national governments for citizens to rally around the flag.

Thus, in that war, with even greater atrocities being committed, most intellectuals either supported the slaughter or remained silent. Some became fascists, others communists, and all too many once more lent their talents to propaganda machines and war industries in all the fighting states.

As a result, the debate over the proper role of the intellectual in relation to power and ideology continues to this day. It is not a question that needs a world war to be relevant. There are any number of ongoing situations where nationalism, ethnicity or religious views spark intolerance and violence. And with each of them the intellectuals, particularly those whose home states are involved, have to make the same age-old choice: Do they follow Woodrow Wilson’s path or that of Julian Benda?

Fate of the Jewish Intellectual

This problem has recently been raised in reference to the seemingly endless Palestinian-Israeli conflict. On April 14, Eva Illouz, a professor of sociology at Hebrew University, published an article in the Israeli newspaper Haaretz entitled, “Is It Possible to Be a Jewish Intellectual?”

In this piece, she sets forth two opposing positions: one is the Zionist/Israeli demand for the primacy of “ahavat Israel,” or the “love of the Jewish nation and people” – the claim that all Jews have a “duty of the heart” to be loyal to the “Jewish nation.” The other position is that of the lone intellectual (here her model is the philosopher Hannah Arendt), whose obligation is to maintain the “disinterested intelligence” necessary to, if you will, speak truth to power.

Illouz explains that Zionists have a “suspicion of critique” and use “the memorialization of the Shoah” (the Holocaust) and “ahavat Israel” to mute it, adding: “The imperative of solidarity brings with it the injunction to not oppose or express publicly disagreement with official Jewish bodies.”

It is within this context that she can ask if it is still possible to be a Jewish intellectual, at least as portrayed by Julien Benda. Illouz’s conclusion is that it has become exceedingly difficult to be so, particularly in the diaspora communities, where the demands for Jewish solidarity are particularly “brutal.”

Illouz is unhappy with this situation. While she feels the allure of “ahavat Israel,” she ultimately supports the position of the independent-mindedness of Benda’s thinker. She insists that the “contemporary Jewish intellectual has an urgent task to unveil the conditions under which Jewish solidarity should or should not be accepted, debunked or embraced. In the face of the ongoing, unrelenting injustices toward Palestinians and Arabs living in Israel, his/her moral duty is to let go, achingly, of that solidarity.”

While the portrayal of the intellectual as a thinker insisting on and practicing the right of critical thinking about society and its behavior is an ancient one (consider Socrates here), such behavior is not common in practice. This, in turn, calls Benda’s notion of a proper intellectual into question.

Thus, the description of an intellectual offered at the beginning of this essay (which is in line with common dictionary definitions) does not reference any particular direction of thought. For instance, in practice there is nothing that requires an intellectual to think about societal or government behaviors, much less take a critical public position on such matters.

And, no doubt, there are many very talented minds who, deeply involved in aesthetic matters or certain branches of scientific, linguistic, literary or other pursuits, do not involve themselves with issues of the use or abuse of power.

In addition, one might well be judged an intellectual and be a supporter or even a perpetrator of criminal policies and actions. Woodrow Wilson might fall within this category, as might Henry Kissinger, Condoleezza Rice and many others.

Indeed, from a historical perspective most people of high intellect have sought to serve power and not critique or question it. This is quite in line with the fact that most non-intellectuals accept the word of those in power as authoritative and true.

According to Eva Illouz, this reflects the primacy of group solidarity over truth. She is correct in this judgment. That, no doubt, is why the independent-minded, outspoken intellectuals demanding moral integrity and responsibility from those in power are so rare, be they Jewish or gentile.

12 comments for “Reasons for Intellectual Conformity”