Exclusive: Voters in two eastern Ukrainian provinces showed strong support for secession from the coup regime in Kiev, but the U.S. State Department and other regime supporters reject the outcome and vow to press ahead with a special presidential vote on May 25, Robert Parry reports.

Despite many procedural shortcomings, the referenda for secession in eastern Ukraine confront the post-coup regime in Kiev and its Western backers with a growing problem, the realization that major ethnic Russian population centers near the Russian border reject the new right-wing national leaders and favor independence.

The U.S. State Department and the mainstream U.S. press will, of course, dismiss the significance of the voting in the provinces of Donetsk and Luhansk because of the chaotic circumstances in the region, but the seemingly high turnout and overwhelming vote for secession indicate that there is widespread popular support for the armed resistance to the Kiev authorities who took power in February after the violent overthrow of elected President Viktor Yanukovych, whose political base was in the east. 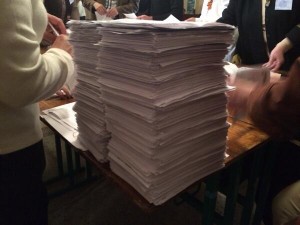 A pile of “yes” votes at a Donetsk polling place favoring secession in the referendum on May 11, 2014.

Popular support for the anti-regime rebels was not entirely clear despite the apparent public tolerance of the separatist forces that seized control of about a dozen towns and cities in the industrial region known as the Donbass. But now, even the New York Times, which has been an unabashed supporter of the Kiev regime, acknowledged that “the referendums demonstrated that there was substantial popular support for the pro-Russian separatists in some areas.”

When the rebellion began, the Kiev regime called the separatists “terrorists” who were being manipulated by Moscow and would be soon crushed by Ukrainian troops. But hundreds of civilians in the east set up roadblocks, causing many soldiers to refuse to fire on their countrymen. Some soldiers even abandoned their armored personnel carriers.

That led to the dispatch of new special units drawn from the neo-Nazi militias that spearheaded the Feb. 22 coup against Yanukovych and now have been incorporated into the National Guard.

Though the introduction of these special units have led to dozens of deaths among the ethnic Russian resistance including at the grisly fire in Odessa on May 2 the violence has done little to cow the people of the rebellious region who turned out in large numbers on Sunday despite two attacks marring the mostly celebratory air at the referenda.

One of Kiev’s special units, known as the Dnepr Brigade, attacked a polling place at the City Hall in the town of Krasnoarmiysk on Sunday afternoon, causing the vote organizers to grab ballot boxes and run. When a civilian tried to block other soldiers from entering the building he was shot dead, according to an account in the New York Times.

Two other civilians were wounded in the village of Baranikovka in the Luhansk region when, according to the Interfax news agency, Ukrainian soldiers fired into a crowd blocking National Guard armored vehicles.

Despite Sunday’s strong expression of public support for secession, State Department spokeswoman Jen Psaki called the voting “illegal under Ukrainian law, and an attempt to create further division and disorder.” She vowed that the United States would not recognize the results.

The next step for the State Department will be to promote a special Ukrainian presidential election called by the Kiev regime for May 25, with only regime supporters being given any chance of victory after major candidates representing the anti-coup east withdrew from the race, citing threats of arrest and physical attacks.

Whereas State Department officials dismissed the legitimacy of Sunday’s referenda, in part, because of eastern Ukraine’s violence and disorder, that argument is sure to disappear in the run-up to the May 25 election.

To guarantee that the West’s news media is reading from the right script, U.S. Under Secretary of State for Public Diplomacy Richard Stengel left for Kiev and other European capitals “to stress the need for greater regional engagement to support Ukraine’s upcoming May 25 elections,” the State Department announced, saying Stengel would “push back against efforts to delegitimize [the elections] and ensure that all Ukrainians are given the chance to decide their future for themselves.”

During a stop in Brussels, Belgium, “Under Secretary Stengel will engage with a wide spectrum of European media and think tank leaders to discuss the current crisis in Ukraine; highlight U.S support for the territorial integrity of Ukraine; emphasize the importance of ensuring Ukraine’s upcoming elections are free, fair and transparent; and reaffirm the value America places on the Transatlantic partnership,” a State Department release said.

Stengel is the same official who on April 29 issued a sloppily prepared “Dipnote” that made broad-brush criticisms of RT’s content, accusing the Russian network of painting “a dangerous and false picture of Ukraine’s legitimate government.” But Stengel’s commentary failed to include citations to the offending articles and also revealed a stunning ignorance of the events surrounding the Ukraine crisis. [See Consortiumnews.com’s “Who’s the Propagandist, US or RT?”]

During my days in the 1980s as a reporter for the Associated Press and Newsweek when the Reagan administration began emphasizing “public diplomacy” by setting up special PD offices we would often refer to them as sources of “propaganda and disinformation.” Three decades later, it doesn’t seem that much has changed.

← Make Sure Consortiumnews Survives!
The Limits of US Military Power →