The U.S. Supreme Court’s 5-4 decision to remove limits on how much a person can donate each election cycle represents another giant step toward giving the 1 percent out-sized control of the U.S. political process, as Public Citizen President Robert Weissman told Dennis J Bernstein.

To U.S. Supreme Court Chief Justice John Roberts and the other four Republican justices, the right of wealthy Americans to give maximum donations to as many political candidates as they wish topped the right of average Americans not to have their voices drowned out by the influence of money.

So, on Wednesday, the Court voted 5-4 to overturn federal law setting caps on how much a person can give in each election cycle, a decision that the reform group Public Citizen called “a devastating blow at the very foundation of our democracy.” Dennis J Bernstein discussed the ruling with Public Citizen president Robert Weissman. 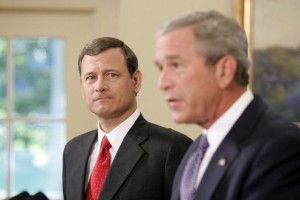 John Roberts at the Sept. 5, 2005, announcement at which President George W. Bush nominated Roberts to be Chief Justice of the U.S. Supreme Court. (White House photo by Paul Morse)

DB: Let’s begin by explaining exactly what was decided [by the U.S. Supreme Court on Wednesday].

RW: Well, the short version of what was decided is that the super-rich, according to the five-vote majority of the Supreme Court, have a constitutional right to spend at least $5.9 million in direct donations to candidates, parties and political committees every two years. That is in place of the current limit of around $123,000.

DB: I want to ask you to talk a little bit more, in detail, about the logic. What was said [in the majority’s decision] and the logic of the decision coming out of the court. What are they saying? Why is this a move towards “democracy”?

And if you say okay, well, what does that mean? Then they can give the maximum to all of them, that number $123,000, magically turns into $5.9 million. And there might be some impediment to doing that if you had to write, if you were a rich enough person to make that level of donation, you had to write, you know, 435 checks to candidates for the House of Representatives in the primary, and 435 checks in the general election.

The logic of the court, as I call it, well there’s a First Amendment right, a speech right for people to contribute as much as they want and, so again, the question further is what is the logic there.  What they are really saying is the right to give money deserves the same kind of protection, more or less, as the basic right to speech.

And then you say is there an offsetting value where we should weigh against that, that would justify restrictions on how much a person can give in the aggregate? And the answer was, well, the only thing that we look at is whether this might facilitate quid quo pro corruption meaning will it facilitate illegal bribery or the appearance of illegal bribery? And the answer is, it actually will, but the court says no, it won’t because it actually going to authorize illegal bribery, and therefore there’s no countervailing public interest. So, if you ask the question “Well, what was the logic of the court?” That’s how it goes.

Now, there aren’t very many people who think that way. Unfortunately five of the very few people who do, were able to make the decision today. I think regular people would say “You’re talking about the purported rights of a few hundred people as against the rights of the rest of us to have a functioning democracy. That there will be a huge corruption as a result of this, even worse than we already have post-Citizens United.”

Because it’s a whole new form of giving available now to the super-rich. There’s going to be worse corruption, worse tilting of the playing field in favor of the rich, less political equality. In fact, less real political speech because the rest of us who aren’t able to amplify our voices by giving $5.9 million dollars in a single check, or two checks, are going to be shut out.

DB: Alright, and just to be clear, in terms of this $5.9 million, is it a public donation or can they do this in private and not tell anybody?

RW: These donations will be disclosed. This will not increase the dark money that we’ve seen after Citizens United. There will be a different channel of giving. That dark money is all going to outside organizations that don’t have to report their donors. This money is going to go directly to candidates, directly to Republican or Democratic party committees, directly to political action committees that are required to disclose their major donors.

DB: Alright, now just say a little bit more about how this is I don’t know if this is right but sort of Citizens United on steroids. Explain how this moves the game with a little more detail.

RW: I think that’s a reasonable characterization of this decision. It’s certainly at that magnitude of Citizens United. So one way to think about Citizens United was it established the rights of corporations. And this is really a decision about the rights of the super-rich. And I can’t emphasize enough that we’re talking about a very, very small number of people who are going to seriously benefit from this decision, in terms of the amount of money that’s going to go in.

Citizens United enabled this unlimited spending by outside organizations that are supposedly not coordinated with candidates. There’s a lot of wink, wink, nod, nod kind of coordination that does go on. But still the money is outside of the direct control of the candidates. Now, that’s got some upsides for the candidates particularly in enabling massive and overwhelming spending on negative, attack advertising. But it’s got a lot of downsides, too, for the candidates because they aren’t able to exert the same kind of control as if the money is in their own coffers.

So this is going to now enable massive increases in the amount of money that goes directly to the candidates. And there will be, I think, a lot of influence on the broad number of beneficiary candidates who get this new money, but the real nexus of influence is going to be between these super donors and the top political leaders and party leaders who are going to be soliciting the giant checks. These are going to be the most important people, the most powerful people in politics. They are going to have a new kind of dependence to and allegiance to the super-rich donors.

DB: Let me ask you to step back a little bit and talk about this in the context of one person, one vote. There’s always been a big to-do about voter fraud, making sure things are clean and done well. But this really changes the whole nature of voting in this country or solidifies a different way of conducting what is continued to be called a democracy.

RW: If you step back from this vision and look at what the Supreme Court has done in the last several years on the voting rights side, particularly with the recent Shelby County decision, where they eviscerated crucial provisions of the Voting Rights Act, the court is making it harder for people to vote, especially people of color, low-income people, making it harder for people to vote, and enabling state officials to make it more difficult for people to vote, that’s on the one hand. And then on the other hand, they are empowering the super-rich and corporations to dominate the election process.

Now part of what they are doing is spending huge amounts of money on negative ads that are intended to deter people from voting. But more generally, they are trying to take control of the electoral process through this expenditure, through these massive expenditures. So it’s kind of a squeeze, from both sides, on electoral democracy. And, you have to say, electoral democracy, at this point, is screaming. I mean this is a really dire situation that’s going to call for a very dramatic response from the American people.

I think there’s no doubt for us after Citizens United about the need for a constitutional amendment to both overturn that decision and other Supreme Court decisions to really restore the functioning of our democracy. But for those who did have doubts about that, I think after today it’s crystal clear that we just can’t have a functioning democracy where these kinds of decisions, where these massive floods from different sources now, of super-rich and corporate money are coming to the electoral process, and just overwhelming what is supposed to be a one person, one vote democratic system.

DB:  And, finally, it certainly is, isn’t it, a stunning turnaround in the things that began to happen after the revelations around Watergate and dirty money. It looked like there was going to be some slow movement towards real campaign finance reform and that is all gone, wiped out.

RW: That’s right. I mean we had a pretty rapid reversal of the momentum post-Watergate with the Buckley decision and then also other decisions that established corporate rights to spend, at least in the area first of election referendum, and then increasingly in other areas. So the court took a bad turn starting in 1976, but really in the last several years, this Roberts court is so hostile to the most commonsense kinds of restraints on campaign spending, that it has become very difficult to talk about reform absent a constitutional amendment.

There are small reforms that one might do to try to mitigate some of the harms of [Wednesday’s] decision and we’re going to aggressively pursue those, as will others. But those are so inadequate at this point because the court has created a jurisprudence that makes regulators contort so much to try to comply that it just can’t do things. So that’s going to be true for both the Federal Election Commission and for Congress.

We really have to sweep them away which is why it’s so important that there’s already been this really fast-growing grassroots movement for a constitutional amendment that I think now is going to pick up enormous steam.  We’ve got 38 states involved in this on the same day and I think that is both indicative of how strong the movement has become in the last four years and how much stronger it’s going to grow in the days, weeks and months ahead. We have a lot of work to do. And we don’t have any choice but to do it.

DB: And I must ask you, what about the politics? Is there any indication that this decision coming right before the mid-term elections is in any way going to help one side or the other?

As soon as we get poll data on this decision, I’m sure people just having commonsense are going to oppose this as well. And, again, it’s going to be across party lines. The trick is going to be both to mobilize people and convert the public anger about this into meaningful action by our elected representatives who are part of this system that we’re trying to reform.

← What Kind of One-State Solution
The Perception Management Priority →