Leading political prognosticators see the Republicans winning total control of the U.S. Congress this fall, meaning that President Obama’s political agenda would be effectively finished. But will this bleak prospect finally force Democrats to fight back, wonders Beverly Bandler.

The Democrats are facing a tough political map in their fight to keep control of the U.S. Senate in 2014. Most of the states that will be casting ballots for the Senate in 2014 are Republican leaning; seven of the 21 Democratic-held seats are in states carried by Republican presidential nominee Mitt Romney in 2012, while just one of the 15 contested Republican seats is in a state won by President Barack Obama.

Also, with the exception of three Senate races to replace senators who died or resigned, the seats in play this year were last contested in 2008, “an extraordinarily strong year for Democrats,” notes the respected political prognosticator Nate Silver. 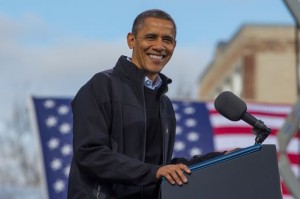 In July 2013, Silver forecast that the race for Senate control was a toss-up, but his most recent forecast on March 23 stated, “We think the Republicans are now slight favorites to win at least six seats and capture the chamber.”

The Democrats’ position has deteriorated somewhat since last summer, with President Obama’s approval ratings down to 42 or 43 percent from an average of about 45 percent before, Silver said. Furthermore, as compared with 2010 or 2012, it has been suggested that the GOP has done a better job of recruiting credible candidates.

Silver said Democrat-held seats likely to be picked up by Republicans are in West Virginia, South Dakota, Montana and Arkansas, with Republicans then having to win just two toss-up races in Alaska, North Carolina or Michigan, or pull off a modest upset in a state like New Hampshire. They’ll also have to avoid losses in Georgia and Kentucky, he said.

Democrats have challenged Silver’s prediction. Guy Cecil, the executive director of the Democratic Senatorial Campaign Committee, issued a rebuttal on Monday, saying: “Silver was wrong in 2012” when he also projected a likely Republican Senate takeover.

“In fact, in August of 2012 Silver forecast a 61 percent likelihood that Republicans would pick up enough seats to claim the majority,” Cecil said. “Three months later, Democrats went on to win 55 seats.”

But Silver is not alone in seeing the GOP advantage. “Senate Republicans seem to have a strong chance at gaining the six seats they need for a majority in the chamber,” according to political professor John J. Pitney Jr., “but their task will be tougher if they drop any of the seats that they already have.”

Late last year, political analyst Charlie Cook said “Democrats need to win 3 of the 7 most competitive Senate races to hold the chamber,” while “Republicans would need to win 5 of these 7 seats including unseating 3 Democrats to win a 51 seat majority on the Senate. Six of these seven states were won by Romney in 2012 (AK, AR, LA, NC, GA, KY), and one was won by Obama (MI).”

But control of the Senate would likely be in play again in 2016, a presidential election year, Cook and other observers believe.

The Senate “will be very closely divided after the 2014 election and could swing to the other side in 2014 and again in 2016.” Cook concluded this March. “It’s hard to see how the GOP doesn’t score a net gain of at least four seats, shaving the Democratic majority to 51 seats. At the other extreme, it would not be impossible for Republicans to score a net gain of seven or eight seats, giving the GOP a 52-48 majority, or even one of 53-47.”

Cook believes, “The odds are high after this election that the majority party will have 53 seats or less, but it is important to remember that in 2016, the shoe will be on the other foot in terms of seat exposure. This year, Democrats have 21 seats up, compared with 15 for Republicans; in 2016, the GOP will have 24 seats up, while Democrats will only have 10. It’s not implausible that Republicans could pick up a majority in 2014 only to lose it again in 2016, with the Senate teetering on the edge for the foreseeable future.”

The view of Kyle Kondik of Sabato’s Crystal Ball is that 16 races are potentially competitive at the moment. “Of those races, 14 are currently held by Democrats, and just two are held by Republicans,” Kondik said. “Nearly all the competitive seats this cycle are in places where Democrats are playing defense.”

The chief Republican worry is that some of the GOP primaries will produce Tea Party nominees who could be weak general election candidates, as has happened in the past two election cycles. These GOP primaries have been identified as key to watch: Georgia, Iowa, Colorado, Kentucky, Mississippi, Texas, Tennessee and South Carolina.

But it appears safe to say even months before the midterm elections that for Americans the days a half century ago when political scientist Clinton Rossiter could boast that America’s party system reflected genius and that U.S. political parties were “creatures of compromise, coalitions of interest in which principle is muted and often even silenced” are long gone.

Congressional scholars Thomas Mann and Norman Ornstein offered a worrisome assessment in 2012: “One of these parties has taken on the role of insurgent outlier; the Republicans have become ideologically extreme, scornful of compromise, and ardently opposed to the established social and economic policy regime.”

Journalist Robert Parry, the editor of ConsortiumNews, has suggested that: “We’ve allowed the madness to dominate for three decades. Now, it may be impossible to govern responsibly with such a huge apparatus behind the madness.”

Perhaps the only way to reverse the current trends is for Democrats to get out of their defensive crouch and stop being so averse to confrontation. Yet, even if they go on the offensive and marshal the evidence to support their positions, the odds may be against them, given the vast sums of money available to Republicans and the Right.

Political observer Bill Moyers calls the current struggle against extremist authoritarians masquerading as conservatives “the fight of our lives.” But informed and decent American voters still have an opportunity to make a difference a vote is a voice.

The hard reality is that we are in a fight to save our representative democracy and we must face battle after battle, with 2014 midterms the next one looming.

11 comments for “GOP Looks to Take the Senate”