Neocons hoped the Ukraine-Crimea crisis, which they encouraged, would drive a spike into the Obama-Putin collaboration and restore neocon dreams of a U.S. military attack on Iran. But the scheme could instead push Russia and Iran closer together, as ex-CIA analyst Paul R. Pillar explains.

The crisis over Crimea has naturally raised questions about possible effects of this disturbance on other issues and specifically ones that depend on U.S.-Russian cooperation. This includes the negotiations on Iran’s nuclear program.

Russian deputy foreign minister Sergei Ryabkov raised eyebrows with a comment this week about how dealings with Iran may be an area where his government would look for possible options in responding to Western sanctions against Russia. 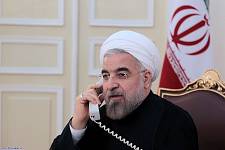 Iran’s President Hassan Rouhani talks by telephone with Russian President Vladimir Putin on Nov. 18, 2013, discussing developments in the talks between Tehran and world powers as well as ways to end the bloodshed in Syria. (Iranian government photo)

So far there is no indication of a change in Russian policies regarding Iran. This is not surprising. Russia is geographically closer to Iran than are any of its negotiating partners in the Vienna talks, and if there were to be any threat from an Iranian nuclear weapon, prevention of which is a main purpose of the negotiations, Russia would be at least as vulnerable as any of the others.

Putin’s government also can openly accept that it would be in Russia’s interests as well as Iran’s for the two countries to have a full and normal relationship. Putin can do so because unlike in the United States, whose interests also would be well served by a full and normal relationship of its own with Iran, he does not have strong domestic political elements dedicated to keeping relations with Iran perpetually bad.

Moscow does have, however, an option for using the Iran issue to show displeasure with the West without harming (and maybe even helping) the prospects for reaching an agreement with Iran. That option would be to reach new trade deals, either civilian or military, with Tehran. Besides being in Russia’s economic interests, such transactions would be well-suited symbolically as an anti-sanctions gesture in the face of sanctions against Russia itself.

If Russia were to move in this direction, there of course would be in the United States moans of disapproval and dismay about how the anti-Iran sanctions regime was in danger of falling apart. Such dismay would come partly from those who honestly but mistakenly believe that getting the desired concessions out of Tehran is all a matter of pressuring Iran, and that more pressure through economic sanctions is always good and less pressure is always bad.

The mistaken belief comes from apparent ignorance of a historical record that does not really support the catechism that “sanctions brought Iran to the table.” It also comes from failure to understand that the other side’s confidence that pressure will stop if desired concessions are made is just as important as the belief that pressure won’t stop if the concessions aren’t made.

Expressions of disapproval and dismay also would come from those who oppose any agreement with Iran and precisely for that reason have been pushing for piling on still more sanctions at inopportune times. Expressions from that quarter, such as from Mark Dubowitz of the Foundation for Defense of Democracies, have already begun over the mere possibility of what the Russians might do.

Those who want, for whatever reason, to keep harsh sanctions against Iran in place for now can relax. The big, debilitating sanctions involving banking and oil are still in place, and U.S. actions have far more to do with keeping them in place than anything Russia can do unilaterally. The Treasury Department is very good at the sanctions enforcement business.

It is so scarily good that even relaxations of the sanctions regime on the periphery have little practical effect because anybody who might want to take advantage of such relaxation usually has no way of moving the necessary money around if they cannot persuade any banks, fearful of being penalized by Treasury, to handle the transactions. This is probably true, for example, of a recently issued general license to permit academic exchanges between Iran and the United States.

Actually, some opening up of commerce with Iran, whether at the initiative of the Russians or of someone else, would probably help the negotiations at this point. What is most needed now to sustain Iranian cooperation and seriousness is not still more sanctions; if that were true we would have seen results long ago.

What is needed more is to persuade Iranians who matter, and that includes more than those at the negotiating table, that all those sanctions really were for the declared purpose of eliciting Iranian agreement to arrangements that preclude an Iranian nuclear weapon. That is needed because the Iranians have been given much reason to be skeptical about whether that is the true purpose of the sanctions.

And it is needed because, after the Iranians made major concessions in the preliminary agreement reached last November in return for only meager sanctions relief, they are still waiting for proof that their cooperation is buying the economic relief they seek.

The administration of President Hassan Rouhani has much at stake with the economic consequences of the nuclear issue. He was elected last year by people who placed in him high hopes for economic improvement. He has managed so far to clean up somewhat the problems left by his predecessor, which are due partly to economic mismanagement as well as to the sanctions.

But Rouhani needs to show a lot more improvement, and fairly soon, or else he will be a lame duck for the rest of his term. He and his foreign minister, Javad Zarif, are as good as it’s going to get as far as Iranian interlocutors for the West are concerned. If they come to be seen as failures the alternatives will be worse.

Supreme leader Ali Khamenei has a different perspective and different position but has to deal at one remove with some of the same realities. His views toward the West are far more unreconstructed than Rouhani’s and in some respects even despicable. His very pessimistic pronouncements about the negotiations are partly an effort to separate himself from possible failure but also partly a genuinely strong suspicion about Western and especially U.S. motives.

Khamenei is not a dictator, however, and that is part of what it means to have real politics in Tehran. He cannot ignore the economic problems and the views about them that put Rouhani into office. He can talk about self-reliance and say sanctions be damned, but he surely knows that such lectures are an insufficient palliative.

If the negotiations were to fail, tragically, given what has been achieved so far, it would not be because of anything the Russians, annoyed about reactions to Crimea, might do, and it won’t be because of a weakening of sanctions. It would be because of the efforts of hardliners elsewhere, including in the United States as well as Iran, to kill the prospects for an agreement, with the hardliners in each place playing off each other.

More specifically, it might be that given the influence of the hardliners, the U.S. position in particular would remain too inflexible to make it possible for the Iranians to make further concessions. One Western official summed up well what is most needed now in the negotiations:

“The greater power has to bend. We must take steps that are large enough to convince both skeptics and pro-engagement camps in Tehran that we’re serious. It’s alarming that this seems out of our ability today.”

← Debating Secrecy vs. a Free Press
Changing Israel from Without →

3 comments for “Russia’s Countermove in Iran”