From the Archive: The death of Iran-Contra special prosecutor Lawrence Walsh on Wednesday at the age of 102 marked the passing of what is now rare in the American Establishment, a person who courageously fought for a truthful historical record, as Robert Parry explained in this 1997 review of Walsh’s memoir, Firewall.

By Robert Parry (First published in 1997)

In crucial ways, Watergate, the signature scandal of the 1970s, and Iran-Contra, the signature scandal of the 1980s, were opposites. Watergate showed how the constitutional institutions of American democracy — the Congress, the courts and the press — could check a gross abuse of power by the Executive, albeit imperfectly. A short dozen years later, the Iran-Contra scandal demonstrated how those same institutions had ceased to protect the nation from serious White House wrongdoing.

Watergate had been part of a brief national awakening which exposed Cold War abuses — presidential crimes, lies about the Vietnam War and assassination plots hatched at the CIA. The Iran-Contra cover-up marked the restoration of a Cold War status quo in which crimes, both domestic and international, could be committed by the Executive while the Congress and the press looked the other way. 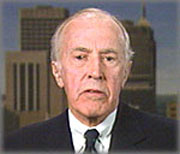 That Iran-Contra reality, however, is still little understood for what it actually was: a victory of weakness and deceit over integrity and courage. On one front, the Washington media wants to perpetuate the myth that it remains the heroic Watergate press corps of All the President’s Men. On another, the national Democratic establishment wants to forget how it crumbled in the face of pressures from the Reagan-Bush administrations. And, of course, the Republicans want to protect the legacy of their last two presidents.

Those combined interests led to very few favorable reviews of a memoir by a man who put himself in the way of that cover-up — Iran-Contra independent counsel Lawrence Walsh. In Firewall: The Iran-Contra Conspiracy and Cover-up, Walsh details his six-year battle to break through the “firewall” that White House officials built around President Ronald Reagan and Vice President George H.W. Bush after the Iran-Contra scandal exploded in November 1986.

For Walsh, a lifelong Republican who shared the foreign policy views of the Reagan administration, the Iran-Contra experience was a life-changing one, as his investigation penetrated one wall of lies only to be confronted with another and another — and not just lies from White House aide Oliver North and his lower-level cohorts but lies from nearly every senior administration official who spoke with investigators.

According to Firewall, the cover-up conspiracy took formal shape at a meeting of Reagan and his top advisers in the Situation Room at the White House on Nov. 24, 1986. The meeting’s principal point of concern was how to handle the troublesome fact that Reagan had approved illegal arms sales to Iran in fall 1985, before any covert-action finding had been signed. The act was a clear felony — a violation of the Arms Export Control Act — and possibly an impeachable offense.

Though virtually everyone at the meeting knew that Reagan had approved those shipments through Israel, Attorney General Edwin Meese announced what would become the cover story. According to Walsh’s narrative, Meese “told the group that although [NSC adviser Robert] McFarlane had informed [Secretary of State George] Shultz of the planned shipment, McFarlane had not informed the president. …

When Shultz returned to the State Department, he dictated a note to his aide, Charles Hill, who wrote down that Reagan’s men were “rearranging the record.” They were trying to protect the president through a “carefully thought out strategy” that would “blame it on Bud” McFarlane.

As part of that strategy, virtually all of Reagan’s top advisers, including Shultz, gave false and misleading testimony to Congress and prosecutors. Their accounts essentially blamed the illegalities on Marine Lt. Col. Oliver North and his bosses at the National Security Council, McFarlane and Poindexter. Pretty much everyone else — at the CIA, Defense Department, the Vice President’s Office and the White House — claimed ignorance.

Even though Oliver North correctly testified in 1987 that he was the “fall guy” in this implausible scenario, the Democrats and much of the press corps still fell for it. There was a clicking of wine glasses around Official Washington as the “men of zeal” cover story was enshrined as the official history of the Iran-Contra affair. A painful Watergate-style impeachment battle had been averted.

The story might have stopped there but for the work of Walsh and his small team of lawyers. Yet Walsh’s investigation was hampered from the start by congressional haste and from hostility among key elements of the media. Congress was so ready to accept the theory of a rogue operation that it rushed ahead with televised hearings designed to make North and his NSC superiors, McFarlane and Poindexter, the primary culprits. Without even questioning North ahead of time, the Iran-Contra committee granted the charismatic Marine officer and his pipe-smoking boss, Poindexter, limited immunity.

Three years later, that immunity came back to haunt Walsh’s hard-won convictions of North and Poindexter. Conservative judges on the federal appeals court, particularly Reagan loyalists Laurence Silberman and David Sentelle, exploited the immunity opening to reverse North’s conviction. Sentelle, a protege of Sen. Jesse Helms, R-N.C., also joined in the decision to wipe out Poindexter’s conviction. [After that, Sentelle took over the three-judge panel, which oversaw independent counsels, including Walsh.]

In Firewall, Walsh described the GOP majority on the U.S. Appeals Court for the District of Columbia as “a powerful band of Republican appointees [who] waited like the strategic reserves of an embattled army, … a force cloaked in the black robes of those dedicated to defining and preserving the rule of law.”

Still, despite the legal and political obstacles, Walsh’s investigation broke through the White House cover-up in 1991-92. Almost by accident, as Walsh’s staff was double-checking some long-standing document requests, the lawyers discovered hidden notes belonging to Weinberger and other senior officials. The notes made clear that there was widespread knowledge of the 1985 illegal shipments to Iran and that a major cover-up had been orchestrated by the Reagan and Bush administrations.

The belated discovery led to indictments against senior CIA officials and Weinberger. Congressional Republicans, led by Sen. Bob Dole, R-Kansas, reacted by angrily denouncing Walsh and calling for an end to his investigation. The Washington press corps also had grown hostile, complaining that Walsh’s probe had taken too long and had cost too much.

The conservative Washington Times and the Wall Street Journal’s editorial page fired near-daily barrages at Walsh often over trivial matters, such as first-class air fare and room-service meals. Key columnists and editorial writers for The Washington Post and The New York Times — along with television pundits David Brinkley and Christopher Matthews — joined in the Walsh bashings. Walsh was mocked as a modern-day Captain Ahab.

In his book, however, Walsh compared his trying experience to another maritime classic, Ernest Hemingway’s Old Man and the Sea. In that story, an aging fisherman hooks a giant marlin and, after a long battle, secures the fish to the side of his boat. On the way back to port, the marlin is attacked by sharks that devour its flesh and deny the fisherman his prize. “As the independent counsel, I sometimes felt like the old man,” Walsh wrote, “more often, I felt like the marlin.”

More seriously, the congressional and media attacks effectively limited Walsh’s ability to pursue what appeared to be other false statements by senior administration officials. Those perjury inquiries could have unraveled other major national-security mysteries of the 1980s and helped correct the history of the era. But Walsh could not overcome the pack-like hostility of Official Washington.

For instance, the Walsh team had strong suspicions that Bush’s national security adviser, ex-CIA officer Donald Gregg, had lied when he testified that he was unaware of North’s Contra resupply operation, although Gregg’s close friend, Felix Rodriguez, was working with North in Central America and called Gregg after each Contra delivery.

There already had been problems with Gregg’s story, including the discovery of a vice presidential office memo describing a planned meeting with Rodriguez about “resupply of the contras.” Gregg bizarrely explained the memo away as a typo that should have read, “resupply of the copters.”

In Firewall, Walsh disclosed that Gregg’s stonewall experienced another crack when Col. James Steele, U.S. military adviser to El Salvador, flunked a polygraph test when he denied his own role in shipping weapons to the Contras. Confronted with those results and incriminating notes from North’s diaries, “Steele admitted not only his participation in the arms deliveries but also his early discussion of these activities with Donald Gregg,” Walsh wrote.

Despite the doubts about Gregg’s veracity, Walsh felt compelled to set aside those allegations as he struggled to finish several pending perjury cases against Weinberger and CIA officials, Clair George and Duane Clarridge. As those cases moved haltingly forward, anti-Walsh attacks multiplied in Congress and in the Washington media.

The Republican independent counsel also infuriated the GOP when he submitted a second indictment of Weinberger on the Friday before the 1992 elections. The indictment contained documents revealing that President Bush had been lying for years with his claim that he was “out of the loop” on the Iran-Contra decisions. The ensuing furor dominated the last several days of the campaign and sealed Bush’s defeat at the hands of Bill Clinton.

Walsh had discovered, too, that Bush had withheld his own notes about the Iran-Contra Affair, a discovery that elevated the President to a possible criminal subject of the investigation. But Bush had one more weapon in his arsenal. On Christmas Eve 1992, Bush destroyed the Iran-Contra probe once and for all by pardoning Weinberger and five other convicted or indicted defendants.

“George Bush’s misuse of the pardon power made the cover-up complete,” Walsh wrote. “What set Iran-contra apart from previous political scandals was the fact that a cover-up engineered in the White House of one president and completed by his successor prevented the rule of law from being applied to the perpetrators of criminal activity of constitutional dimension.”

But the cover-up likely could not have worked if the other institutions of Washington — Congress, the courts and the press — had not helped. Those institutions aided and abetted the White House both directly, through decisions that undermined the cases or reversed convictions, or indirectly, through incessant heckling of Walsh’s investigators over trivial complaints.

Like the cover-up that bedeviled Lawrence Walsh, the historic reversal for America — from the constitutional protections of Watergate to the flouting of law in Iran-Contra — was complete.