U.S. mainstream news media, which routinely shuts out journalists and analysts who question the righteousness of American interventionism, is now targeting the presence of RT as a Russian-financed alternative news source in Washington, writes Danny Schechter.

James Kirchick is just the sort of neutral reporter the Daily Beast would assign to report on the ideological controversy surrounding the Russian-backed RT-TV Channel’s coverage of the crisis in the Ukraine. The Beast lives up to its name by sending a hardcore polemical ideologue to uncover what he predictably labels as ideological media bias.

Kirchick is a veteran of the anti-communist wars, now revived as the anti-Putin wars, not some neutral journo crusading for democracy. According to Wikipedia, he is a fellow with the Foundation for Defense of Democracies in Washington, prior to this he was writer-at-large for Radio Free Europe/Radio Liberty. He is a graduate of the New Republic and Murdoch’s Weekly Standard and writes for Azure, a magazine that described itself as pro-Zionist and free market. 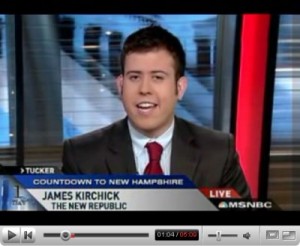 Okay, just so we know who are dealing with here. And now, to bolster his “credibility” he presents himself as a victim in his latest article that exposes himself, far more than his target, asserting that his rights as a journalist were somehow compromised because of a gutsy quest for truth. Here’s his exhibit:

â€¢The Lead: “That’s what happens, it seems, when you ask some simple questions outside RT’s Washington headquarters.”

â€¢The Polemic: “What would possess an American to work for a Russian propaganda outlet, especially now that the world is on the brink of a potential war in Eastern Europe? I asked that question of about two dozen people coming in and out of the Washington headquarters of RT, the Kremlin-funded television network that has become infamous in recent days for whitewashing Vladimir Putin’s invasion of Ukraine. No one would answer me directly. Instead, RT called the local cops on me.”

Kirchik’s first story in his jihad against RT was to interview Anchor Liz Wahl who resigned flamboyantly on the air denouncing the channel she worked for and making her an instant shero among Russia-bashers the world over. Wahl offered up sweet innocence laced with the veneer of red, white and blue patriotism.

“I’m very lucky to have grown up here in the United States,” she said. “I’m the daughter of a veteran. My partner is a physician at a military base where he sees every day the first-hand accounts of the ultimate prices that people pay for this country. And that is why personally I cannot be part of a network that whitewashes the actions of Putin. I am proud to be an American and believe in disseminating the truth and that is why after this newscast I’m resigning.”

Cue the National Anthem! Funny, after her declaration of independence and stagy pledge to quit was broadcast on a network that could have cut her off none other than former Rep. Ron Paul, whose interview with Wahl she claimed RT had censored, denied it, saying, “I don’t think it was slanted in any way.”

Earlier, another RT on-air personality, Abby Martin, also denounced Putin’s Ukraine policy on the air but was not fired and did not quit. Later, she turned up debating the fairness and objectivity of most American TV with Piers Morgan on CNN, a network considered by some critics as an “American propaganda outlet.”

In an article about Martin in National Journal, Lucia Graves wrote, “While it’s clear the [RT] network maintains a strong pro-Russian bias, Glenn Greenwald on Tuesday defended RT’s coverage, saying it isn’t so different from what we saw on American media outlets in the lead up to the Iraq War.”

“For all the self-celebrating American journalists and political commentators: Was there even a single U.S. television host who said anything comparable to this in the lead up to, or the early stages of, the U.S. invasion of Iraq?” he wrote.

Back to Mr. Kirchick’s heroism in defense of democracy! Watch the video of how he posed some of his “simple” questions to RT employees outside their office.

What you see is a  wise-guy provocateur harassing people entering the building with hostile, if not nasty and self-righteous questions, in an argumentative and aggressively hostile manner. RT later challenged this image-building exercise of the “man who is not afraid of Putin” with a denial that they called the cops, an “update” that the Daily Beast tacked on to their story.

“RT America did not contact the DC police at any point,” Anna Belkina said in a statement. “The building’s security personnel called in the police after an intruder has been reported inside the building. The police questioned Mr. Kirchick as part of the investigation of that incident.”

Kirchick’s shouted out questions were there to call attention to himself, and score political points, and not to challenge the network that actually offers programs with views that are more diverse than on any U.S. TV news channel. It features programs with Tom Hartmann and even Larry King, both of whom deny they have been censored.

As an occasional commentator on RT News myself, I can and have said the same. I am not surprised that the networks I once worked for ABC, CNN and CNBC never have me on, while BBC, RT, Press TV and Saudi TV, among others, feature my commentaries without telling me what to say.

Kirchick is less bothered by what gets on RT than that it exists at all, and especially because the network has built an audience among Americans disgusted by how controlled and manipulated most U.S. media outlets are.

His real target are RT’s viewers who he bitterly denounces as a “species,” perhaps because they are looking for information you never find on the Daily Beast or many of the outlets he whores for as a self-styled “objective newsman.”

Listen to this: “RT has become the go-to network for a particular species of disillusioned American, fed-up with what the ‘corporate media’ is telling them about the world.” He doesn’t waste any putdowns either from  an arsenal of vituperative broadsides and even get this denounces RT employees as “slovenly.” He then rants on to share what may have been his Yale-bred elitism about his perception of the people the network interviews that includes politicians and commentators of all stripes.

“RT, both in its employment and viewership,” he writes,” seems to attract a particular type of person. You know the man who writes political chain emails IN ALL CAPS or the bag lady shouting on the street corner about the metal device the government has implanted in her head? Under normal circumstances, no one would give them a television show. But these are the people who appear on, and watch, RT.”

Oh, really another round of clichÃ©s to keep the truth from getting in the way of his preconceived perceptions. Now, now, feel better Mr. Kirchick, time to take your medication, before you melt down, or stir up more hatred and animosity for people who lack your years of slimy experience as a media warrior in the service of a neocon empire.

MR KIRCHICK? Oh, you have more to say?

“For the past 9 years, RT has provided steady paychecks and frequent media appearances to a veritable insane asylum of the great unwashed and unemployable dredges of the American fringe.”

Whew, I am glad he got that out of his system, until tomorrow, of course, when he will find another way of cursing without cursing, while showcasing superiority to those of us in that other sub- human “species.” Now, let me get back to my Rolling Stones record:

Also, by the way, do I need to say that I am not a Putin booster, my father was a veteran, I have pledged allegiance to the flag many times, and wrote two books and made a film about media miscoverage of the Iraq War. My critique was based, in part, in my own experience in network TV.

News Dissector Danny Schechter edits Mediachannel.org and blogs at NewsDissector.net. His latest book is Madiba A to Z: The Many Faces of Nelson Mandela. Comments to dissector@mediachannel.org.

← Explaining US Hypocrisy on Ukraine
Crimea’s Case for Leaving Ukraine →