Defense Secretary Chuck Hagel’s plans to trim the size of the standing U.S. army may represent a welcome step toward reining in the huge military budget, but the lack of training and work for discharged soldiers could contribute to the social crisis facing America, writes JP Sottile.

What happens when a war ends and an army comes home? It’s been a vexing problem for centuries.

After completing the long Reconquista of the Iberian Peninsula in the 15thCentury, a newly-united Spain turned its attention and its Conquistadors toward the New World. At the end of the Civil War, the Re-United States shifted its victorious army westward, quickly making the American Indian the Civil War’s biggest loser. 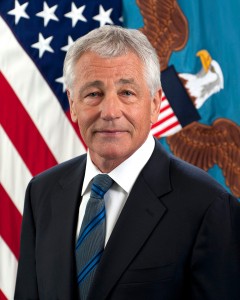 Defense Secretary Chuck Hagel in his official “portrait” at the Pentagon.

Now the United States faces the problem once again. The question is whether the Pentagon’s planned reduction of the Army to “pre-World War II levels” will be met with post-World War II solutions, or post-Vietnam-like problems?

The issue now, unlike with those wars, is that America’s army is a “professional” army. Since the post-Vietnam reboot of the Reagan years, military service has become a jobs program, a wide-ranging technical school and training program, and a de facto safety valve for the poor, the working poor and for immigrants seeking a path to citizenship. And for some in the middle class it’s been their only chance of ever affording college.

The “Be All You Can Be” military of the 1980s, along with the “One Weekend a Month” National Guard and Reserves, matched President Ronald Reagan’s Cold War calculations, but it also met a more subtle desire by a chastened Pentagon to transform the military into a professional army, with economic motivations filling the patriotic void left by the catastrophe of Vietnam.

The Vietnam demobilization was a disaster for many vets who struggled with drug abuse, PTSD, homelessness and, even to this day, a high suicide rate. The inability to absorb scarred and disillusioned draftees during the economically stagnant 1970s was in stark contrast to the overwhelming success of the G.I. Bill and the “go-go” manufacturing economy of the 1950s, which quickly and effectively assimilated a large standing army into comfortable civilian employment.

The post-World War II assimilation is staggering, active duty forces dropped from the wartime high of 12 million in 1945 to roughly 1.5 million by 1947. A combination of conscription and volunteerism sustained U.S. troop levels thereafter, meeting the increased needs of the Korean War and various Cold War deployments until the burning of draft cards and widespread protests challenged the system.

The Vietnam backlash led to the functional end of the draft and the marketing of military service as a career development program. As a bonus, this re-branding of service created a new pro-military constituency within the body politic. Like defense contractors’ use of civilian manufacturing jobs to secure congressional support, the new “employee army” offered enlistees a rational economic benefit beyond patriotism. It also gave the economy some help along the way, providing an injection of good old-fashioned socialism under the guise of patriotic duty.

While many high school grads accumulated massive, inescapable debts as college students, the all-volunteer military offered a way out of the economic dead-ends created by the unleashing of Wall Street’s financial wizards, the end of manufacturing and the outsourcing of, it seemed, just about everything.

Military service mitigated the effects of Reaganomics in the 1980s, offered an alternative to the free trade and tech-bubble economy of the 1990s and, with a rapid post-9/11 ramp up, created an economic safety net for the faux economy of the new century. Americans were asked to support the troops while employing the troops actually helped to support America’s hollow economy.

Although these Army personnel cuts come at a time when Wall Street enjoys record highs and policymakers talk about “The Recovery” as if it’s an actual thing, Americans remain unconvinced that the rising tide is lifting their boats. Gallup’s latest poll shows unemployment atop their list of concerns, with the “economy in general” a close second. Americans want and need jobs, and not just the type of jobs that will benefit from a rise in the minimum wage.

For those scheduled to leave military service in the near term, they will find themselves in a wage-depressed, job-scarce economy. For those who planned on using the military “safety valve” as a way out of a stagnant future, the Pentagon is curtailing one of the only employment and job-training programs available to the poor, the working poor and the dwindling middle class.

Some called it the “poverty draft”, meaning that the poor had few options other than military service. Military recruiters called it “easy cash,” reaping illicit signing bonuses in what’s become a huge kickback scandal reaching up the chain of command. But none dare call it what it often is, a safety net for those who might otherwise fall through the cracks.

Just think what the Great Recession could’ve been like if America didn’t have over 540,000 people in the Army or a total of 1.4 million in uniform, all earning paychecks, getting healthcare and removed from the harrowing competition of a severely depressed job market?

And what would happen if even a quarter of the 1,387,638 active duty military serving in 2013 tried to get jobs in an economy in which companies with only 55 employees get sold for $19 billion, in which bank tellers depend on public assistance to scrape by and many Americans are one missed paycheck from disaster?

(A preferred answer would be for government to create decent-paying jobs in rebuilding the nation’s infrastructure and to invest in research and development that would mean more jobs as well as training and education for high-skilled workers. But there are few signs that Congress will approve such expenditures.)

Maybe some other answer is coming, or maybe the answer is that the army isn’t really coming home. Rather, it’s just pursuing some cost-cutting measures designed to lower overhead and increase profitability.

The rise of flying killer robots, warfare by algorithm and a wide array of high-tech options to low-tech boots on the ground all give the Pentagon an easy way to reduce personnel costs without curtailing its global appetite for destruction.

On the surface it looks like an incremental step away from empire. But it’s really a corporate-style move to cut the one thing all executives like to cut most, the cost of labor. In addition to trimming the Army down to around 440,000, other cost-cutting measures include:

–A one-year salary freeze for most officers

–“Slowing of growth” in the tax-free housing allowance

Of course, there is nothing here about closing down the Pentagon’s world-wide network of lush golf courses, freezing the F-35 program until rampant cost overruns can be stopped or cutting the actual defense budget.

In fact, the White House is plotting a rise in spending for 2016. In light of Defense Secretary Chuck Hagel’s plan, these cuts really amount to a windfall for the Military-Industrial makers of high-tech weaponry by shifting cost savings into new, profitable weapons systems.

Meanwhile, active-duty enlistees are increasingly reliant on food stamps. Last year, military families redeemed $104 million worth of taxpayer-supplied food stamps at those subsidized commissaries the Pentagon wants to trim. That’s up from nearly $25 million in 2007. But it’s still a drop in the bucket compared to the 44 million Americans who rely on those same food stamps but don’t have access to subsidized commissaries.

So, like civilian workers, military personnel face a daunting future of stagnant wages and declining benefits. If they do come home, the one part of the economy that can absorb them is the growing police state, which receives excess military hardware doled out by the Pentagon, and the flourishing prison system, which leads the world in incarceration. Perhaps out-of-work soldiers can leverage their training to get jobs guarding the 700,000 veterans currently imprisoned in America.

If so, they’d be closing the “circle of professionalism” that began as a response to Vietnam, but also typified an ongoing unwillingness to invest in the civilian economy like America did at the end of World War II.

JP Sottile is a freelance journalist, radio co-host, documentary filmmaker and former broadcast news producer in Washington, D.C. His weekly show, Inside the Headlines w/ The Newsvandal, co-hosted by James Moore, airs every Friday on KRUU-FM in Fairfield, Iowa and is available online. He blogs at Newsvandal.com, where this article originally appeared.

← A Shadow US Foreign Policy
Ukraine: One ‘Regime Change’ Too Many? →

5 comments for “What Will the Discharged US Soldiers Do?”