Exclusive: The Democrats sound self-satisfied that there is so little internal opposition to Hillary Clinton for President, but this rush to a coronation is ignoring questions about her judgment as a New York Senator and Secretary of State — and whether she is prone to war, writes Robert Parry.

As President Barack Obama tries to pick his way through a minefield of complex foreign policy issues from Iran’s nuclear program to the Syrian civil war to Israeli-Palestinian peace to unrest in Ukraine he is beset by incessant criticism from much of Official Washington which still retains the neocon influences of the last two decades.

Indeed, the failure to impose any meaningful accountability on Republicans, Democrats, senior editors and think-tank analysts who cheered on the Iraq War disaster makes it hard to envision how President Obama can navigate this maze of difficult negotiations and trade-offs needed to resolve conflicts in the world’s hot spots. 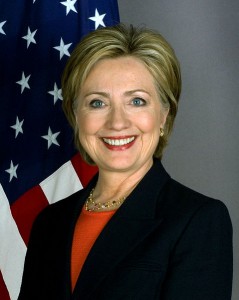 Successful negotiations require both an objective assessment of ground truth, i.e. a cold-eyed view of the actual power relationships between the disputing parties, and flexibility, i.e. the readiness to make concessions that accommodate the realistic needs of the two sides.

Yet, Official Washington has become a place of “tough-guy/gal” bluster where the only purpose of negotiations is for the “anti-U.S.” side to come in and surrender. That is why the likes of Washington Post editorial-page editor Fred Hiatt are always calling for the U.S. to issue military ultimatums to disfavored foreign leaders, giving them the choice of doing what they’re told or facing U.S. attack.

We saw the same attitude before President George W. Bush invaded Iraq in 2003: Bush’s escalating demands that Saddam Hussein surrender his stockpiles of WMD, American outrage when the Iraqi government insisted that the WMD no longer existed, and then the need to respond to Iraq’s arrogance and intransigence by going to war to protect U.S. “credibility.”

The fact that Iraq was telling the truth about its lack of WMD did not lead to mass firings of Official Washington’s opinion leaders, nor serious consequences for politicians who collaborated in this war crime. Bush won reelection; most of the war hawks kept their seats in Congress; and Hiatt and the other neocon media personalities remained employed.

Perhaps most interestingly, a top Democratic war hawk, Hillary Clinton, is now considered the odds-on favorite to get the Democratic Party’s presidential nomination. Her defenders even cite bipartisan Republican praise for her foreign policy attitudes from the likes of former Vice President Dick Cheney and neocon Senators Lindsey Graham and John McCain.

As for buying into Bush’s bogus case for invading Iraq, Clinton’s backers insist that she learned from this “mistake.” But there is new information in Robert Gates’s memoir, Duty, that shows how little Clinton and other Democrats did learn from the Iraq War deception, even when it came to later chapters of the Iraq War.

Sen. Clinton was among the leading Democrats on the Senate Armed Services Committee who were completely fooled by the significance of Gates’s nomination in November 2006 to replace Donald Rumsfeld as Defense Secretary. They again followed blindly the conventional wisdom, which at the time held that President Bush picked Gates to wind down the war and that he was essentially ceding control of U.S. foreign policy to the wiser national security team of his father’s administration.

There were clear warnings to the contrary, including some published at Consortiumnews.com, that Sen. Clinton and other senators were again getting the narrative wrong, that Gates’s nomination foreshadowed an escalation of the war and that Rumsfeld was getting the boot because he backed the field generals who favored shrinking the U.S. footprint in Iraq.

Writing on the Wall

This reality was even spelled out by right-wing pundit Fred Barnes in the neocon Weekly Standard, writing that Gates “is not the point man for a boarding party of former national security officials from the elder President Bush’s administration taking over defense and foreign policy in his son’s administration.” Barnes wrote that “rarely has the press gotten a story so wrong.”

Barnes reported that the younger George Bush didn’t consult his father and only picked ex-CIA Director Gates after a two-hour face-to-face meeting at which the younger Bush got assurances that Gates was onboard with the neocon notion of “democracy promotion” in the Middle East and shared Bush’s goal of victory in Iraq. [The Weekly Standard, Nov. 27, 2006]

But the mainstream press was enamored with its new storyline. A Newsweek cover pictured a large George H.W. Bush towering over a small George W. Bush. Then, embracing this conventional wisdom, Clinton and other Senate Armed Services Committee members brushed aside the warnings about Gates, both his troubling history at the CIA and his likely support for a war escalation.

Facing no probing questions, Gates offered up some bromides about his “fresh eyes” and his determination not to be “a bump on a log,” while Clinton and other Democratic senators praised his “candor” before joining in a 21-0 vote to endorse his nomination, which went on to a 95-2 confirmation by the full Senate.

However, once installed at the Pentagon, Gates became a central figure in the Iraq War “surge,” which dispatched 30,000 more U.S. troops to Iraq in 2007. The “surge” saw casualty figures spike. Nearly 1,000 additional American died along with an untold number of Iraqis. And despite another conventional wisdom about the “successful surge” it failed to achieve its central goal of getting the Iraqis to achieve compromises on their sectarian divisions.

In the end, all the Iraq War “surge” did was buy President Bush and his neocon advisers time to get out of office before the failure of the Iraq War became obvious to the American public. Its other primary consequence was to encourage Defense Secretary Gates, who was kept on by President Obama as a sign of bipartisanship, to conjure up another “surge” for Afghanistan.

So, it was enlightening to read in Duty, Gates’s recollection of his 2006 nomination and his insights into how completely clueless Official Washington was. Regarding the conventional wisdom about Bush-41 taking the reins from Bush-43, Gates wrote about his recruitment by the younger Bush: “It was clear he had not consulted his father about this possible appointment and that, contrary to later speculation, Bush 41 had no role in it.”

Though Gates doesn’t single out Hillary Clinton for misreading the significance of his nomination, Gates wrote: “The Democrats were even more enthusiastic, believing my appointment would somehow hasten the end of the war. If I had any doubt before the calls [with Democrats] that nearly everyone in Washington believed I would have a one-item agenda as secretary, it was dispelled in those calls.

“They professed to be enormously pleased with my nomination and offered their support, I think mainly because they thought that I, as a member of the Iraq Study Group [which had called for winding down the war], would embrace their desire to begin withdrawing from Iraq.”

In Duty, Gates also acknowledges that he was always a supporter of the Iraq invasion, writing that in 2003, “I supported Bush 43’s decision to invade and bring Saddam down.” The failure of Clinton and other Democrats on the Senate Armed Services Committee to fully vet Gates’s attitudes on the Iraq War was a stunning failure of their own duty.

Regarding the mainstream news media’s wrongheaded take on his nomination, Gates wrote: “There was a lot of hilarious commentary about a return to ‘41’s’ team, the president’s father coming to the rescue, former secretary of state Jim Baker pulling all the strings behind the scenes, and how I was going to purge the Pentagon of Rumsfeld’s appointees, ‘clean out the E-Ring’ (the outer corridor of the Pentagon where most senior Defense civilians have their offices). It was all complete nonsense.”

Cheering on the ‘Surge’

Yet, the mainstream press didn’t get any closer to the mark in 2008 when it began cheering the “surge” as a great success, getting spun by the neocons who noted a gradual drop in the casualty levels. The media honchos, many of whom supported the invasion in 2003, ignored that Bush had laid out specific policy goals for the “surge,” none of which were achieved.

In Duty, Gates reminds us of those original targets, writing: “Prior to the deployment, clear benchmarks should be established for the Iraqi government to meet during the time of the augmentation, from national reconciliation to revenue sharing, etc. It should be made quite clear to the Iraqi government that the augmentation period is of specific length and that success in meeting the benchmarks will determine the timetable for withdrawal of the base force subsequent to the temporary augmentation.”

Those benchmarks were set for the Iraqi government to meet, but “national reconciliation to revenue sharing, etc.” were never achieved, either during the “surge” or since then. To this day, Iraq remains a society bitterly divided along sectarian lines with the out-of-power Sunnis again sidling up to al-Qaeda-connected extremists.

In possibly the most shocking disclosure in Duty, Gates recounts a 2009 White House meeting regarding the Afghan War “surge.” He wrote: “The exchange that followed was remarkable. In strongly supporting the surge in Afghanistan, Hillary told the president that her opposition to the surge in Iraq had been political because she was facing him in the Iowa primary [in 2008]. She went on to say, ‘The Iraq surge worked.’

“The president conceded vaguely that opposition to the Iraq surge had been political. To hear the two of them making these admissions, and in front of me, was as surprising as it was dismaying.” Obama’s aides have since disputed Gates’s suggestion that the President indicated that his opposition to the Iraq “surge” was political, noting that he had always opposed the Iraq War. The Clinton team has not challenged Gates’s account.

Of course, Official Washington’s misreading of Gates’s nomination in 2006 and its mistaken belief in the “successful surge” may pale in comparison to the fundamental crime of invading Iraq under false pretenses in 2003. But this benighted behavior continues to show how the lack of individual accountability for one failure ensures another and another.

It also adds to the complications facing President Obama as he tries to find solutions on Iran, Syria, Israel-Palestine and Ukraine. Though he opposed the Iraq War and has sidestepped demands for U.S. military attacks on Iran and Syria, his maneuvering room is tightly constrained by the many hawks in his own administration and the neocons who still dominate the major U.S. op-ed pages and think tanks.

Beyond the fact that many of these old Iraq War cheerleaders still hold down seats at influential media outlets, inside Congress and even in the Executive Branch, Democratic leaders are moving toward nominating one of the party’s staunchest war supporters to be the next President of the United States.

One has to wonder whether rank-and-file Democrats will insist on grilling Hillary Clinton about what she has and hasn’t learned from the Iraq War disaster and other aggressive use of U.S. military force before she wraps up the party’s nomination. [For more on this topic, see Consortiumnews.com’s “Is Hillary Clinton a Neocon-lite?”]

← Treating Netanyahu Like Winston Churchill
Amazon’s Marriage to the CIA →