The U.S. and French presidents are making nice at the start of a state visit, but just weeks ago France was carrying water for the Saudis, trying to drown a nuclear deal with Iran and opening the flood gates for war with Syria. But France now stresses its accord with the U.S., says ex-CIA analyst Paul R. Pillar.

An op ed in the Washington Post carrying the joint byline of Barack Obama and FranÃ§ois Hollande, on the occasion of the latter’s visit to Washington, is one of the more conspicuous demonstrations of kumbaya within the North Atlantic alliance.

For the two governments to produce such a statement reflects how harmonious relations between states generally considered to be friends or allies are, within the political discourse of each country, almost always considered to be a good thing. Demonstrating the ability to play well with others, as one might read on an elementary school report card, can help to offset poorer grades that critics might assign on other topics. 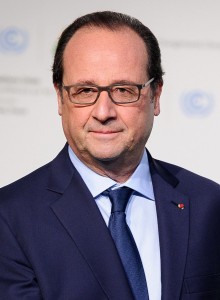 Obama benefits from demonstrating close relations with a government that has taken a more forceful line toward some issues, such as the civil war in Syria, on which some of Obama’s domestic critics wish he would be more forceful. Making nice with the U.S. president distracts from several of Hollande’s problems, including his convoluted private liaisons that have gotten the attention even of the French public, which usually is nonchalant about its leaders’ sex lives, and that have complicated the work of the White House social staff arranging this week’s state dinner.

Expect a similar gauge of success and failure to be applied when President Obama visits Saudi Arabia next month. Most commentary will rate the visit successful to the extent that good vibrations and commonality of views emanate from the meeting, and rate it a failure to the extent that differences between U.S. and Saudi policies remain more conspicuous.

Overtly harmonious relations with self-styled allies can indeed be associated with good things happening for U.S. interests. At a minimum, such a relationship indicates that the managers of our foreign policy are at least performing the basic function of serious engagement with other important countries. That is not to be taken for granted.

The Obama-Hollande op ed makes a mild reference to how it was not happening in the recent past (“A decade ago, few would have imagined our two countries working so closely together…”), when Old Europe was being cavalierly dismissed.

Good relations also tend to be associated with positive incentives for desirable behavior, which have some significant advantages over negative incentives for not just the country whose behavior is in question but also for the country holding out the incentives. This too often gets overlooked when the first reaction of many people to an overseas problem is to ask what new sanction we can apply or whom we can threaten with military attack.

Realists always keep in mind, however, that what matters is not the singing of kumbaya but getting desirable behavior out of others. The others in question may not be people on the other side of a state dinner table or even a negotiating table. And the relationships that matter in eliciting desired behavior are not always ones with traditional friends and allies.

On Syria, for example, although the Obama-Hollande piece tries to disguise earlier differences by saying “our credible threat of force paved the way for the plan to eliminate Syria’s chemical weapons,” it was the United States dealing with Russia that mattered most in coming up with that plan and putting it into operation.

As another example, if one were to ask what engagement today, by either the United States or France, is most likely to secure important desired behavior on a national security matter, the answer might be the nuclear negotiations with Iran, even though nothing approaching close friendship with Iran is in the foreseeable future even if those negotiations succeed.

When there does appear to be a close and harmonious relationship between the United States and another government, this could mean any of several things, some of which are good for U.S. interests and some of which are not. There might be a natural convergence of interests that doesn’t require any incentives or diplomatic stroking; when that is the case we should smile and urge our policy-makers and diplomats to direct their time and energies to other, more problematic matters.

Another possibility is that the other country is falling in line behind U.S. preferences. That usually is good for the United States, although not when the preferences may themselves not be in U.S. interests, as was true a decade ago with the Iraq War, when the U.S. administration would have been better off listening to the resistant French and Germans than merely accepting the affections of the poodle Blair.

We should keep that in mind when the president visits Saudi Arabia. It is one of several countries in the Middle East, Egypt and Israel immediately come to mind as others, that usually are regarded as friends or allies of the United States but where the relationship would sound harmonious only if the United States caves in to certain tendencies of the other government that are damaging to U.S. interests, and even ultimately damaging to the other country itself.

The United States has no interest in taking sides, along with Saudi Arabia, in religiously defined conflicts between Sunni and Shia. Nor are U.S. interests served by going along with authoritarian crackdowns and consolidation of power by the military regime in Egypt. And U.S. interests certainly are not served by acquiescing in the Israeli government’s indefinite subjugation of Palestinians, trigger-happy and disruptive uses of military force, and attempts to sabotage negotiations with Iran.

In each of these cases, some bad vibrations coming out of bilateral meetings could be a good sign. They might indicate steadfast upholding of what really is in U.S. interests, however much this may displease the rulers on the other side of the table. It might indicate appropriate awareness by U.S. policy-makers of who is dependent on whom, a particular consideration regarding the enormous unused leverage over Israel, based on huge material and diplomatic support.

It probably would indicate awareness as well of how the nature of U.S. relations with each of these states affects the motivations and hatreds of others, who perceive the United States to be in bed with regimes that are authoritarian, have a narrow sectarian allegiance, or deny the rights of conquered people.