Exclusive: Secretary of State John Kerry’s negotiations to resolve the generations-long Israeli-Palestinian conflict may look like a quixotic pilgrimage into endless frustrations to many. But it is causing worries among nationalists on Israel’s Right, Robert Parry reports.

Five right-wing Israeli rabbis say U.S. Secretary of State John Kerry deserves the destructive fate that has met past enemies of the Jewish people because of his efforts to reach a peace agreement that would establish a Palestinian state on the West Bank.

In an open letter to Kerry, these nationalist rabbis likened Kerry to Haman, the Persian vizier and the villain in the Book of Esther who “contrived a vicious plot” against the Jews but ended up along with his sons hanged “on the very same gallows he had prepared for Mordechai, the Jew.” Haman was then impaled on a sharpened pole for good measure. 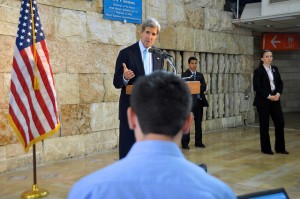 U.S. Secretary of State John Kerry answers a question from an Israeli reporter during a news conference in Tel Aviv, Israel, on June 30, 2013.[State Department photo]

The letter said Kerry’s “incessant efforts to expropriate integral parts of our Holy Land and hand them over to [Palestinian leader Mahmoud] Abbas’s terrorist gang amount to a declaration of war against the Creator and Ruler of the universe.”

The group of rabbis from the Committee to Save the Land and People of Israel warned Kerry that if he persists in his “destructive path,” he will earn “everlasting disgrace in Jewish history for bringing calamity upon the Jewish people like Nebuchadnezer and Titus who destroyed, respectively, the first and second great Temples and the entire Holy City of Jerusalem, and who, by Heavenly punishment, brought eventual disaster upon themselves.”

Israeli religious nationalists consider the West Bank to be land that God gave to the Israelites in perpetuity, territory called by many Israeli leaders by the Biblical names Judea and Samaria. But international law grants the land to the Palestinians and considers Jewish settlements on the land to be illegal.

The rabbis’ letter condemned Kerry for seeking to establish a Palestinian state on the West Bank, despite the expectation that Kerry will propose some land concessions to Israel so several hundred thousand Jewish settlers can remain in their homes. But any compromise is unacceptable to the five rabbis, according to their letter.

“For G-d awarded the entire Land of Israel to our ancestors, Abraham, Isaac and Jacob, in order that they bequeath it, as an everlasting inheritance, to their descendants, the Jewish people, until the end of all time,” the letter read. “By the power of our Holy Torah, we admonish you to cease immediately all efforts to achieve these disastrous agreements, in order to avoid severe Heavenly punishment for everyone involved.”

The signers of the letter were Gedalya Axelrod, emeritus head of Haifa Rabbinic Court; Yisrael Ariel, chairman of the Temple Institute; Ben Tziyon Grossman, a rabbi in Migdal Haemek; Shalom Dov Wolpo, dean of the Institute for Complete Code of Maimonides; and Yigal Pizam, head of the Yeshiva of Kiryat Shmuel.

Rabbis Shalom Dov Wolpo and Yisrael Ariel were associated with the ultra-nationalist political activities of the late Meir Kahane who founded the militant Jewish Defense League and Kach, an Israeli political party that was denounced by the Israeli government as racist.

Though the five rabbis are considered to be on the fringe of Israeli politics, their condemnation of Kerry reflects a growing resistance within more mainstream Israeli circles to Kerry’s persistence in seeking a resolution to the long-running Israeli-Palestinian conflict. Kerry is expected soon to unveil his proposed framework for a possible settlement.