The endless double standards demonstrated by U.S. pols and pundits toward U.S. “friends” vs. “enemies” have created a wildly distorted frame for a public trying to distinguish between genuine threats and propaganda themes, as Lawrence Davidson found regarding Iran.

The investigative reporter and author Gareth Porter has recently published a book entitled  A Manufactured Crisis: The Untold Story of the Iran Nuclear Scare. An impressively written and researched work, it is also frightening in its implications. For if Porter’s allegations are accurate, it is not Iran that the American people should fear – it is their own politicians, bureaucrats and an “ally” named Israel.

According to Porter, there has never been a serious nuclear weapons program undertaken by Iran. By the way, this is a conclusion that is supported by the heads of all American intelligence agencies reporting annually to Congress. Unfortunately, this repeated determination has been scorned by the politicians and poorly reported by the media. 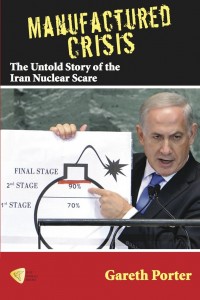 As a result the American people lack the knowledge to independently judge Iranian actions as regards nuclear research, and so can be led to erroneous conclusions by those pursuing their own political or ideological ends or, as in the present case, the intrigues of a foreign government.

Following the end of the Cold War, the U.S. foreign relations, military and “defense” bureaucracies quickly focused on the issue of terrorism. And well they might, for their own policies of backing all manner of right-wing dictatorships had identified the U.S. as an enemy of almost every resistance movement on the planet.

These wrongheaded policies provoked violent responses, including the attacks of Sept. 11, 2001. From that point on, the threat of terrorist attacks, particularly involving “weapons of mass destruction,” or WMDs, became the main selling point of every bureaucrat, politician and soldier looking for a bigger “defense” budget.

President George W. Bush was the main promoter of this line of thinking and the invasion of Iraq the major corresponding catastrophe. Memories of that disaster, so expensive in lives and treasure, along with the lingering war in Afghanistan, have caused a war-weariness among the American people that may be their ultimate saving grace.

With Iraq in shambles and no longer a “threat,” the attention of American policy makers turned to Iran. Forgetting all about the horrible blunder our neoconservative President Bush and his advisers had made over Iraqi WMDs, an even larger coalition of political forces started a slow buildup of popular anxiety over Iranian nuclear research. But where was the evidence? For this, one can always rely on the Israelis.

Porter describes how successive Israeli governments exaggerated the threat of Iran in order to, among other things, rationalize their own expansionist ambitions and bind the United States government ever closer to Israeli interests. In 2004, a laptop, allegedly taken from an Iranian scientist, was given by the Israelis to U.S. intelligence agents. Since 2008 much of the so-called evidence for an Iranian nuclear weapons program has come from material on this computer. Porter makes a convincing argument that this data, as well as additional material, are Israeli forgeries.

Despite the fact that Iran has satisfied both the American intelligence services and the International Atomic Energy Agency that it is not pursuing nuclear weapons development, U.S. politicians and media refuse to let the matter go. Hence the recent spectacle of the U.S. Senate presenting an almost veto-proof bill demanding yet more sanctions on Iran, despite the likelihood that such an act would ruin diplomatic negotiations and make hostilities all the more likely.

One has to ask in whose interest is such an obsessive anti-Iranian stance? Not the interest of the United States. Indeed, the Senate gambit started to unravel when President Obama implied that the demand for more sanctions on Iran threatened U.S. national interests.

On the Ground in Iran

I recently spent 11 days in Iran as part of group of Academics for Peace (a subdivision of Conscience International), returning to the U.S. on Jan. 29. On the ground in that country is a mix of optimism and anxiety. Some Iranians feel persecuted by the U.S. government. They can’t understand why sanctions have been imposed upon them. They like the American people and look forward to a return of the tourist trade, but the behavior of the U.S. government is often a mystery to them.

As is so often the case, U.S.-sponsored sanctions have hurt ordinary people with no influence on policy. The sanctions have resulted in inflation, higher rates of pollution, less-safe civilian aircraft, shortages of some medical supplies, the isolation of Iranian banks, and the reduction of exports.

A Gallup poll taken in Iran in late in 2013 showed that 85 percent of respondents felt that sanctions had hurt their standard of living. On the other hand, other countries, such as China, have taken advantage of the Western refusal to deal with Iran. Presently the country is full of Chinese businessmen and their inexpensive imports.

The Obama administration’s willingness to finally take up Iran’s offer to negotiate differences (one should remember President Khatami’s spurned offer made in 2003) has raised great hopes. Many Iranians are simply holding their breath hoping for that elusive final comprehensive agreement between Iran and the P5 + 1 powers (the five permanent members of the UN Security Council plus Germany).

One should also note that there is a minority of Iranians, mostly technicians, scientists and some businessmen, who are of a mixed mind when it comes to sanctions. On the one hand, banking and export limitations are a real economic hindrance. And, for all of those in the West concerned with the free flow of information, there seems to be an ongoing ban against Iranian scholars by American scholarly journals.

On the other hand, there are Iranians who find at least some of the sanctions genuinely beneficial. The fact is that Iran has become a lot more self-sufficient under the sanctions and these people don’t want to see the country lose that edge. The government is developing industrial and research parks to keep its R&D pace going. But what will happen when and if the sanctions go away? Will Iran’s economy get sucked into the neoliberal vortex of the Western marketplace?

While there are sanction-related problems, the Iranian economy has not been stilled. In the capital of Tehran, along with the traffic congestion and air pollution, there are a myriad of building projects. These are not signs of a society shriveling on the vine. To go beyond the present level of sanctions and impose the ever more draconian measures proposed by the U.S. Senate comes close to an act of war.

Iran is not like the United States. The women cover their hair in public and men do not wear ties. Most of the time men do not shake hands with women, nor is affection shown between sexes in public.

The government is different too. While there is an elected president and parliament, there is also a Supreme Leader who has the last say on most matters. However, unlike those leaders in the U.S., Iran’s leadership has not yet misled their people into foreign wars.

The “Iranian problem” is really a U.S. problem. It points up very deep flaws in the U.S. political system, where money is legally considered “free speech” and policy formation often follows the wishes of the highest bidder.

We have too many built-in incentives for war in this country: a military-industrial complex that employs millions, both Democratic and Republican politicians who find political success in supporting “defense” contractors, neoconservative ideologues who want the U.S. to militarily dominate the globe, self-interested bureaucrats whose budgets depend on an endless array of alleged threats, and special interest lobbies tied to foreign powers seeking to turn American aggressiveness toward targets of their own choosing.

The outcome is often policies that kill and maim millions. It is only the present war-weariness of the American people that, for now, holds all of this destructive influence at bay.

The only reasonable conclusion is that Gareth Porter’s portrayal of the conflict with Iran stands true. And, as a consequence, the American people have far less to worry about with Iran than they do with the machinations of many of their own leaders.

3 comments for “Where the Real ‘Iran Threat’ Lies”