Nazi metaphors should be avoided except in the most extreme cases of human cruelty. But that metaphor is especially obscene when today’s pampered rich, like billionaire Tom Perkins, compare themselves to persecuted Jews, as Bill Moyers and Michael Winship observe.

There’s a rule of thumb in cyberspace etiquette, known as Godwin’s Law named after Mike Godwin, the Internet lawyer and activist who first came up with it. A variation of that law boils down to this: He who first compares the other side to Nazis loses, and the conversation is at an end. Unless you’re billionaire Tom Perkins, who seems dedicated to digging a deeper and deeper hole for himself.

By now you’re probably heard about Perkins’ infamous letter to The Wall Street Journal (whose editorial page is the rich man’s Pravda of class warfare) in which he wrote, “I would call attention to the parallels of fascist Nazi Germany to its war on its ‘one percent,’ namely its Jews, to the progressive war on the American one percent, namely the ‘rich’This is a very dangerous drift in our American thinking.  Kristallnacht was unthinkable in 1930; is its descendant ‘progressive’ radicalism unthinkable now?” 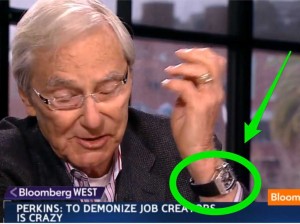 It’s astonishing how ignorant (not to mention crude and cruel) the very rich can be. Surely, one of his well-paid retainers could have reminded Mr. Perkins that Kristallnacht was the opening salvo in Hitler’s extermination of the Jews, the “night of broken glass” in 1938 Germany and Austria when nearly 100 Jews were murdered, 30,000 were sent to concentration camps, and synagogues and Jewish-owned business were looted and destroyed, many of them burned to the ground. If Perkins thought his puny point survived the outrageous exaggeration, he was sadly mistaken.

Nonetheless, after a stunned world responded, venture capitalist Perkins went on Bloomberg TV to apologize for using the word “Kristallnacht” but not for the sentiment of his letter. “I don’t regret the message at all,” he said. “Anytime the majority starts to demonize the minority, no matter what it is, it’s wrong and dangerous and no good comes from it.”

Perkins also said that he has family “living in trailer parks,” but bragged like some cackling James Bond villain that he owns “an airplane that flies underwater” and a wristwatch that “could buy a six-pack of Rolexes.”

That watch, on prominent display during the Bloomberg interview, is a Richard Mille, a charming little timepiece that can retail for more than $300,000. At that price, a watch shouldn’t just tell you the time, it should allow you to travel through it, perhaps back to the Gilded Age or Versailles in 1789, just as the tumbrils rolled in. Here in the office, our $85 Timex and Seiko watches have crossed their hands over their faces in shame.

That Richard Mille watch triggered TV producer David Simon’s comment on Moyers & Company next week that it should be sold and used to open drug treatment centers in Baltimore, the city where Simon was a crime reporter and which served as the backdrop and central character of his classic HBO series The Wire.  [You can see the complete excerpt here: http://billmoyers.com/2014/01/30/advice-to-perkins-time-to-shut-up/]

By the way, the other David Simon (the CEO of Simon Property Group) is no longer the highest paid American. The title now goes to CBS Chair and CEO Leslie Moonves, who’s getting a salary of $60 million, and will always be remembered by us as the man who said of rampant political spending, “Super PACs may be bad for America, but they’re very good for CBS.”

Pity the rich their gluttony; it has made them blind.

3 comments for “The ‘Persecuted’ Rich”