The death of Pete Seeger on Monday brought back waves of memories for millions of people around the world who recalled his friendly tenor voice appealing to the best instincts of mankind, urging an end to war and want, as Michael Winship recalls.

Not only was it sad to hear the news of Pete Seeger’s passing but startling to realize that it was 45 long years ago that we first met. It was in 1969, at Georgetown University, when I was a callow college freshman and he already was a legend among folk music lovers and political activists.

I knew his songs, had many of his records and played them all the time, especially a concert album with the great Bernice Johnson Reagon, founder of Sweet Honey in the Rock, and the Rev. Frederick Douglass Kirkpatrick, the Baptist minister in charge of folk culture for Dr. King and the Southern Christian Leadership Conference.

There was another album I loved called “Waist Deep in the Big Muddy and Other Love Songs.” It wasn’t so much the folk music revival of the Fifties and Sixties that first drew me to Seeger, but that title song. “Waist Deep in the Big Muddy” told the story of a captain ordering a platoon to cross a river despite his sergeant’s warning that the water was too deep and treacherous. 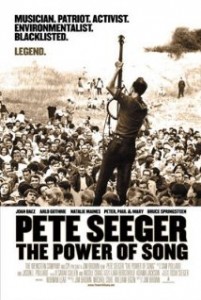 It was an explicit metaphor for the quagmire of Vietnam and the escalation policy of President Lyndon Johnson, each verse but the last ending with the bitter, “The big fool said to push on.” When Seeger first tried to sing it on The Smothers Brothers Comedy Hour, CBS network executives censored it from the broadcast but relented under pressure and he returned to perform it in late February 1968; coincidentally, less than a month after the attacks of the Tet offensive took U.S. forces in South Vietnam by surprise and radically changed American public opinion about the war.

In the years after, Seeger and his music would float in and out of my life like a warm summer breeze, that unique combination of laid back and earnest always in his light tenor voice. I’d see him from a distance or we’d talk backstage at concerts and rallies.

That first time, at Georgetown, was the Friday afternoon before the massive Moratorium March on Washington on Nov. 15, 1969. Kids from around the country had come to DC for the anti-Vietnam protest and Georgetown had reluctantly opened its dorms and other buildings so they’d have an indoor place to sleep, one of several times in those years that the school would become a de facto Day’s Inn for protesters.

One of the rooms that had been opened to we, the rabble, was a lecture space off the main campus at the foreign service school called the Hall of Nations — so named because the walls were lined with the national flags of UN members. That weekend, the university removed all the flags, apparently fearing theft, desecration or students from Vanderbilt or Ohio State huddled under the banner of Ethiopia for warmth.  But they left the shiny metal flagpoles in place, each of which, for some unknown reason was sharpened at the top end to a fine point.

I was sent to the main gate of the campus to gather Pete and bring him to the Hall of Nations so he could briefly entertain the students camping out there. We chatted on the short walk over and when we arrived, Pete’s eyes widened as he approached the stage and saw the flagpoles arrayed in rows like deadly weapons about to be seized and carried into battle.

He paused, then exclaimed, “Look at all the spears!” There was laughter and applause. Pete shouted, “Let’s beat ‘em into ploughshares!” And he began to sing and play his five-string banjo, asking, as he always did, for everyone to join in.

The next day, a quarter of a million or more gathered around the Mall and the Washington Monument on a cold but sunny Saturday. Pete led the crowd singing a new song by John Lennon called, “Give Peace a Chance.”

Four decades later, many of us were back at the Washington Monument on another chilly afternoon two days before Barack Obama’s inauguration, looking down the Reflecting Pool to the Lincoln Memorial, where Pete and Bruce Springsteen performed “This Land Is Your Land,” our alternative national anthem by Pete’s good friend Woody Guthrie. They even sang the “forbidden” verse:

“In the shadow of the steeple I saw my people,
By the relief office I seen my people.
As they stood there hungry, I stood there asking
Is this land made for you and me?”

Still a good question. Pete Seeger, RIP and God bless. As you used to say, take it easy, but take it.

Michel Winship, senior writing fellow at the public policy and analysis group Demos, is senior writer of the weekly public affairs series Moyers & Company on public television. To comment or for more information, go to www.BillMoyers.com.

1 comment for “Pete Seeger and the Causes of Mankind”