In the final speech of his life, Martin Luther King Jr. talked about reaching the mountaintop and gazing down on a promised land of a brighter future. But today’s mountaintops are often reserved for elites to meet and gaze upon each other, with the teeming masses far from view, as Danny Schechter reflects.

Mountaintops offer dynamic vistas and symbolize not only physical heights but inspiring points of prominence. On the night before he was murdered, Martin Luther King Jr. told a packed church in Memphis, Tennessee, where he was crusading on behalf of the city’s garbage workers, that he had been to the mountain top.

Dr. King was practically singing as he bellowed, “Like anybody, I would like to live a long life. Longevity has its place. But I’m not concerned about that now. I just want to do God’s will. And He’s allowed me to go up to the mountain. And I’ve looked over. And I’ve seen the Promised Land. I may not get there with you. But I want you to know tonight, that we, as a people, will get to the promised land!” 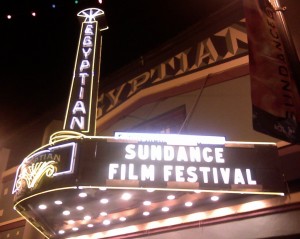 To him, climbing that mountain also offered a panoramic view of a world of pain and change. Earlier in that prophetic final oration, Dr. King spoke of the human condition in these terms: “the world is all messed up. The nation is sick. Trouble is in the land; confusion all around. That’s a strange statement. But I know, somehow, that only when it is dark enough can you see the stars.”

I have just returned from another mountaintop where the streets are packed with people traipsing through the cold and snow, looking for other stars, movie stars. The Sundance Film Festival is on, based in the wealthy resort of Park City, Utah, up on a snowy mountain not far from Salt Lake City, attracting movie aficionados, show biz wannabes, groupies and skiers.

Most are there to embrace (or worship) the commanding heights of our culture industry. There were plenty of contradictions on display as well. The actor Robert Redford who created Sundance seems to have become less infatuated with the annual spectacle.

The Hollywood Reporter profiled him, noting, “Redford seems ambivalent about the festival’s success, however, hostile to the corporate and marketing forces overwhelmed his counter-cultural creation, while appreciative about everything it has achieved.”

Journalists who cover show biz were even less excited, reported Sharon Waxman, editor or the Hollywood website The Wrap: “If you weren’t at Sundance this year, it’s just as well. The lack of a breakout, buzzy film that had everyone talking tells us something about the challenged state of independent film. While the festival had glimmers of excitement, the movies were in the aggregate interesting but not inspiring, thought-provoking but not thrilling. In short, not essential enough to grab a distracted public’s attention.”

While most of the consciousness at Sundance these days revolves around commerce and Hollywood type deal-making, some major hard-hitting documentaries are shown, films we rarely see on TV. Ironically, one that I saw, “Concerning Violence,” was based on the text of 1960’s revolutionary and psychiatrist Franz Fanon who in his bestseller, The Wretched of the Earth, wrote that the road to decolonization was inevitably and necessarily a violent one.

A Swedish production, the film is competing with less controversial fare like a tribute to Utah’s native son, Mitt Romney. Sundance showed the Fanon-inspired film on the eve of the national holiday celebrating America’s most loved apostle of non-violence.

Coincidentally, just as the festival opened, President Barack Obama announced his reforms of the National Security Agency. The local Salt Lake Tribune reported that the reforms will not affect the opening of a new gargantuan NSA spy center, known as “the Point of the Mountain,” on another nearby mountaintop. According to the paper, “The Utah Data Center, a massive warehouse of computer servers at the Point of the Mountain, is largely a storage facility for the agency’s international intelligence gathering operations, expert say.”

That same weekend, amidst stories of a local snake collector complaining of being evicted because he kept 25 boa constrictors in his home, was a page-one report that the Defense Department had given a big present to the Utah state police in the form of deadly weapons, an arsenal of bullets and even a tank-like vehicle used in Afghanistan. So much for Dr. King: it looks like the Pentagon is now quietly preparing for insurrections in America.

Across the world, in Davos in the Swiss Alps, yet another mountaintop of distinction is being readied for a festive gab-fest for the elite of the elite, the pinnacle of “the 1 percent,” at the annual World Economic Forum that I have covered in years past.

Explains Christopher Dickey in the Daily Beast, “Even the high and mighty assembling at the Swiss resort recognize, now, that grotesque inequality is the greatest threat to world peace. Their answer: Party on!…

“Tonight as the little resort town begins to welcome 2,500 participants, including more than 40 heads of state, the forum itself is better organized than ever, it’s the rest of the world that’s not.  Nobody at Davos claims to be a master of the universe anymore. Hell, nobody would dare.”

Media Tenor, a research company that works for many major corporations issued a report on the finance industry that helps pay for the Davos Forum and that is a key cog in the world economy, reported:

“January 21, 2014. Davos, Switzerland With the image of banks at an all-time low, the industry is currently viewed with the same levels of negativity as organized crime, terrorism, and dictatorship, according to new research from Media Tenor International. This level of negativity, unseen in Media Tenor’s 20 years of research across all industries, positions banks as posing a greater societal risk than nuclear power or tobacco, stepping up pressure on regulatory bodies and central banks.

“The research, released this week at the World Economic Forum, highlights the critical risks banks face in maintaining their license to operate, while also underscoring the dangers society faces from an untrusted banking sector. The trust meltdown raises questions about how banks can possibly maintain their current client relationships and attract new business with their basic operations under attack by the media, while also suggesting a clear platform for politicians globally.”

Martin Wolf, editor of the Financial Times, practically the house organ of this annual display of “affluenza,” likens the situation today to the eve of World War I, a century ago, when the world’s rich and rulers stumbled towards that horrific conflagration.

(Somehow when 2012 rolled around, all the buzz was about Mayan prophecies; today, no one seems to remember how, in 1914, an assassination in Sarajevo triggered a World War. The same city was devastated a relatively few years ago with its mountaintops used by Bosnian fanatics as perches to kill innocent civilians. Now, it is all but forgotten.)

So, while awesome in their beauty, mountaintops are not any longer a pathway to the promised land. Not today, not in the world of inequality in which we live.

News Dissector Danny Schechter blogs at NewsDissector.net and edits Mediachannel.org. His new book in Madiba AtoZ: The Many Faces of Nelson Mandela. (Madibabook.com) Comments to dissector@mediachannel.org.

← Bob Gates’s Mean, Misguided Memoir
The Why Behind Egypt’s Coup →

2 comments for “The Mountaintops of the 1 Percenters”