Exclusive: Human Rights Watch, which has pushed for a U.S. military intervention in Syria, continues to blame the Assad government for the Aug. 21 Sarin attack even though the group’s high-profile map supposedly proving the case has been debunked, reports Robert Parry.

Despite the collapse of a key element in the U.S. government’s case blaming the Syrian government for the Aug. 21 Sarin gas attack outside Damascus, Human Rights Watch continues to insist in its annual report that “available evidence strongly suggests that government forces were responsible for the attack,” but the group doesn’t spell out any of that evidence.

Last summer, Human Rights Watch played a central role in pinning blame for the attack on the Syrian government by producing a map that supposedly retraced the flight paths of two rockets back to where they intersected at a Syrian military base, about 9.5 kilometers from where the rockets landed. In a front-page story, the New York Times embraced that analysis, which fit with the Obama administration’s claims that all Sarin-laden rockets had come from government-controlled areas and landed in rebel-held neighborhoods. 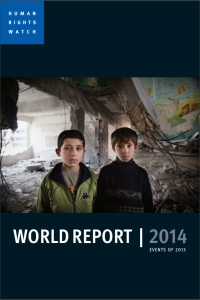 But it was that assertion about the rockets coming from government-controlled territory that has fallen apart over the past several months. First, as Consortiumnews.com reported, one of the two rockets in HRW’s map which landed in Moadamiya, south of Damascus, was found by United Nations inspectors to be clean of Sarin or any other chemical weapons agent, making its use in the “vector analysis” nonsensical. That rocket also clipped a building in its descent making a precise calculation of its flight path impossible.

Then, rocket experts analyzed the one home-made projectile which did test positive for Sarin after landing in the Zamalka neighborhood east of Damascus. They concluded that its maximum range was about two kilometers, meaning that it could not have come from the military base as Human Rights Watch and the New York Times had calculated. Finally, in late December, the Times grudgingly acknowledged its mistake in the 18th paragraph of a story buried deep inside the newspaper. However, Human Rights Watch has been even less forthcoming about its error.

HRW has been a leading proponent for a U.S. military intervention in Syria under the principle of the “responsibility to protect” or “R2P.” The best chance for such an intervention came with the international horror over the Sarin deaths on Aug. 21 and the possibility that the U.S. public could be stampeded into another Middle East war.

Some R2P advocates in the Obama administration, allied with influential neoconservatives at think tanks and media outlets, pushed for a retaliatory strike against the government of President Bashar al-Assad, a position also favored by Saudi Arabia and Israel, which detest Assad for his alliance with Iran and which hoped that a U.S. bombardment would create an opening for anti-Assad rebels to topple the government.

But at the last minute President Barack Obama decided to seek congressional approval for an attack and then accepted a Russian-brokered diplomatic solution in which the Syrian government agreed to surrender all its chemical weapons, while still denying that it carried out the Aug. 21 attack.

In its annual report, HRW continues to condemn the Assad regime for its brutal counteroffensives against rebel-held territories. Thus, the group might fear that a clear acknowledgement of a high-profile error over its “vector analysis” could undercut its overall indictment of the regime’s behavior. But resistance to such a retraction and HRW’s failure to delineate the other “available evidence” against the Syrian government could have the opposite effect, by undermining HRW’s overall credibility.

[For more details on this issue, see Consortiumnews.com’s “The Mistaken Guns of Last August” and “NYT Replays Its Iraq Fiasco in Syria.” For more of our early reporting on the Syrian chemical weapons attack, see: “A Dodgy Dossier on Syrian War”; “Murky Clues From UN’s Syria Report”; “Obama Still Withholds Syria Evidence”; “How US Pressure Bends UN Agencies”; “Fixing Intel Around the Syria Policy.”]