A core myth about Robert Gates was that he was an “adult” who would bring wisdom and order to the administrations of George W. Bush and Barack Obama. But the reality was always different as his score-settling memoir reveals, writes ex-CIA analyst Paul R. Pillar.

Stop the presses: Robert Gates has a revealing memoir that provides penetrating new insights into how Washington works. Such as that election considerations influence how presidents, and presidential aspirants in senior positions, speak and behave. And that Congress is a dysfunctional place where members ask hostile and impertinent questions at hearings. And that different parts of the Executive Branch compete with each for influence.

Oh, wait, we already knew all that. We also knew, and some of us have even written about, more specific things such as how Barack Obama’s history of contrasting the “good war” in Afghanistan with the bad one in Iraq shunted him onto the politically attractive but strategically questionable track of ramping up to a short-lived “surge” in Afghanistan before quickly ramping down. 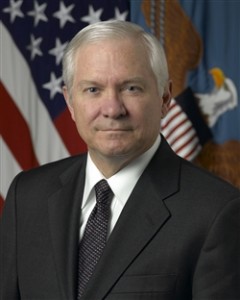 We also knew, or should have known, what is being revealed about Robert Gates, although the public imaging success that this master of reputation preservation has enjoyed through the years has made that sort of insight less obvious. Gates has throughout his career been especially adept at seeing that responsibility and accountability for what is unsuccessful, untoward, or unpopular stops at levels just below his own.

This has included levels inhabited by members of the uniformed military on whose behalf he has presented himself as a defender. Now it appears that the sort of blame-shifting techniques that he has long employed downward he also, having walked out the door of public service, can use sideways and upwards as well.

The lead tidbit in Bob Woodward’s front-page summary of Gates’s memoir concerns President Obama’s purported disbelief in the mission in Afghanistan. Such a disbelief is not uncommon, if by missions we mean declared, official missions. The real reasons, sometimes political but sometimes more strategic, that wars get fought may not be publicly and politically sellable, and purported missions that can be sold may not be achievable.

The Vietnam War was purportedly fought to save South Vietnam from communist conquest, but from the beginning of that war policy-makers in the Johnson administration did not think achievement of that goal was likely.

McGeorge Bundy, the national security adviser, put the odds of winning the war as low as 25 percent. He told President Johnson in a memo in February 1965, however, that a major military effort was nonetheless worthwhile because it would “damp down the charge that we did not do all that we could have done, and this charge will be important in many countries, including our own.”

It was the familiar theme about upholding U.S. credibility, a theme one hears today in discussions of the U.S. role in Afghanistan.

Disingenuous rationales for wars can have their own problems, but whether a leader believes in the officially declared mission is less important than whether the actual objectives of fighting a war are valid, achievable, and worth the cost. The Johnson administration policymakers made the wrong decision in 1965, leading to three years of escalation that not only demonstrated that the pessimism about winning the war was well-founded but also included most of what would be 58,000 American deaths in the war.

The makers of surges in Iraq and Afghanistan probably made the wrong decisions. First, because the politically driven actual reasons for the surges were not valid actions on behalf of the national interest: George W. Bush wanted to salvage a temporary modicum of stability to have something to show for the blunder of launching the war, and Obama wanted to show he wasn’t a wimp.

And second, because neither surge has bought long-term political stability and accommodation in either Iraq or Afghanistan, with the current violence in Anbar being an especially salient demonstration of this in Iraq. But Obama, after the blip of the surge in Afghanistan, has made the right decision in resuming withdrawal.

The single most consequential war decision for Americans since those concerning Vietnam in the 1960s was the invasion of Iraq in 2003. In contrast to Obama, who opposed the Iraq War from the beginning, Gates was on the wrong side of that issue. He claims in the book that he does not know what he would have recommended to Bush at the time, but in his confirmation hearing to be Defense Secretary he stated that he supported the invasion.

In the get-with-the-program hothouse that was the Bush administration during its march toward war, and considering how Gates responded to the similarly strong anti-Soviet imperative of the Reagan administration, it is highly unlikely that he would have expressed in office any more skepticism about launching the war than he did as a private citizen.

Books that paint a picture of a single righteously indignant official manning the barricade against politically crazy and dysfunctional Washington do not teach us much of anything about how Washington works or about making better decisions about war and peace in the future.

Those seeking retrospective insight from a former Secretary of Defense would do better to consult the book Robert McNamara wrote about the Vietnam War. That book had nothing to do with personal reputation enhancement; the author fully accepted that he was a major part of the collective sinking into a tragic debacle. And because of that, his observations are honest and genuinely insightful, not only about the Vietnam War experience but about national security decisions yet to be made.