Exclusive: Amid last summer’s rush to judgment on the Aug. 21 Sarin attack in Syria, the New York Times joined the stampede blaming the Assad regime by pushing a “vector analysis” showing where the rockets supposedly were launched, but now that certainty has collapsed, reports Robert Parry.

Ake Sellstrom, the head of the United Nations mission investigating chemical weapons use in Syria, agrees that the vector analysis at the heart of the New York Times’ indictment of the Syrian government for the deadly Aug. 21 Sarin gas attack doesn’t stand up to scrutiny.

In a little-noticed comment at a UN press conference on Dec. 13, Sellstrom disputed claims that the launching point for the two missiles, which were recovered after the Aug. 21 attack, could be traced back following the angles of their final descent until they intersected at a Syrian military base about 9.5 kilometers away. 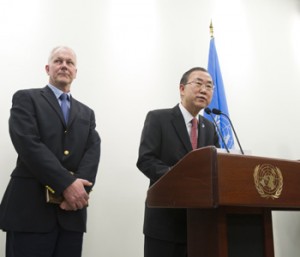 Instead, Sellstrom said he accepted as accurate other analyses that estimated the range of the rockets at about two kilometers. “Two kilometers could be a fair guess,” he said, noting that the UN team had consulted its own missile experts on the subject. “If you simulate the flight path, it seems not to meet as may be indicated in the report.”

In other words, the lead author of the UN report on the Aug. 21 incident has contradicted the much-touted “vectoring” claims of a New York Times front-page story and Human Rights Watch, which has been pushing for a U.S. military intervention in Syria. Their “vector analysis” of the two flight paths implicated an elite Syrian military unit, the 104th Brigade of the Republican Guard, based northwest of Damascus, near the Presidential Palace.

Since the two short-range rockets had a maximum range much less than 9.5 kilometers and one of the rockets clipped a building during its descent making any assumptions about its flight path unreliable the Times’ and the HRW’s “vector analysis” has essentially been debunked, although the Times and other major U.S. news outlets have been hiding that revelation from the American public.

Rather than serving as honest brokers evaluating the Syrian evidence fairly and openly the Times and most of the mainstream U.S. media have simply reprised their propaganda roles played so disastrously a decade ago in the run-up to the Iraq War. In the case of Syria, only President Barack Obama’s last-minute change of mind about authorizing a retaliatory strike prevented the U.S. military from going to war in Syria.

Sticking by the Story

Despite the collapse of the Times/HRW “vector analysis” and the continuing failure of the Obama administration to present any public evidence supporting its allegations of Syrian government guilt Ambassador to the UN Samantha Power and other senior U.S. officials continue to insist that the regime of President Bashar al-Assad is guilty of the Aug. 21 attack.

But the UN inspectors have voiced uncertainty about who carried out the attack. At the press conference, Sellstrom admitted, “I don’t have information that would stand in court.” He also told Wall Street Journal writer Joe Lauria that both sides in the conflict had the “opportunity” and the “capability” to carry out chemical weapons attacks. [See WSJ, Dec. 16, 2013]

Sellstrom’s statements further undermine the outward certainty of U.S. officials who have claimed that only the Assad regime could be responsible for the Sarin attack. Sellstrom’s team found some evidence of other Sarin incidents in Syria, suggesting that rebel forces have developed the capability of deploying chemical weapons.

Besides the roughly 2 kilometer-range of the rockets and the problem of one rocket striking a building on its descent thus throwing off any precise calculation of its flight path, the Times’/HRW’s “vector analysis” is further undercut by the fact that no Sarin was found at the site of the missile landing in Moadamiya, south of Damascus.

The only rocket apparently carrying Sarin was the one that landed in Zalmalka/Ein Tarma, east of Damascus. Logically, it’s impossible to do a “vector analysis” of missiles carrying Sarin if there was only one such missile.

The Times’ front-page “vectoring” article of Sept. 17, thus, is reminiscent of its infamous “aluminum tube” story in September 2002, a highly misleading article that neatly dovetailed with President George W. Bush’s public relations strategy for manipulating the American people into supporting an unprovoked invasion of Iraq. Now, the Times is playing a similar propaganda role in connection with Syria.

To meet even minimal standards of journalistic ethics, the Times should publish a new article incorporating the emerging consensus now including the head of the UN investigative team that the “vectoring” story was nonsense. But the Times has simply continued to present one-sided articles blaming the Assad regime for the Aug. 21 attack.