From the Archive: Though largely forgotten, the brief U.S. invasion of Panama in 1989 established key precedents that would reappear in later conflicts from the Persian Gulf and Kosovo to Afghanistan and Iraq policies shaped, in part, by Gen. Colin Powell, as Robert Parry and Norman Solomon wrote in 1996.

By Robert Parry and Norman Solomon (Originally published in 1996)

From the Vietnam War and the Iran-Contra scandal, Colin Powell had learned the hard lessons of waging modern warfare. Combat was now only a modest part of the mix, exceeded by a larger dose of politics and an even-bigger part, P.R.

As for combat, Powell’s bitter Vietnam experience had taught him one overriding military principle, a rule that might be summarized as: “it’s better to win than to lose.” The Powell Doctrine of overwhelming force would follow. 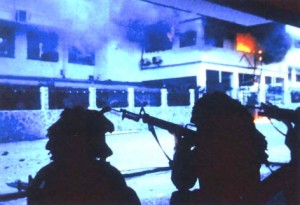 But Powell also understood that warfare, as waged by the United States in the late 20th Century, no longer conformed to the famous dictum: diplomacy by other means. War had become the violent outgrowth of the political/media gamesmanship that was played along the Potomac. In an age when the best-known journalists were TV pundits, diplomacy was too grand a word for the spasms of war fever that would occasionally grip the capital.

“Once you’ve got all the forces moving and everything’s being taken care of by the commanders,” Powell advised other senior officers at the National Defense University in 1989, “turn your attention to television because you can win the battle [and] lose the war if you don’t handle the story right.”

In other words, the fickle political mood of Washington could decide the outcome of conflicts and of careers, so it was a military imperative to cultivate the opinions of the media elite. “A great deal of my time is spent sensing that political environment,” Powell explained.

Powell’s commitment to winning in “that political environment” had transformed the general into a very tough Washington “player,” albeit one with a friendly smile and an easygoing manner. Powell counted among his most valued contacts many of the top journalists in Washington.

As Ronald Reagan’s last national security adviser, Powell was highly regarded as an expert spinner who successfully limited the damage from the Iran-Contra scandal in 1987-88. He could wow reporters in White House background briefings or schmoose their bureau chiefs over lunch at the nearby Maison Blanche restaurant.

Yet, at the start of George Bush’s presidency, Powell wanted a respite from Washington and got it by assuming command of Forces Command at Fort McPherson, Georgia. That posting also earned the general his fourth star. But his sojourn into the regular Army would be brief, again. Behind the scenes, the Bush presidency was hurtling toward another confrontation with a Third World country, this time Panama.

On June 21, 1989, in secret, the Justice Department promulgated an extraordinary legal opinion, asserting the president’s right to order the capture of fugitives from U.S. laws even if they were living in foreign countries, even if the arrest meant ignoring extradition treaties and international law. The opinion had specific relevance to U.S.-Panamanian relations because a federal grand jury in Florida had indicted Panama’s military leader, Gen. Manuel Noriega, on drug-trafficking charges.

By August, Bush and his defense secretary, Dick Cheney, were urging Powell to return to Washington where he would become the first black chairman of the Joint Chiefs of Staff. On his first day on that new job — Oct. 2, 1989 — Powell joined debates about whether to intervene in support of a home-grown Panamanian coup attempt aimed at ousting Noriega.

“The whole affair sounded like amateur night,” Powell wrote in his memoirs, My American Journey. “Cheney, [Gen. Max] Thurman and I … agreed that the United States should not get involved.” Bush went along with his military advisers — and with only minimal U.S. help, the coup failed. Noriega promptly executed the plot’s organizer.

In the wake of the coup attempt, Bush came under fierce criticism in the news media and in Congress. TV’s armchair-warrior pundits had a field day mocking Bush’s supposed timidity. Rep. David McCurdy, D-Oklahoma, spoke for many when he declared: “There’s a resurgence of the wimp factor.”

According to Bob Woodward’s book, The Commanders, Powell was stunned. He had never seen “piling on of this intensity, and across the whole political spectrum. It was as if there was a lynch mob out there.” Even more unsettling, Powell saw his own leadership at the JCS jeopardized by Washington’s super-macho political environment.

Neither Bush nor Powell would make the same mistake again. The two leaders quickly built up U.S. forces in Panama, as the administration spoiled for a fight and as Noriega shouted his defiance. During this period, Woodward quoted Powell as saying, “we have to put a shingle outside our door saying, ‘Superpower Lives Here’.”

In mid-December 1989, the tensions exploded when four American officers in a car ran a roadblock near the headquarters of the Panamanian Defense Forces. PDF troops opened fire, killing one American. Another American officer and his wife were detained for questioning. After their release, the officer alleged that he had been kicked in the groin and that his wife had been threatened with rape.

When word of this humiliation reached Washington, Bush saw American honor and his own manhood challenged. He possibly could hear, too, the pundits hooting about his cowardice if he didn’t act. Powell recognized the need for decisive action. On Dec. 17, he recommended to Bush that a massive U.S. military force capture Noriega and destroy the PDF, even though the assault would result in many civilian casualties and violate international law.

On Bush’s orders, the invasion began on Dec. 20, with Powell and Cheney monitoring developments at the Pentagon. The high-tech American assault force, using the F-117 Stealth aircraft for the first time, incinerated the PDF headquarters and the surrounding civilian neighborhoods. Hundreds of civilians — some human rights observers would say thousands — perished in the first few hours of the attack. An estimated 315 Panamanian soldiers also died, as did 23 Americans. But Noriega eluded capture.

Despite that temporary setback, Powell did not forget his own dictum about putting the best spin on a story. Stepping before cameras at the Pentagon, Powell declared victory and downplayed the disappointment over Noriega’s disappearance. “This reign of terror is over,” Powell declared. “We have now decapitated [Noriega] from the dictatorship of his country.”

In the following days, as U.S. forces hunted for the little dictator, Powell demonized Noriega over the supposed discovery of drugs and voodoo artifacts in his safehouse. Powell started calling Noriega “a dope-sniffing, voodoo-loving thug.” (The white powder in Noriega’s house that was initially called cocaine would turn out to be tamale flour.) When asked once too often about the failure to capture Noriega, Powell told the reporter to “stick it.”

The tragedies on the ground in Panama could sometimes be worse. On Dec. 24, shortly after midnight, a nine-months-pregnant Panamanian woman, Ortila Lopez de Perea, went into labor. She was helped into the family Volkswagen which was marked by a white flag. With her husband, her mother-in-law and a neighbor, she headed to the hospital.

At a U.S. military roadblock on the Transisthmian Highway, the car stopped. The four Panamanians requested an escort, but were told that one wasn’t necessary. After being waved through, they drove another 500 yards to a second checkpoint. But at this spot, the young American troops mistook the speeding Volkswagen for a hostile vehicle. The soldiers opened up with a 10-second barrage of automatic rifle fire.

When the shooting stopped, Lopez de Perea and her 25-year-old husband Ismael were dead. The neighbor was wounded in the stomach. The mother-in-law, though unhurt, was hysterical. The unborn baby was dead, too.

The U.S. government would acknowledge the facts of the shooting, but refuse any compensation to the family. The Southern Command concluded that its investigation had found that the incident “although tragic in nature, indicate[s] that the U.S. personnel acted within the parameters of the rules of engagement in effect at that time.”

On the same day as the tragic shooting, Manuel Noriega finally re-emerged. He entered the papal nuncio’s residence and sought asylum. The United States, however, demanded his surrender and bombarded the house with loud rock music. On Jan. 3, 1990, in full military uniform, Noriega surrendered to U.S. Delta Forces and was flown in shackles to Miami for prosecution on the drug charges.

With Noriega’s surrender, the Panamanian carnage was over. Two days later, the victorious Powell flew to Panama to announce that “we gave the country back to its people.”

In his memoirs, Powell noted as downsides to the invasion the fact that the United Nations and Organization of American States had both censured the United States. There were also the hundreds of civilian dead. They had been, in effect, innocent bystanders in the arrest of Manuel Noriega.

“The loss of innocent lives was tragic,” Powell wrote, “but we had made every effort to hold down casualties on all sides.” Some human rights organizations would disagree, however, condemning the application of indiscriminate force in civilian areas.

“Under the Geneva Accords, the attacking party has the obligation to minimize harm to civilians,” one official at Americas Watch told us. Instead, the Pentagon had shown “a great preoccupation with minimizing American casualties because it would not go over politically here to have a large number of U.S. military deaths.”

But for the Inside-the-Beltway “players,” there was no political price to pay for excessive violence against Panamanians.