An odd aspect of modern American life is that even with 24-hour news and its roster of blathering pundits, many creative thinkers with valuable insights are blacklisted from mainstream media, perhaps most notably Noam Chomsky who turned 85 on Dec. 7, as Jeff Cohen reflects.

This month, Noam Chomsky turned 85 and he’s the subject of a new animated movie focused on his scientific and social philosophies. He has actually seen this movie, unlike other works about him: “I can’t stand watching myself.”

He’s one of the world’s best-known intellectuals and one of the least vain. Or elitist. Put him in a roomful of a thousand social activists (not uncommon surroundings for him) and you’ll see him attempt to meet each of them, one-by-one, until he’s physically removed to rush to the airport or next appointment. 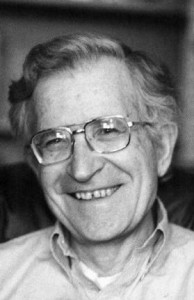 Standing at a podium in his usual brown corduroy sport jacket, he laces his lectures with biting sarcasm toward corporate malefactors, warmongers and their sycophants among intellectual and media elites. But with regular folks, he’s a model of gentleness and compassion that would make Eugene Debs blush with envy.

I saw Noam Chomsky as my mentor way before we ever met. When I was in college in the late 1960s/early’70s, he was already a guiding light for me, an exemplar of how those with privilege and principles should live our lives.

I started reading Chomsky’s criticism of the Vietnam War when I was 17, and that’s when I first heard him speak. It was November 1969. Visiting a friend in Boston, I joined militant demonstrations aimed at shutting down the war research labs at MIT. Chomsky spoke to the activists assembled from across the Northeast; he was one of only a couple MIT professors willing to support the confrontational protests. (A large majority of MIT profs had voted to support an injunction against the protests.)

In Chomsky’s political writings of that period, I remember a focus on the sanitized language that accompanied U.S. war crimes in the Vietnam conflict (“a euphemism for U.S. aggression”) — such as strategic hamlets (“concentration camps”) to protect the Vietnamese from guerrillas (“whom they were largely supporting”).

His press critiques helped turn me into a media critic, and in 1986 I founded the media watch group FAIR. Chomsky was so influential that I sometimes wonder if FAIR would exist if not for him. He was one of the first people I asked to join our advisory board — he readily said yes, and has supported FAIR ever since. He spoke at the organization’s 25th birthday party in 2011.

Today he’s still largely blacklisted, but the embargo matters less in the new media environment of Internet and nonprofit publishers able to create bestsellers. His books and speeches are now much more accessible in the U.S.  . . .  though nowhere close to the intellectual offerings of the Coulters and O’Reillys.

In the years that we challenged media decision-makers over the Chomsky blacklist, it was clear they were even less informed about Chomsky than on other issues. A few thought he was some kind of Holocaust denier. Or “Stalinist defender.” As any googler can quickly learn, Chomsky is not a Stalinist, but a proud anarchist — a skeptic of both state and private authority, and of hierarchy. It’s another reason he’s so supportive of FAIR; he likes that it grew into a collective, with most decisions made by the staff as a whole.

In the late 1980s, I sat with Chomsky before a FAIR fundraiser in Los Angeles and asked him if he was aware that a number of celebrities in movies and music were big fans of his. He was unaware and couldn’t have cared less. I ran a few well-known names by him he’d heard of none of them, and had no interest in meeting them  . . . unless it would help FAIR. He had far more interest in mingling with peace and justice organizers.

One of the highpoints for me in all the years at FAIR was watching Noam Chomsky appear as a guest on PBS’s MacNeil/Lehrer NewsHour in 1990. He was invited after FAIR published our first study of the NewsHour, which revealed that its guest list was even narrower and more conservative than that of commercial news programs.

The widely-discussed study proved embarrassing to the NewsHour and had some impact. A major foundation soon quit funding the show. And, for a while, the program slightly broadened its guest list by making The Progressive magazine’s editor a regular pundit.

In another gesture at broadening, Chomsky was asked to make his first (and it turned out, last) appearance on public TV’s NewsHour. The date was Sept. 11, 1990. What Chomsky said on the show was totally clear and would not have surprised anyone even slightly familiar with his work. But it seemed to confuse interviewer Robert MacNeil.

CHOMSKY:  It’s been a leading, driving doctrine of U.S. foreign policy since the 1940s that the vast and unparalleled energy resources of the Gulf region will be effectively dominated by the United States and its clients, and, crucially, that no independent, indigenous force will be permitted to have a substantial influence on the administration of oil production and price. That’s been a leading principle of U.S. foreign policy since the 1940s, and, I think, it remains so, as we see.

MacNEIL:  And a valid principle, in your view?

At hearing MacNeil’s question, Chomsky paused, apparently wondering if it was a joke or trick question of some kind. Chomsky then replied: “That principle is not a valid principle in my view.”

In fairness to MacNeil, his confusion seemed to stem from never having interviewed a U.S. citizen before on the NewsHour who believed that imperialism and the taking of other people’s resources were bad things. We wrote up Chomsky’s appearance (with a chunk of transcript) in FAIR’s magazine, beneath the headline:

Weeks later, I introduced Chomsky at a large FAIR conference in Los Angeles; I mentioned his recent PBS guest spot and got a big laugh by referring to our jokey headline “Western Civilization Survives.” Amid the laughter, I could hear Chomsky off-stage behind me, saying, “Oh, heck!” disappointed by his ineffectiveness.

While he didn’t succeed through that one TV appearance in bringing an end to Western imperialism, or what passes for Western Civilization, he goes on trying at age 85. Happy birthday, Noam!

Jeff Cohen is director of the Park Center for Independent Media at Ithaca College, founder of FAIR, and author of Cable News Confidential: My Misadventures in Corporate Media. In 2011, he cofounded the online activism group RootsAction.org.

12 comments for “The Blacklisting of Noam Chomsky”