The Israeli government is planning to build more and more walls to keep Palestinians and Arabs out of Jewish-held territory, a troubling twist on a dark history when walls were used to lock Jews in, Lawrence Davidson observes.

Israeli Prime Minister Benjamin Netanyahu has announced his government’s intention to construct another “separation barrier” – a large fortified wall or fence referred to by Palestinians as an apartheid wall – “between the West Bank and Jordan after completing walls on the Egyptian and Syrian borders.”

Netanyahu is doing this for a variety of reasons, such as to keep Arab and other non-Jewish refugees from coming into Israel and, in the case of the West Bank-Jordan wall, to symbolize Israel’s ongoing control of the area. 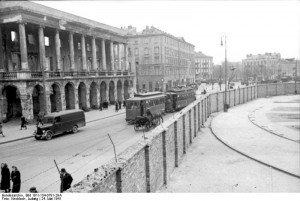 A wall erected around the Warsaw Ghetto in Poland in 1941.

The original Zionist rationale for the state of Israel was that it would serve as a place of safety for the world’s Jews as anti-Semitism played out its allegedly inevitable and horrid destiny. Well, the problem today is that the policies of Israel are the major motivators of worldwide anti-Semitism, and because of these same policies, there is no place in the world more potentially dangerous for Jews than Israel.

Thus, the Israeli fondness for walls. It may very well be that when all of this wall construction is finished, Israel will look like the world’s largest ghetto. And, within these walls, Israel’s leaders are busy making their ghetto religiously pure.

Just this week buildings occupied by 15,000 East Jerusalem Arabs were scheduled for demolition. Those serving the notices to the 200 residential blocs had to be “escorted by Israeli soldiers.” Thus, while the walls discourage the non-Jews outside from breaking in, the home demolitions (along with a host of other nasty policies) encourage the inside non-Jews to get out.

It makes not a bit of difference that all this wall building, to say nothing of the accompanying ethnic cleansing, is illegal. The Israelis don’t care. They make their own “law” based on their military capacity to enforce their will, and their perverted psychology – the belief that their past suffering (at least that of the Jews of Europe) somehow justifies imposing suffering on others.

Historically, what sort of company does Israel keep with all this wall building?  Here are some examples set down in chronological order:

— The walls of Jericho

Jericho is a West Bank town that, according to the archaeological evidence, has existed for about 9,000 years. It is also a place dear to the hearts of militant Zionists, for it was there, according to the biblical narrative, that the ancient Israelites began the first bloody conquest of Palestine.

According to the legend (but not the archaeological evidence), Joshua led an ancient Israelite army against Jericho and, on God’s orders, marched around the town walls six times blowing rams’ horns as they went. On the seventh revolution, Jericho’s defensive walls “came tumbling down.”

Then Joshua burned down the town and, again on God’s orders, slaughtered every man, woman, child and animal (except for the family of the woman Rahab, who had betrayed the city by hiding Israelite spies). Finally, Joshua placed a curse on anyone who might try to rebuild the place. From a Zionist perspective, this may mark one of the few times that tearing down walls seemed preferable to building them up.

The Wailing, or Western, Wall was not a defense structure. Rather it was part of a courtyard adjacent to the Second Temple. The courtyard was originally part of an expansion program begun in about 19 BCE during the reign of Herod the Great. The Second Temple was eventually destroyed, along with much of the rest of Jerusalem, by the Romans in 70 CE. The Western Wall is all that is left. This destruction established the fact that it was not only Israelite armies that could bring down other people’s walls. Gentiles could do it too.

Nonetheless, this provenance has made the Western Wall “the most sacred site” in the Jewish religion. When the Israelis took Arab Jerusalem in 1967 they turned the sacred site into a nationalist shrine. From that point on, there has been an unspoken assumption among militant Zionists that this holy of holies could stay Jewish only if the subsequently created barrier walls and their accompanying policies of ethnic cleansing stood firm. That makes the “separation barriers” the real symbols of modern-day Israel.

In modern times some walls have taken on a sinister character for Jews. The archetypal modern ghetto wall was constructed by the Nazis in 1940 to enclose the Jewish quarter of Warsaw, Poland. It was made of brick, stood about 10 feet high and ran for 11 miles. Like the Western Wall, only a fragment of this ghetto wall survives.

While Zionists consider any comparison between their “separation barriers” and the walls that separated out Europe’s Jews anathema, some other very knowledgeable Jews see a connection. For instance, Sygmunt Bauman, a well-known Polish-Jewish sociologist who once taught in Israel but now lives in England, has likened Israel’s present-day barriers to those that surrounded the Warsaw ghetto. He believes that successive Israeli governments have not been interested in peace and “a younger Israeli generation was being raised on the understanding that the state of war and military alert was natural and unavoidable.” That would certainly fit well with a culture of walls.

Comparisons have also been made between Israel’s “separation barriers” and the infamous Berlin Wall. Constructed by communist East Germany starting in 1961, the Berlin Wall separated the East German population from West Berlin. The Berlin Wall ran for some 87 miles and at its completion was almost 12 feet high. On its eastern side it was paralleled by a 110-yard “death strip” offering a “clear field of fire for the wall guards.” By comparison, the Israeli wall will at completion run over 400 miles, be 26 feet high, and be paralleled by a 200-foot “exclusion zone.”

Like the Berlin Wall, Israel’s walls are designed to separate populations, but unlike the one in Berlin, the Israeli version also facilitates the systematic ethnic cleansing of elements of the Palestinian population. It is perhaps for this reason that the musician Roger Waters, a strong supporter of the boycott Israel movement, called the Israeli separation barriers “100 times more horrifying than the Berlin Wall.”

Walls on the ground reflect walls that already exist in the mind. The Zionists came to Palestine with a wall already fixed in their minds. That wall existed as a conviction that anti-Semitism was inevitable and eternal. Only possessing their own state could protect the Jews from this incessant danger.

Subsequent Palestinian resistance was almost instinctively seen by the Zionists as anti-Semitism. In time this led to 26-foot walls, which one can understand as the physical manifestations of the mental wall all Zionists carry with them. In this sense a culture of walls comes naturally to the Zionists.

From a historical perspective, no physical wall can be permanent. Things change and walls crumble. The walls in our minds might prove more resistant to erosion. They can be very deep-rooted and passed on for generations. Yet even these barriers eventually give way. That suggests that Israel’s culture of walls will someday be breached. It is just a matter of time and suffering.